With Sanders All But Done, Clinton and Trump Face Off 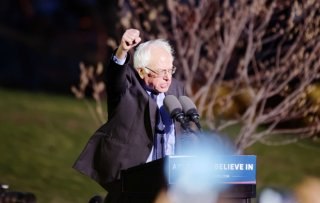 Tuesday night’s primaries left Bernie Sanders in a position similar to the one former New England Patriots running back Kevin Faulk, who will be the next inductee into the team’s hall of fame, found himself in back in 2012.

Faulk wanted to return for a fourteenth season. He remained unsigned. Finally, in October of that year he retired. Why? Because not being retired at that point meant little more than waiting for his successor Danny Woodhead to sustain a season-ending injury.

Sanders wants to fight on until the Democratic convention in Philadelphia. Even if he got the big win in California that he was hoping for, it would have been a tough sell for him to convince the superdelegates, the very party establishment he has reviled throughout his whole campaign, to take the nomination away from Hillary Clinton who has won the most popular votes, pledged delegates and states. Said big win didn’t materialize.

Moreover, Sanders would be asking Democrats to take a pass on the historic nomination of the potential first woman president to take a flyer on a septuagenarian socialist senator from Vermont.

At that point, for Sanders not suspending his campaign means little more than waiting for Clinton to be indicted over her State Department emails. There is going to be pressure on him to hang it up, potentially starting when he meets with President Barack Obama on Thursday.

That means we will finally get the Clinton versus Donald Trump race polls say relatively few of us have been waiting for. It has so far been a volatile campaign and the conventional wisdom has shifted rapidly.

Trump looked like he had blown it after losing the Wisconsin primary and getting outhustled at state conventions by Ted Cruz. We weren’t too deep into May before Cruz’s campaign was over and Trump had secured a majority of his party’s delegates before Clinton had nailed down hers.

Clinton was similarly left for dead by at least a few pundits amidst an eight-state losing streak that saw her national poll numbers against Sanders fall into a dead heat. The delegate math always made this less realistic than some other Republican upsetting Trump and it didn’t last long. Democrats are now basking in Clinton’s historic impending nomination.

The past week or so has reminded us of Trump’s flaws as a candidate. He lacks self-control or what political professionals like to call “message discipline.” He never quits while he is ahead. He does not speak about race or ethnicity with sensitivity. He is a risk-taker to a fault.

Ever since Clinton’s Twitter etiquette lecture masquerading as a foreign- policy address, it has been clear what her campaign message will be: this guy is nuts. He is “temperamentally unsuited.” He will fire off nukes like mean tweets. If you are a woman or a Hispanic or a person who does not like to be nuked, be very afraid.

Trump’s counterargument has been clear for a while: the Clintons are crooks. When they are not collaborating to shake down taxpayers or rent-seekers, they are enabling each other in their individual misdeeds. This counterargument would be clear, that is, if Trump would stop worrying about random grievances and focus on it.

That’s what Trump tried to do Tuesday night. Most commentators said his remarks contained no apology for his recent obsession with Judge Gonzalo Curiel and his Mexican heritage. That is technically true, but Trump rarely directly apologizes.

Trump did three things that lightly touched on the controversy in ways that were designed to reassure mainstream Republicans: he spent most of his time engaging in GOP-pleasing, party-unifying attacks on the Clintons; he acknowledged he now had custody of the Republican mantle and implicitly promised not to embarrass the party again; he emphasized that his desire to protect American workers was not contingent upon their background and applied equally to the first- and the tenth-generation American.

The presumptive Republican nominee has better gut-level political instincts than his Democratic counterpart. But Clinton still has a few big advantages. She is the choice of an overwhelming majority of elected Democrats, liberal opinion leaders and pop culture icons and the mainstream media. Even most who prefer Sanders can live with her.

Trump isn’t the choice of most Republican elected officials, conservative opinion leaders or really much else outside of a few websites, columnists and radio talk show hosts (give or take a plurality of Republican voters). So if he screws up, he will have few defenders. If Clinton screws up, the defenses will be deafening.

Almost nothing could happen in the State Department email case that would cause Nancy Pelosi to disavow Clinton. It wouldn’t take much to get Paul Ryan to rebuke Trump, as we’ve already seen.

Trump has benefited from being an outsider. He may do so again, as his status as a change agent is how he will compete with Clinton’s attempts to remind voters they may grow weary of his antics. But there will be times when he needs the party behind him. It seems it will only be there when he does things right.

You need loyalty in politics. I wanted Faulk to suit up for one more season. Sanders’ voters probably want him to keep running for president. Unfortunately, when it comes to thirty-six-year-old running backs and badly trailing candidates, cooler heads often prevail.