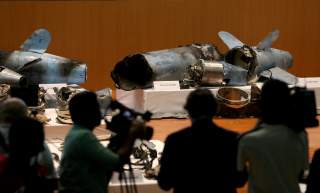 When more than twenty drones and cruise missiles attacked Saudi Arabia’s energy infrastructure recently, they took down approximately half of the kingdom’s oil production.

The fires were quickly extinguished, but the impact will have long lasting energy security and geopolitical implications for Saudi Arabia and the rest of the world.

The surgical strike on Abqaiq and Khurais, allegedly conducted by Iran, but claimed by the Yemeni Houthis, took offline more than 5.7 million barrels of oil capacity—about 5 percent of the world’s global oil supply. In the ensuing ten days, Aramco, the country’s national oil company, rushed to assure customers that it will be able to restore operations and honor all its contractual obligations. However, experts claim that it is highly unlikely that Aramco can restore full production capacity in under eight months.

These events highlight the stark vulnerability of Saudi Arabia’s energy infrastructure, and the serious geopolitical risks inherent in President Donald Trump’s decision to walk away from the Iran nuclear deal. The administration’s rationale was that tougher sanctions would economically starve Iran and force it to sign a much less favorable agreement. Trump’s plan succeeded in hurting Iran’s economy, but Iran—in order to maximize its negotiating strength—has scaled up its attempts to disrupt energy markets.

For most of the last four decades, Saudi Arabia has been the largest oil producer and exporter in the world. Therefore, it made economic sense to leverage economies of scale by building very large centralized facilities, but, as the attacks have shown, this created a critical systemic risk. To be repaired, these highly-sophisticated plants require costly made-to-measure parts and equipment that will take contractors months to manufacture, deliver, and install.

During this time, Saudi Arabia could lose upwards of $300 million per day or slightly less than $75 billion dollars over an eight-month period in lost production alone. This will put a serious dent in the Saudi treasury and make it extremely difficult for the kingdom to meet its commitments to domestic social programs—commitments that are critical to the internal stability of the country.

To raise the funds needed to diversify its oil dependent economy, the Saudi government planned to sell 5 percent of Aramco, through an initial public offering. Now, it is unclear if the sale will happen, as potential buyers will need to factor in both the systemic infrastructure weakness and the geopolitical risk.

How vulnerable is Saudi Arabia’s energy infrastructure? If a single armada of drones can make its way across the Saudi airspace undetected and successfully hit targets with surgical precision and maximum damage, then one must conclude the vulnerability quota is quite high. What if there was a full-scale war with Iran—how difficult would it be to take out a vast majority of Saudi’s centralized energy infrastructure? Furthermore, the kingdom’s infrastructural vulnerability goes beyond its energy industry, about 50 percent of its water supply—which is critical for a desert country—is produced by several large desalination plants. The capital of Riyadh, located in the heart of the country, is supplied with desalinated water pumped from the Persian Gulf over 467 kilometers away. If this complex were to be bombed, then it would affect water supply for 7.7 million people.

Going forward, the Saudis should integrate more flexibility and redundancy into their infrastructure, but this will take many years and substantial funds.

In the short term, Saudi Arabia’s choices are limited. It could strike back at Iran, risking starting a war, which it would be unlikely to win without significant support from the United States—support which does not seem to be forthcoming. A war could result in the complete destabilization of global oil markets. Or more realistically, all the parties can finally begin negotiations to see if there is a pathway to settle the major issues dividing the region—the war in Yemen, Iran’s decision to restart its nuclear enrichment program, and the continued impositions of economic sanctions that are successfully starving Iran’s economy. There is no guarantee that such negotiations will succeed, but the alternative will have dire consequences to Saudi Arabia, the region, and the stability of the world’s energy and economic markets.