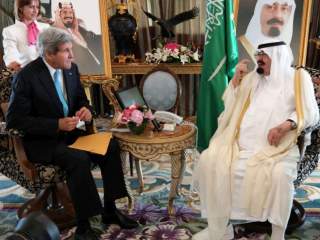 Motivated by old and new security anxieties, and above all, by its sectarian competition with Iran, Saudi Arabia is playing a new game in South Asia. In a dramatic shift from prior decades, warming ties with India have already served Riyadh well by steering New Delhi away from a closer partnership with Tehran. Separately, reenergized links with Pakistan offer Riyadh even more potent ammunition to counter Iran’s nuclear and regional ambitions.

Although Western analysts tend to view Saudi policies through a Middle Eastern lens, Riyadh’s South Asia play is a high-stakes gambit with direct consequences for Iranian nuclear developments, the war in Syria, Pakistan’s stability and Indo-Pakistani peace. Fortunately, if Washington is clever and a little lucky, many of Riyadh’s moves with Islamabad and New Delhi can be turned to the U.S. advantage.

Throughout its modern history, the insular and fabulously wealthy Saudi monarchy has grappled with domestic and regional security anxieties despite extraordinary military expenditures. At home, the state’s official sponsorship of the austere Salafi school of Sunni Islam has created particular problems with the country’s Shia minority on the one hand, and with radical and violent Islamist groups such as Al Qaeda, on the other. At the same time, the tradition-bound, dynastic politics of the Al Saud family poses an obstacle to the sort of reform that would encourage broad-based economic growth and political participation.

Given these domestic political challenges, the events of the 2011 “Arab Spring” raised new Saudi fears about internal unrest and regional strife. Saudi leaders have tended to interpret recent political upheavals in the context of a broader sectarian and strategic competition with Iran. That rivalry for leadership within the Muslim world has driven Saudi defense and foreign policy for decades and shows no serious sign of abating.

Iran’s nuclear ambitions exacerbate Saudi fears, and the latest spate of U.S.-led multilateral negotiations with Tehran has done little to inspire confidence in Riyadh. Like the Israelis and other critics of the process, the Saudis worry that Iran is using talks to slip free from crippling international sanctions in ways that will allow Tehran to expand its regional influence without permanently conceding its nuclear weapons or ballistic-missile ambitions. Unlike the Israelis, the Saudis do not yet have their own nuclear arsenal to deter Iran. But prominent Saudis, such as former intelligence chief Prince Turki Al Faisal, have declared that Riyadh would have no choice but to go nuclear if Iran ever actually crossed that threshold.

Recent U.S. and Saudi differences over the Arab Spring and Iranian nuclear negotiations exist against a larger backdrop: the gradual deterioration in Riyadh’s relationship with Washington. Throughout the Cold War, that relationship was justified by Washington’s commitment to defending the world’s preeminent energy producer from Soviet conquest. In the post–Cold War period, Washington remained concerned about secure access to Gulf energy supplies, but U.S. wars in Iraq ultimately contributed to the deterioration in bilateral ties with Riyadh, even though the Saudis had no love for Saddam Hussein’s Baathist regime. And, of course, the biggest shock to the U.S.-Saudi relationship came on 9/11, given the Saudi origins of fifteen of the nineteen Al Qaeda hijackers.

Looking ahead, there are additional reasons to anticipate that Saudi-U.S. ties will ebb. Above all, whereas U.S. energy imports from Saudi Arabia used to be taken for granted, the U.S.-led technological revolution in hydraulic fracturing, or “fracking,” and improvements in energy efficiencies are turning the United States into a net energy exporter. Energy sales will no longer offer as significant commercial ballast to the U.S.-Saudi bilateral relationship as they once did.

To be sure, Washington and Riyadh will continue to share important interests. On balance, however, the Saudis see the writing on the wall, and they have been smart to seek new ways to adapt to an increasingly difficult strategic environment. Riyadh has begun to diversify its commercial and strategic relationships and consider its security in an Asia-centric, rather than U.S.-centric, context. Evidence of these shifts is already apparent in the Saudi strategy for South Asia.

A New Game with New Delhi

In early 2012, Saudi authorities arrested Sayeed Zabiudeen Ansari (alias Abu Jundal), a Lashkar-e-Taiba (LeT) operative accused of playing a central role in planning and executing the 2008 terror attacks in Mumbai, India. After months of behind-the-scenes diplomatic wrangling between Islamabad, Riyadh, New Delhi, and Washington, Ansari was deported to India, where he was publicly re-arrested and interrogated extensively. Today he sits in solitary confinement in Mumbai’s central jail, and Indian sources claim that he has shed significant light on the Mumbai operation, including its links with members of the Pakistani intelligence service, or ISI.

Riyadh’s decision to send Ansari to India was remarkable. Ansari had traveled to Saudi Arabia on a Pakistani passport and his interrogation was almost certain to implicate the ISI—and by extension, provide strong evidence on the question of the Pakistani state’s support to terrorists. Pakistani officials undoubtedly would have preferred that Ansari be returned to their custody, and in the past, the intimate ties between Saudi and Pakistani intelligence services would have trumped Indian requests. In this case, however, Indian authorities prevailed. It helped, of course, that the facts were in New Delhi’s favor: Ansari was actually an Indian whose DNA matched with that of his Indian father. Pressure from U.S. intelligence officials and growing Saudi concerns about the genuine threat posed by groups like LeT may have sealed the deal.

Yet the Ansari case was also part of a wider trend in the Saudi-Indian relationship dating back to the end of the Cold War. For decades, India’s tilt toward Moscow and anemic economy had hindered the full flowering of ties between New Delhi and Riyadh. The new post–Cold War order paved the way for Riyadh to reimagine India’s potential as a growing energy consumer, a powerful regional actor, and even a strategic partner.

More important, in the early 2000s, Riyadh had good reasons for concern that India was growing closer to Iran. In 2000, India and Iran agreed to invest in a transit corridor linking an expanded Iranian port of Chabahar on the Arabian Sea to Afghanistan and Central Asia. In 2001, Indian Prime Minister Atal Bihari Vajpayee visited Tehran, and in 2003, Iranian president Mohammed Khatami was India’s chief guest for the annual Republic Day celebration. The 2003 “New Delhi Declaration” included pledges by the two sides to expand and deepen commercial links—especially energy trade—and defense cooperation in a “strategic partnership.” Early signs, such as security-oriented working groups and naval exercises, along with a 35 percent jump in bilateral trade between 2004 and 2005, suggested that this Indo-Iranian partnership had the potential to be more than mere rhetoric.

Riyadh, however, did not sit idly by and watch the Indo-Iranian relationship mature. The Saudis had important cards to play, not least their place as India’s top source for petroleum imports. These existing commercial ties were actively encouraged and bolstered by the diplomatic outreach of Saudi leaders. In 2006, King Abdullah visited New Delhi, the first trip to India by a Saudi monarch since 1955. There the two sides vowed to expand trade and to improve counterterror cooperation. In 2010, Prime Minister Manmohan Singh returned the favor with a three-day, high-profile visit to the kingdom, during which the two sides also declared themselves “strategic partners” and paved the way for a follow-on defense cooperation pact inked in February 2014.

From a Saudi perspective, India is clearly an important energy customer, but the heightened strategic value of closer ties with India is better appreciated when viewed through the lens of Riyadh’s rivalry with Tehran. Here Saudi policy analysts suggest that diplomatic outreach to New Delhi has already achieved significant successes. Point by point, the emergent Indo-Iranian partnership of the early 2000s has been matched by Riyadh’s own diplomatic overtures of the past decade.

In addition, the Saudis have continued to supply about a fifth of India’s petroleum imports, even as total Indian energy demand more than doubled from 1990 to 2009. In an era when India has faced mounting international pressure (especially from the United States) to limit the growth of its oil imports from Iran, reliable Saudi supplies provide a crucial alternative. In 2012, for instance, India cut its Iranian crude imports by 11 percent. In 2013, India cut even further, and Iran fell from number three to number seven on the list of India’s top oil suppliers. Without the confidence inspired by unstinting Saudi energy supplies and royal reassurances, India would also have been less likely to take diplomatic action against Iran by casting multiple important votes in the United Nations’ International Atomic Energy Agency (IAEA) during the period from 2005 to 2009.

To be sure, India has hardly turned into an unabashed supporter of the Saudi agenda. New Delhi remains concerned about the role of Saudi support to Salafist groups throughout the region, including in India itself, home to nearly 10 percent of the world’s Muslims. And Riyadh’s long history of intimate links with Pakistan’s security establishment will remain a source of distrust and tension for the foreseeable future. Moreover, New Delhi tries to maintain cordial, better relations with Iran. Tehran and New Delhi still see eye-to-eye on the situation in Afghanistan, and India has assiduously avoided taking sides in the Syrian civil war.