Saudi Arabia: The Choice the United States Has to Make 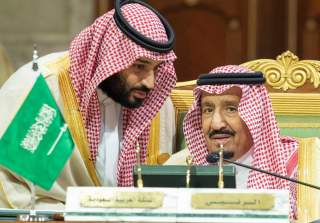 LONG BEFORE “transactional” became a cliché applied to policies of Donald Trump, the term accurately described the U.S.-Saudi relationship. The partnership brought together the world’s most important democracy and a family-run autocracy that was medieval in its mores and allied internally with intolerant religious fundamentalists. Shared values have always been absent, and shared objectives and perspectives have been tenuous.

Oil has lubricated the relationship, of course. Oil was on leaders’ minds when the relationship began—on a U.S. warship anchored in the Great Bitter Lake along the Suez Canal, where Franklin Roosevelt, returning in February 1945 from the Yalta conference, met with Ibn Saud, founder of the Saudi kingdom. Ever since, opposition to some adversary also has underpinned the relationship. With World War II still under way, U.S. military planners were thinking about access to the Arabian Peninsula for moving resources from the Atlantic theater to the Pacific once Nazi Germany was defeated. Later during the Cold War, minimizing Soviet inroads in the Middle East was a major ingredient in American thinking about the relationship with Saudi Arabia. Despite how little the Saudis had in common with the West, aversion to godless communism was an even bigger part of their sentiments.

Despite the divergence in values and the transactional nature of the U.S.-Saudi bargain, however, the emotive as well as the strategic have been part of the relationship from the beginning. Franklin Roosevelt and Ibn Saud hit it off well despite the huge difference in their backgrounds. After the Saudi king, who walked with difficulty because of old wounds to his legs, admired the mobility that Roosevelt’s wheelchair provided, the president bestowed upon him the much-appreciated gift of one of the two wheelchairs he had brought on the trip.

Over the ensuing decades, American sentiment about Saudi Arabia has strayed from hard-nosed strategic calculations in ways that go beyond personal rapport between leaders. The sheer passage of time has ingrained the habit of thinking of Saudi Arabia as a friend and ally, notwithstanding the absence of a mutual security treaty. Shared opposition to hated adversaries, whether they be godless Soviets or too-godly Iranians, has reinforced the habit.

THE TRUMP administration would put opposition to Iran at the top of any list of its strategic rationales for treating Saudi Arabia as an ally. The administration’s fervent stoking of hostility toward Iran has been one of the few consistent themes in a foreign policy otherwise replete with inconsistencies, and it has become a priority in shaping the administration’s policies in the Middle East. Saudi Arabia figures prominently in the hostility-stoking campaign because the kingdom is Iran’s principal rival in the Persian Gulf region. The simple notion that any enemy of my enemy is my friend is overriding sober calculation of how Saudi Arabia’s conduct does or does not support U.S. interests.

The Trump White House also seems to hope that the Saudi regime will lean on the Palestinian leadership to declare surrender in its long contest with Israel and to accept a “peace plan” that leaves Palestinians with something less than a sovereign state worthy of the name. There is some basis for that hope in that the interests of the Palestinians may not rank highly among the personal interests of the de facto Saudi ruler, Crown Prince Mohammed bin Salman (MBS). But the Israeli-Palestinian conflict and the cause of Palestinian self-determination still have resonance among the Palestinians’ Arab brethren in Saudi Arabia. The issue is one of the few on which Saudi king Salman bin Abdulaziz Al Saud, despite his declining faculties, has weighed in and pre-empted his son. Salman has made clear that the official Saudi position is still to support the Arab League peace initiative—promoted by Salman’s predecessor Abdullah—which provides for a two-state solution in which 1967 borders would be the starting point for any territorial settlement.

Israel’s posture toward Saudi Arabia has changed greatly over the years, which is important because of the extraordinary role Israeli governments play in American politics. Israel formerly saw Saudi Arabia as among its arch-enemies in the Arab world. (In his meeting with Roosevelt, Ibn Saud strongly opposed any establishment of a Jewish state in a land already populated by Arabs.) Amid current talk about arms sales to the Saudis, it may be easy to forget that the biggest controversy involving arms to Saudi Arabia was in 1981, when a prospective sale of Airborne Warning and Control System aircraft became part of what was then the largest foreign arms sale in U.S. history. The Israeli government of Menachem Begin vigorously opposed the deal. Congressional approval of the sale required a strong push by the Reagan administration in which President Ronald Reagan declared, “It is not the business of other nations to make American foreign policy.”

Among the changes between then and now, three are especially relevant. First, with the United States extinguishing Saddam Hussein’s regime in Iraq, Iran became far and away Israel’s principal bête noire. And the enemy-of-my-enemy-is-my-friend logic, applied to Saudi Arabia, works in Israel the same way it works elsewhere. Second, in recent years and especially since MBS took charge in Riyadh, informal cooperation on security matters between Israel and Saudi Arabia has increased, despite the absence of formal diplomatic relations. This is highly important to Benjamin Netanyahu’s government not only because of the anti-Iran flavor of the cooperation but even more so because it suggests that resolution of the Palestinian issue is not necessary for Israel to enjoy worthwhile relations with other regional states. The third change is the Trump White House’s effort to coerce the Palestinians into accepting as a final settlement an arrangement that leaves Israel in effective control of the land between the Mediterranean and the Jordan River—an effort that is music to the ears of Netanyahu’s government.

While the Israel dimension shapes the political context for Trump’s policy toward Saudi Arabia, more personal considerations are in play as well. The Saudis have used their special brand of high-priced cajolery with many foreign leaders, but they have an especially receptive target in Donald Trump. Trump covets the kind of glitter and flattery that were in full display during his visit to Riyadh last year. Then there are Trump’s private business dealings, in which, despite his attempts to downplay the connection, Saudis have played a major role. They have been, for example, among the biggest spenders (as part of their lobbying in Washington) at Trump’s hotel on Pennsylvania Avenue.

The personal relationship between MBS and Trump’s son-in-law and advisor Jared Kushner is especially significant. Whereas Ibn Saud and Roosevelt were two elderly and accomplished leaders who shared a difficulty walking, MBS and Kushner are two thirty-somethings who share inexperience, inherited power and the favor of the family patriarch as well as genuine liking of each other. Kushner reportedly was the key influence in Trump’s highly unusual decision to make Saudi Arabia his first stop in a foreign trip as president. Kushner does not seem to be on the verge of losing presidential favor, and his own status is a form of insurance for MBS insofar as U.S. policy might affect the crown prince’s position.

THE MURDER in the Saudi consulate in Istanbul of Saudi journalist and regime critic Jamal Khashoggi has seriously complicated plans and intentions in both Riyadh and Washington. The murder was shocking enough by itself. It also caused many observers to look closely at hitherto mostly overlooked aspects of the regime’s behavior and to see that the Khashoggi affair, although especially egregious, was part of a pattern of excesses. These have included intolerance of dissent and harsh repression of dissenters. Externally, the behavior has included destructive recklessness such as MBS’ war in Yemen. The crown prince’s carefully promoted—and frequently echoed in the United States—image as a modernizing reformer has been badly broken. As the shards of the image fall away, people see an autocrat who places no limits on his drive for absolute power.

The operation against Khashoggi also showed how much the regime thought it could get away with. Years of U.S. policies have conditioned it to believe it can get away with a lot. Responses to trouble that Saudi Arabia has caused for the United States—most notably the cultivation of Wahhabi extremism that was reflected in, among other things, fifteen of the nineteen hijackers in the 9/11 terrorist attacks being Saudis—have repeatedly been tempered by a desire to keep the U.S.-Saudi relationship on an even keel. Reportedly MBS was surprised by the magnitude of the uproar over what happened to Khashoggi. It is not surprising that MBS was surprised.

Despite the uproar, Saudi leaders probably still believe they can get away with a lot. Riyadh’s multiple, shifting, implausible and mutually inconsistent explanations for what happened to Khashoggi are intended less to fool people than to go through the motions of accountability while shielding the crown prince from blame. The regime gets comfort from how the Trump administration appears to be going along with this strategy, beginning with the president’s suggestions that this may have been a “rogue” operation. If the administration were to begin to waver, Saudi Arabia could use its lobbying capability to steer politics and opinion in the desired direction. Twenty-eight public relations firms are registered under U.S. law as representing Saudi interests, and numerous financial ties to American think tanks and industry further magnify Saudi influence in Washington. The Saudi regime also has the support of the more formidable Israel lobby, which on this issue is functioning as a pro-Saudi lobby.