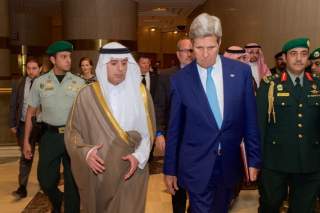 Russia’s decision to plunge forward with airstrikes in Syria despite U.S. warnings presents Washington with uncomfortable choices. If Russian strikes succeed in degrading the Syrian opposition, regional actors will increasingly look to Moscow as an influential power broker, crippling our efforts to isolate Russia for its actions in Ukraine and beyond. If Russian operations bog down and Assad’s regime falters, ISIS or other violent extremists will fill the vacuum of power in Syria.

Escaping from this conundrum is still possible, however. Immediate engagement to advance a compromise political settlement in Syria is our best option for stemming the flow of refugees and regaining a U.S. leadership role. And the keys to such a settlement may be in Saudi Arabia.

Moscow is applying a simple dichotomy in choosing its military targets: groups that support the Assad regime and Syria’s existing state institutions, and those that oppose them. In Moscow’s eyes, any who oppose Assad’s government are de facto allies of ISIS and other violent extremists, whether or not they share the extremists’ goals. Moscow’s approach does not stem from failure to appreciate the diversity within Syria’s complex societal and sectarian landscape, but from its belief that Assad’s fall from power would empower Syria’s most determined and most ruthless forces, ISIS or the al Qaeda-affiliated al Nusra front. The growth of violent extremists in Libya following Qaddafi’s overthrow looms large in Russian reasoning.

Russia’s “us or them” approach forces difficult decisions on states that have supported Syrian opposition groups. The U.S. has tried both to remove Assad and combat ISIS. Our efforts to walk this line by supporting moderate opposition groups have failed. Russian strikes make this approach even less viable and more dangerous. Turkey’s balancing act has required other contortions. President Recip Erdogan has sought simultaneously to overthrow Assad, defeat ISIS, and suppress Kurdish groups. Russia’s intervention leaves Turkish in tatters.

Saudi Arabia faces the most difficult and most important choices. Relations between Riyadh and Moscow have never been close. But last summer, the two governments took tentative steps toward improvement when the Saudi Deputy Crown Prince made a surprise visit to Moscow, signed agreements on economic cooperation, and invited Putin to visit Riyadh. The Saudis perhaps intended to encourage Russia to moderate its support for Assad while signaling their displeasure with the U.S. over the looming nuclear deal with Iran. For its part, Moscow welcomed the visit as a breach in the wall of isolation the U.S. has attempted to erect around Russia. It saw also an opportunity to test Saudi willingness to strike a negotiated settlement over Syria.

Any hope in Riyadh that improved relations would lessen Russian support for Assad is now gone. Nor does the Saudis’ traditional reliance on the U.S. to keep their regional opponents in check look promising. Does Saudi Arabia double down on its support for Syrian opposition forces or seek a compromise? Increasing support for the opposition risks military confrontation with Russia and empowering violent extremists who might threaten the Saudi royal family. Yet negotiating a deal with Moscow would boost Russian regional influence at a time of great uncertainty. That could yield unpredictable consequences for Saudi interests.

The Saudi dilemma presents the U.S. with diplomatic opportunity. ISIS and other extremists in Syria will never accept a settlement. Defeating them is our only option. But some Sunni oppositionists could be persuaded to compromise, and the Saudis have the ability both to punish (by withholding support) and reward (by providing money) those elements to encourage a deal. Working quickly with Riyadh to craft the outlines of a compromise settlement in Syria could shift the diplomatic spotlight from Moscow to Washington while reassuring Riyadh that the U.S. is still the region’s dominant outside power. Of course Russia will also have to facilitate any deal with Assad, but it’s in our interest that the U.S. have a lead role in advancing a settlement.

Seizing this opportunity will require that we accept the reality that Russia’s intervention in Syria has sharply limited our policy choices. We can no longer realistically aspire both to force Assad from power and to prevent the ascent of ISIS or other violent extremists in Syria. Accepting some form of continued Alawite rule in Syria is the price we must pay for eliminating the more pressing threat of ISIS. And we cannot achieve our goals in either the Middle East or Europe without taking Russian interests into account.

Time is not our ally under the circumstances. Failure to act now risks ceding the diplomatic initiative to Russia or allowing events on the ground to spin out of control. The U.S. has few good options, but merely hoping that Putin’s gambit fails is the worst.

James P. Farwell is a national security expert who has advised the U.S. SPECIAL OPERATIONS COMMAND. He is the author of Persuasion & Power(Washington: Georgetown University Press, 2012). George Beebe is a former chief of CIA’s Russia analysis who served on Vice President Cheney’s staff from 2002-2004. The views expressed are those of the individuals and do not represent those of the U.S. Government, its departments, agencies or COCOM.