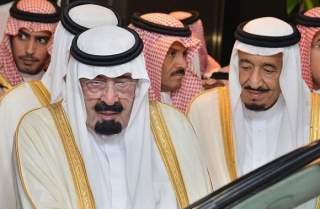 The death of Saudi Arabia’s King Abdullah, though not unexpected, caused a spike in oil prices, and a frenzied interest in the succession process and the future rulers of Saudi Arabia, owing much to the state’s outsized role in global markets and Middle Eastern affairs. The succession was in fact painless. But the process highlights the archaic nature of the Saudi regime, and should prompt us to think more closely about why the United States still regards Saudi Arabia as one of its closest allies, despite the nation’s objectionable domestic politics and its foreign meddling.

The succession itself was smooth, elevating Crown Prince Salman to King, and Deputy Crown Prince Muqrin to replace him. Though Salman’s health has been regularly questioned by western commentators – it has even been suggested that he has Alzheimer’s or dementia – he seemed relatively healthy in his first broadcast to the nation. Regardless, he is 79, and the appointment of his half-brother Muqrin, who is ten years younger, as Crown Prince, was key for longer term stability.

The succession will bring no major policy changes, a fact Salman was at pains to point out in his first television address. This is also unsurprising: although Saudi Arabia is nominally an absolute monarchy, in fact most decisions are made by a consensus among a number of senior princes. As King Abdullah’s health worsened in recent months, Salman appears to have been increasingly involved in policy decisions. Saudi policies on a number of key issues, including Syria, Iran and OPEC production levels, are therefore likely to remain entirely unchanged.

The most interesting development is the appointment of Muhammed bin Nayef to deputy Crown Prince, the first third-generation Saudi prince to be placed in the direct line of succession. As the date when the crown will pass to the third generation approaches, internal family politics play an increasing role:  Muhammed is Salman’s full-blood nephew, son of his brother Nayef. Salman and Nayef were members of the Sudairi Seven, the largest group of full brothers born to King Abdulaziz. As such, while they all lived, they formed a powerful bloc within the ruling family. The appointment by Salman of his nephew within the line of succession is likely not due only to Muhammed’s experience as head of the powerful Interior Ministry, but also to a desire to keep the crown within the Sudairi branch of the family. It remains to be seen whether Muhammed’s appointment would be maintained by new Crown Prince Muqrin should he ascend to the throne.

Though all these facts are important, they obscure the fact that the succession system itself is completely archaic. Even the recently created Allegiance Council, designed to codify the transfer of power, is merely a more formalized family conference to choose the next heir. In the 21st century, Saudi Arabia is still governed in a way more reminiscent of medieval Europe than any modern state. King Abdullah was lauded as a reformer, but change has been at best incremental: the recent flogging of blogger Raif Badawi illustrates the Saudi state’s stance on freedom of speech, while Saudi women are still neither permitted to drive nor to perform a variety of basic tasks without permission from a male “guardian.”

It is true that good foreign policy often requires working with allies which have domestic politics that are distasteful, and U.S. leaders’ tributes to King Abdullah tended to highlight his role as a U.S. ally in the Middle East. Secretary of State John Kerry described him as a “man of vision and wisdom,” and the White House statement noted that “the closeness and strength of the partnership between our two countries is part of King Abdullah’s legacy.”

Yet these tributes ignore not only unsavory Saudi domestic politics, but also the many destabilizing actions the country has taken in recent years. Saudi Arabia was the key player in efforts to roll back the protests of the Arab Spring, including military intervention in Bahrain. The Saudis were also instrumental in the early growth of the Syrian civil war, funding and arming anti-regime rebels, often with little attention to where such arms ended up. Today, Saudi leaders are vehemently opposed to a U.S. nuclear deal with Iran, as the long-running Saudi rivalry with Iran would not be well-served by a ratcheting down of tensions. Even the current instability in Yemen is partly due to Saudi meddling in Yemeni tribal politics.

Ultimately, the succession will not alter Saudi foreign policy or the Saudi stance on other major issues like the price of oil. If there is a succession crisis, it is many years away, and the royal family remains firmly ensconced in power. However, the transfer of power can perhaps serve to highlight our often reflexive support for the Saudi government. The system by which a new king is chosen may seem outdated, but it is just one facet of Saudi Arabia’s distasteful domestic politics. Rather than simply welcoming a new monarch, it might be good for U.S. leaders to look more closely at our relationship with Saudi Arabia and their recent foreign policy actions. It’s time to ask whether we should really continue to describe such a regime as one of our closest allies.

Image: Flickr/Tribes of the World