Saudi Arabia Wants to Fight Iran to the Last American 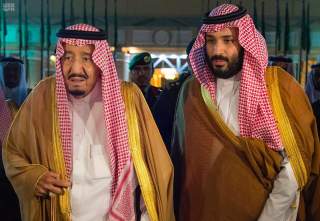 Many observers have connected the dots and concluded that Saudi Arabia’s crown prince is seeking to drag the United States into a war with Iran and Hezbollah. But that’s only half the story. Looking at the recent events through a broader geopolitical lens, a much more sinister plan emerges: a Saudi plan to trap the United States in a permanent standoff with Tehran.

While most of the world has been aghast by Crown Prince Mohammad bin Salman’s radical actions of this past week, his conduct is only inexplicable when viewed from the wrong lens, such as the Sunni-Shia sectarian frame or the even more absurd attempt to cast this conflict as part of a greater fight against terrorism. After all, Saudi Arabia provided the seed money for Al Qaeda and openly funded and armed Al Qaeda in Syria (Jabhat al-Nusra), according to the U.S. government.

When seen from a geopolitical lens, however, the unlikely alliance between Zionist Israel and the Wahhabi House of Saud, their opposition to the Iran nuclear deal and their coordinated effort to ratchet up tensions in the region suddenly acquire a degree of logic.

Rather than ethnic or sectarian motivations, Saudi Arabia’s ultimate aim is to drag the United States back into the Middle East in order for Washington to reestablish its military dominance and reimpose on the region an equilibrium that favors Tel Aviv and Riyadh. This, however, does not require just a war in Lebanon, but a permanent state of conflict between the United States and Iran.

Israel and Saudi Arabia see this as justified return to the order that existed prior to the U.S. invasion of Iraq. The “dual containment” policy of the Clinton administration established a balance in the region centered on Israel, Saudi and Egypt, with the explicit goal of isolating and containing both Iran and Iraq. Tehran vehemently opposed the order and sought to undermine it by all means, including by targeting the Israeli-Palestinian peace process.

But despite Tehran’s extensive efforts, Iran failed to bring about the collapse of the U.S.-led order. Instead, it was the United States itself under George W. Bush that—inadvertently—brought about the end of the U.S.-backed balance by committing the disastrous mistake of invading Iraq. The spectacular failure of this endeavor destabilized the region and weakened the United States, to a point where it no longer could restore the old order or foist a new balance upon the region.

The Middle East has ever since essentially been orderless—there is no single dominant power or combination of states that can establish and sustain a new balance. This is precisely why it is experiencing so much instability and violence: the absence of a clear order draws all major powers into a fierce competition to define the new equilibrium. This is also why Israel and Saudi Arabia have found common cause against Iran and why they have been pushing the United States to take military action against Iran.

Israel and Saudi Arabia were the biggest losers of the Iraq war and the collapse of Pax Americana. They enjoyed maximum security and maneuverability under the previous order, and their regional rivals were checked and contained, courtesy of American treasure and blood. Their priority for the last decade has been to compel the United States to recommit itself to the region and restore the pre-2003 balance, or at a minimum re-embrace the role as hegemon over the Middle East.

But while the United States saw benefit in Middle Eastern hegemony twenty years ago, American, Israeli and Saudi interests have sharply diverged over the past two decades. Not only does the United States lack the resources to resurrect the previous balance, the benefits to U.S. national security are increasingly in question. President Barack Obama had ordered a global audit of America’s resources, commitments, challenges and opportunities early on in his presidency. The conclusion was unmistakable: the most strategically vital area for the United States in this century is East Asia. Yet, most of America’s resources were committed to the Middle East in unending wars of increasingly marginal strategic significance. America needed a course correction that reversed its overcommitment in the Middle East and undercommitment in East Asia: a pivot to Asia.

Both Tel Aviv and Riyadh viewed Washington’s reorientation towards Asia with concern. They feared it would weaken Washington’s commitment to their security while also potentially making the United States more inclined to reach an accommodation with Iran. Those fears rose dramatically as Obama resisted the Saudi and Israeli push to bomb Iran, and instead opted for diplomacy. To the Saudis, Obama had sided with Iran. The details of the nuclear deal were irrelevant to Riyadh: the problem was the very idea of the United States striking a deal with Iran, which by definition would signal the end of Washington’s policy of fully balancing Iran and leave Saudi facing its Persian rival without unreserved American backing.

Saudi Arabia’s only prospect of balancing Iran today remains the same as it was ten years ago: by dragging the United States back into the region militarily. If Iran’s nuclear program or its role in Iraq won’t compel Washington to bomb Iran, the Saudis must instigate a crisis that will force America back into the squabbles of the Middle East. Lebanon can serve this purpose precisely because it brings in a critical factor absent in both Iraq and Yemen—the Israeli angle and its American political potency. What the American public needs to fully understand, though, is that Riyadh is not seeking a one-off in Lebanon but rather a perpetual U.S. confrontation with Iran, a never ending war on behalf of Saudi Arabia.

As Secretary of Defense Robert Gates said in 2010, the Saudis “want to fight the Iranians to the last American.” Why the Saudis would see this as attractive is clear. Why Netanyahu would like to go along with this also follows a certain logic. That is not the mystery in this drama. The mystery is why the president of the United States would go along with something that so clearly contradicts U.S. national interest.

It is not the Saudi crown prince that is acting irrationally. It’s the president of the United States.

Trita Parsi is author of Losing an Enemy—Obama, Iran and the Triumph of Diplomacy. He is the president of the National Iranian American Council.