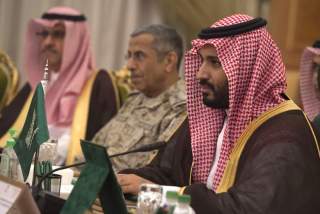 Speaking at the December 2013 meeting of the Organization of the Petroleum Exporting Countries, then Saudi oil minister Ali al-Naimi warned of repercussions from a pledge by Iran—hit the year before by harsh U.S. and European sanctions—to return to producing four million barrels of crude a day, “even if the oil price reaches twenty dollars per barrel.” Naimi predicted this basement-level value would wipe out producers of then burgeoning “nonconventional” petroleum such as shale and oil sands.

Despite its best market-crashing intentions three years ago, Iran had to wait until it gained the relief of last year’s nuclear deal to begin realistically pursuing its previous output. In the interim, the Saudis have proven themselves far more adept at affecting low prices through OPEC, responding to rising production from those primarily North American nonconventional producers by merely adding to the glut, in an attempt to bankrupt these higher cost rivals. In February of this year, Naimi even spoke of twenty dollars a barrel as a distinct possibility, and without concern that it might also take out more than a few fellow OPEC members.

Such historical context is necessary when dealing with a regime as opaque but also clearly self-interested as that in Riyadh. At the most recent OPEC gathering, in Vienna last week, its new oil minister Khalid al-Falih attempted to reclaim the role of conciliator, suggesting that the Saudis now “realize that a long time under lower prices doesn’t bring enough supply to meet the rise in demand.” This came as the cartel again refused to cut production and thus exerted a small amount of downward pressure on prices. These had recently rebounded to about fifty dollars per barrel, owing to factors outside Saudi control, such as Canadian wildfires and Nigerian instability.

The price stabilization may have precluded a true test of the Saudis’ future strategy, though there is ultimately little reason to believe that maintenance of high supply has been abandoned; it has merely been recalibrated to make the Kingdom a price taker rather than maker. Despite seeming to soften the message of Prince Mohammed bin Salman last week, Falih’s actions at OPEC will continue to be directed by the upstart Saudi leader, whose ambitious post-oil Vision 2030 strategy ensures the Saudis retain considerable interest in maximizing oil returns in a short space of time, with the fate of other producers, or the market itself, of little concern. This make-or-break gamble will necessarily have immense repercussions beyond those already felt. It certainly puts an end to any notions of an imminent Western uncoupling from Middle Eastern–dictated oil politics.

The End of OPEC, and Beyond

The OPEC triumphalism on display in Vienna was in stark contrast to the mood at the cartel’s April meeting in Doha. At that event, Riyadh refused to move forward on a production freeze at January 2016 levels, as had been agreed beforehand with Russia. This was due to the deal’s exclusion of Iran, which had again invoked its desire to reach pre-sanctions targets, albeit with a higher likelihood of success this time. After this episode, a common observation was that the Saudis had hastened the death of OPEC. That assessment likely remains accurate, and was certainly the view of Russian executive Igor Sechin, an adviser to Vladimir Putin, who said that the group has “practically stopped existing as a united organization.”

Suzanne Maloney, deputy director of foreign policy at the Brookings Institution, called the Doha affair a “botched Saudi bid to stem the precipitous decline in oil prices.” Oil industry watchers I spoke to saw it quite differently. They said the Saudis were never that interested in curbing production to begin with, least of all Prince Mohammed bin Salman. In the most appropriately Machiavellian reading, this prince was fairly certain of how Iran would respond to the offer on the table, and used the affair to reassert authority on the market. It probably didn’t hurt that Riyadh could paint its great rival as the villain, while advancing its own agenda.

This most recent death-of-OPEC narrative is thus a firm reversal of the one that became popular in prior years: that the organization’s demise would represent an effective neutering of Saudi influence as rising nonconventional production from the United States, Canada and elsewhere diminished the importance of the Middle East (not to mention non-OPEC Russia). To the most utopian observers, such a turn of events would herald the end of the outsized global role of the region and the Western foreign policy of alternatively coddling and killing off its typically authoritative regimes.

There have certainly been signs that considerations around Middle Eastern oil—and all that it buys and influences—have already changed following recent market fluctuations. The Iran nuclear deal, for one, came against stern Saudi objections, as did recent U.S. congressional approval for families of September 11 victims to sue Riyadh for its complicity in those attacks. There has also been noticeably greater level of scrutiny of weapons shipments to the Saudis from North America and Europe in recent months.

The recent centenary of the Sykes-Picot agreement between Britain and France occasioned similar notes of optimism: in arguing that it was more fulfillment of Western designs on Middle Eastern petroleum than arbitrary post-Ottoman demarcation, University of Illinois scholar Rachel Havrelock imagined a future in which challenges to local geopolitical realities could “yield greater regional stability and prosperity,” through more localized ownerships of oil reserves.

To some, this sort of breakdown of twentieth-century Middle Eastern power structures—which had become as uncomfortable for the West as for the region’s peoples—is evident in the Saudis’ own diminished ability to maintain domestic political legitimacy under reduced oil revenues. The kingdom ran a significant budget deficit of $98 billion in 2015, leading the International Monetary Fund to warn that it could run out of money within five years. Even with an estimated $630 billion in cash reserves and minimal debt, it has had to curb its populist spending and subsidization programs. This was despite these efforts taking on an added air of importance after the Arab Spring protests and rise of jihadist movements such as Islamic State, which revealed legitimate threats to its rule in the past few years.

Coming at the same time, however, has been the battering of American dreams of greater energy self-sufficiency, and of supplanting Middle Eastern supply in the export market. The low oil price has also exacted a heavy toll on conventional oil producers elsewhere that lack both the economic diversity and the rainy-day funds found in the West and, in some combination, in the Middle East. This has created new foreign-policy headaches in areas that seemed to be inching towards a degree of stability—Nigeria, for example—or might have been next on President Obama’s list of rapprochement candidates—Venezuela, perhaps.

And all of this is to say nothing of the likely Saudi impact on efforts to fight runaway climate change, which should necessarily dominate such discussions, but often don’t, most likely owing to the realistic expectations of international policymakers in this sphere. As a New America paper out last month reiterates, “wild fluctuations wreak havoc on energy and transportation markets.” Even if consistently and predictably depressed, oil prices offer little incentive for moving away from fossil fuels. Given the accelerated pace of global temperature rises, this likely presents an effective international carbon tax regime—a commitment far and above that agreed in Paris last year—as the only viable effective curb on the worst effects of warming to come.

While the Saudis, long a thorn in the side of efforts to forge international consensus on climate action. appear to have seen the writing on the wall in terms of the growing challenge of renewables and lower carbon natural gas, their chosen strategy seems to be a decidedly climate-unfriendly one of squeezing every drop from their historical abundance, rather than “keeping it in the ground,” as the popular mantra goes. Within this, their contentment with being price takers will likely only feed the unhelpful volatility.

Roger Diwan, managing director of financial services at the consultancy IHS, told me that Riyadh, with its ability to produce more quickly and cheaply than virtually all of its competitors, now had a firm goal of grabbing ever larger portions of the growth in international demand for oil, and letting the rest of the world fight it out for what remains. Within this, there is also an impetus to produce as quickly as possible: “Until last year, we were talking about the next two generations having oil and to make sure that in fifty years we’re still producing oil,” Diwan said. “Now the next generation has taken over and said, ‘we want to produce it now.’”

Riyadh is indeed talking about some very short timeframes for what might be considered a new conception of “peak oil.” Though its bold strategy looks to 2030, Prince Mohammed has set 2020 as the date for ending Saudi dependence on petroleum revenue to balance its budgets. This is remarkable, considering that this resource currently accounts for 80–90 percent of state income and has created a culture of legendary inefficiency over many years of paternalistic largesse. The key to making the change is expected to be the partial sell-off of state-owned oil colossus Aramco and its transition into a sovereign wealth fund that will power a diverse range of investments. In line with the sense of urgency, IHS predicts Saudi Arabia will soon raise production to a historic 12.5 million barrels of oil a day, a rate that could eventually rise to 15 million per day.