Saudi Arabia’s New “With Us or Against Us” Attitude 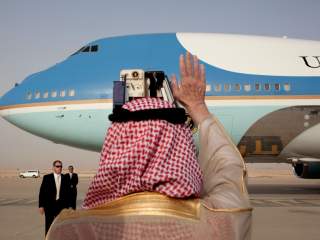 This January King Salman will mark a year as leader of Saudi Arabia. As the new cabinet in Riyadh adjusts to the personal proclivities and vision of King Salman for the year ahead, it will face pressures to maintain its unity and support for a new set of policies for the Kingdom, even as realities evolve on the ground. As this last year has shown, King Salman is taking a more robust approach to regional defense and security. While it may be better to be feared than to be loved, rising challenges from regional actors in neighboring states will continue to test the limits of Saudi capabilities and put pressure on the government in Riyadh to hold rank.

A Difficult Legacy to Inherit

The last decade has witnessed unpredictable political changes in the region that have generated policy challenges and constraints for Saudi Arabia as it underwent its transition from King Abdullah to King Salman. Structural and administrative changes in the new Saudi government point to an imperative for engaging a younger generation in policy formation and replacing figures from the previous administration. Any analysis of Saudi threat perceptions and policy responses traditionally suffers from a lack of accurate information about senior policy-maker views and intentions. However, we can make some tentative conclusions at this point:

1. There are different perspectives on foreign policy within Saudi official circles, particularly among some members of the previous administration who were excluded from the new government, which could create tensions and distractions.

2. Riyadh is reaching beyond its traditional tools of diplomacy to explore more kinetic approaches to defense and security, seeking hardline solutions to the crises in Yemen, Syria and Iraq.

3. Saudi regional policies are attempting to compensate for a perceived loss of influence following the overthrow of Egyptian President Mubarak, the weakness of the Syrian National Council, and unilateral efforts by the United States to reconcile with Iran.

4. Saudi Arabia is trying to balance its desire for regional influence with its role among the GCC states, attempting to placate countries with independent foreign policies like Oman and Qatar, while demanding GCC support for Saudi positions on issues that are essential for Saudi security.

With so many overlapping and complex crises, the cabinet is under significant time and energy pressures, and we have seen the government issuing directives and diplomatic overtures in all directions. Therefore, we should not necessarily interpret every message emanating from Riyadh as a definitive statement of the King’s vision, but rather collective attempts to develop pragmatic solutions for a complicated set of variables.

Sending a Message to the World

King Salman and his advisors began sending new signals to regional partners from his first day in office, indicating their desire for a less confrontational stance on the Muslim Brotherhood and the need for a more united approach to foreign affairs among the GCC states. They have used the media to far greater effect in more sophisticated and savvy ways that appeal to the public, and they have put their diplomats to far greater use than past Saudi governments.

While Riyadh’s agility and innovation can be applauded, it must also be acknowledged that these new methods stem from a source of deep frustration. Riyadh views previous Saudi government efforts to engage the international community as a failure. While previous Saudi officials soft-pedaled the Kingdom’s role in regional defense and security, implemented reforms and supported Western allies, they received little but criticism and scorn in the Western media. The new government’s alternative is to stop placating Western allies and get on with the work of pursuing Saudi national interests by any means necessary. This is a realistic approach. But it has also caught Washington off-guard—and the United States will continue to be blind-sided until it comes to terms with the core problem: a new generation of policy-makers in Riyadh are not satisfied with the status quo and they are demanding attention.

There are religious overtones to this more aggressive foreign policy stance—something along the lines of a militant Salafism. Saudi Arabia, it is believed, does not have to be ashamed of its long-held views on religion and faith, or its long-standing competition with Iran for influence in the region—or the idea that U.S. outreach to Iran creates an imbalance in the region that Saudi Arabia can legitimately seek to redress. Riyadh never was under an obligation to wait for Washington’s approval, and Saudi officials have to some extent dropped the pretense of close consultations. The striking thing is how even Saudi Arabia and its GCC allies have not fully adjusted to the new realities yet either. Both Washington and Arab Gulf capitals are feeling their way through this new reality in fits and starts, testing the waters with each new challenge. Faced with the need to defend the legitimacy of the Yemeni government, or bolster the strength of the Syrian opposition, or send a signal to Iran that its malign activities in the region will not be tolerated, Riyadh and its allies are designing their own policy first and managing blowback from Washington on the fly.

Leadership and its Consequences

Saudi Arabia wants to claim leadership both in the Islamic world and the Arab world. It is about defending the interests of Sunnis everywhere just as much as it is about being the standard-bearer for Arabs under threat from Iran. The two are not mutually exclusive. In places where sectarian and ethnic lines are not neatly drawn, adjustments and compromises can be made. In many ways, Riyadh’s approach is intended to counter the propaganda from jihadist groups that claim their own form of leadership in the Arab and Muslim worlds.

However, more confrontation is highly likely. The West, Iran, the Houthis and other regional and international actors are terrified of Salafism and they will probably increasingly view Saudi aggression through a sectarian lens. This is only partly a reflection of Washington’s prejudices; it is more a reflection of Washington’s self-conscious inability to keep pace with evolving Saudi policy. And Saudi policy is only partly derived from a desire to advocate for Saudi religious views; it is more a defensive reaction to perceived exclusion and abandonment. But both sides fail to understand and appreciate the fears of the other. Yet viewed in this light, it may be easier to appreciate the shifting Saudi stance on the Muslim Brotherhood—Riyadh may not approve of the Brotherhood, but it wants to find a way to coexist with the Brotherhood.

By leaving all policy options on the table, pursuing multiple strategies simultaneously, providing refuge and playing the role of mediator in Arab disputes (albeit mainly Sunni ones), the King will be able to strengthen the Kingdom’s leadership role in the region and in the world. Any foreign country that wants to have influence in the region will have to knock on the door in Riyadh and not try to sneak in through the windows. The rest of the Arab Gulf states will learn how to live with this. Western governments should too.

The “War” Against Terror

The fight against the Islamic State of Iraq and Syria (ISIS, or Da’esh) is helping to create an environment that empowers Riyadh, even as it pursues other initiatives in the region. An American-backed coalition is fighting alongside Iran in trying to defeat terrorists who have taken over large swathes of territory in Iraq and Syria, but it is Sunni populations in those countries that stand in the line of fire. Moreover, Da’esh has skillfully exploited the media to show how Sunni populations in Iraq have been oppressed by an American-backed regime in Baghdad. This media outreach to Sunni Arab audiences puts pressure on Arab governments to defend Sunnis, even Salafists who may not be in the mainstream in the region. It does not help that there is a common Arab perception that long-term U.S. interests lie with Israel and Iran. America is pursuing its war against terror, but given the spread of Da’esh and Washington’s lack of direction, a hardline military approach by Saudi Arabia in other parts of the region increasingly appears more rational and credible in Arab eyes.

With Us or Against Us

The Kingdom’s new era seems to be predominantly one of both inward conservatism and outward activism, characterized by a maximal utilization of resources, even for short-term gains. This is creating an atmosphere in Riyadh that you are either with us or against us. The rules of the game for future promotion and success are being rewritten and those who hope to be seen need to be seen supporting these policies. It will have a polarizing effect in Riyadh, as a new wave of rising stars seek attention and a rival class of elites who held sway in former years lose their place in the prevailing order.

Moreover, even as Saudi Arabia is exploring the full potential of its role in the region, it has not yet devised a clear strategy for practically resolving the many regional crises. If the Kingdom is to extend a hand into influencing the outcome of the fighting in Yemen, Syria and Iraq, then it must realize that the international community will look to Saudi Arabia to contribute solutions for ending those same conflicts. It is in the arena of defense and security that Riyadh will assert its leadership, but it is in the field of negotiations and diplomacy that Riyadh must consolidate its authority. In the absence of such peacemaking, Riyadh is ceding ground to other Arab and international actors, including its own GCC neighbors Oman, Qatar and Kuwait. In order to maintain the close coordination and support of its GCC allies, Saudi Arabia needs to present a forward-thinking vision for peace and long-term stability that accommodates their foreign policy priorities.