Saudi Arabia's War in Yemen Has Been a Disaster 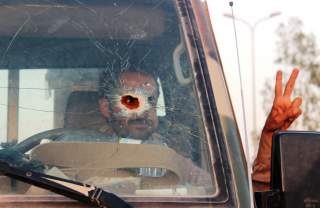 This month marks three years since the start of the Saudi-led campaign in Yemen, but that is unlikely to be an occasion for celebration in Riyadh. The war is estimated to have cost the Saudis upwards of $100 billion, eroded the international image of the kingdom and failed to achieve its objectives of “eliminating Iranian influence” from Yemen. At the same time, the people of Yemen have suffered immensely from the U.S.-backed Saudi campaign, which killed thousands of Yemeni civilians, destroyed the country’s infrastructure, and has led to widespread disease and hunger. With Crown Prince Mohammed bin Salman's (MbS) visit to Washington, the U.S. administration has an opportunity to bring this harmful campaign to an end.

For the Saudis, Yemen is a historical target of influence, but also a critical arena for security and stability, if only because Yemen shares a long and porous border with it and also commands the entrance to the Red Sea. For Iran, on the other hand, Yemen is a secondary arena, certainly when compared to Iraq and Syria. However, for a relatively low investment in the Houthi militia, Iran was able to exact a significant economic, military, and diplomatic price from its main regional rival.

In its campaign against the Houthis, Saudi Arabia enjoys intelligence and logistical aid from the Americans, and has the fourth largest security budget in the world as well as advanced weaponry at its disposal. Yet, the kingdom is finding it difficult to defeat a determined enemy on its doorstep. In fact, in addition to holding on to the Yemeni capital Sanaa and other key areas, the Houthis have fired over one hundred missiles—allegedly manufactured in Iran—deep into Saudi territory and have captured over one hundred square miles within the kingdom.

The gap between the investment in security and military performance led the Saudi king Salman and his heir, Crown Prince Mohammed, to replace the top level of the security establishment, including the chief of staff, the commander of the ground forces and the commander of air defense. These replacements were presented as part of a modernization process, but actually reflect growing frustration in the Saudi elite with the army's performance. It is too early to say whether these personnel changes will also bring about essential changes in strategy, and what effect, if any, they will have on the continued fighting.

Notwithstanding its image of (comparative) success, Iran is also encountering difficulty in operating in Yemen. The maritime blockade imposed by Arab countries—with Western aid—is restricting Iran’s ability to dictate events on the ground and demonstrating the limits of its power. Since Teheran is unable to break the blockade, it has no choice but to smuggle much smaller quantities of "advisors," money, and various kinds of weapons, including missile parts, to the Houthis.

At the same time, the war in Yemen exposed the tenuous nature of Saudi Arabia’s relationships with its principal Muslim allies. The most important of them, Pakistan, surprisingly refused to send its army to assist the kingdom. The Sisi government in Egypt—in which Riyadh had invested many billions of dollars and which was considered the kingdom’s “strategic depth”—also reportedly refused to send large numbers of ground troops to participate in the fighting. Instead, Cairo sent a small contingent of several hundred soldiers and three to four ships to assist Riyadh. And in some instances, even those countries that agreed to participate in the Saudi-led campaign developed conflicts of interest with Riyadh over the course of the fighting; for example, the Saudis and the Emiratis are backing forces that are at odds over the future of Yemen and this created friction that has at times erupted into violence between local actors.

Washington should see President Trump’s close relationship with Crown Prince MbS and the Saudi royal’s visit to Washington as an opportunity to end this disastrous war: The Saudi-led coalition cannot win this war but it can settle the conflict on favorable terms, and the U.S. should help it do just that.

In exchange for increased U.S. support for the Saudi campaign for a limited period, President Trump should demand that the Saudis take further precautions to prevent civilian casualties and increase the aid provided to Yemeni civilians at risk of disease or hunger. Knowing that U.S. support will be withdrawn should incentivize the Saudis to reach a political solution as soon as possible, while dealing a blow to the Houthis and the momentum that U.S. support provides (and keeping the “deadline” secret) will place pressure on the Iranian-backed group to end a war that's tides appear to be turning. With both sides incentivized to end the war, it seems possible that some sort of political agreement can be reached.

The war in Yemen has been a disaster for all involved parties, and so ending it is both the smart thing to do as well as the right thing to do. And because Iranian interference is most successful in regions that suffer from conflict or insecurity, ending the war has the added benefit of potentially weakening the Islamic Republic’s ability to meddle in regional affairs.

Dr. Yoel Guzansky is a Research Fellow specializing in Gulf politics at the Institute for National Security Studies (INSS) in Israel. Ari Heistein is the Special Assistant to the Director of the INSS.