The Saudi War of Necessity in Yemen 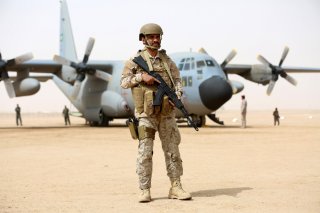 When it comes to national security, there should be no compromise. Therefore, Saudi Arabia’s stance on protecting Yemen’s sovereignty remains unequivocal. A cursory glance at the map immediately reveals Yemen’s relevance to Saudi Arabia. Yemen has always been and will remain a strategically critical neighbor of Saudi Arabia and therefore is a key element in Saudi Arabia’s security framework, which cannot be separated from the Saudi strategic planning.

Saudi Arabia’s historical relations with Yemen have fluctuated between stability and tension, primarily due to the machinations of the Houthi militia in Yemen. The Jeddah Treaty signed on June 12, 2000, resolved the border disputes between the Kingdom of Saudi Arabia and the Republic of Yemen and reiterated the two parties’ commitment to the Taif Treaty, which defined the borders between the two countries.

Economically, Yemen’s lack of natural resources had led the country to be heavily dependent on Saudi support, while Saudi Arabia depended to some extent on Yemeni labor. Therefore, the two countries had established a mutually beneficial relationship. Saudi Arabia has implemented several infrastructure projects inside Yemen to maintain good relations with its neighbor. As a result, more than 4 million Yemenis work in Saudi Arabia.

The six wars waged by the Houthis, an Iran-backed and armed militia, against the Yemeni government from 2004 to 2011, which coincided with the advent of the so-called Arab Spring uprisings, prompted the Gulf Cooperation Council (GCC) states to put forward an initiative to mediate between the Yemeni fighting factions to quell escalating tensions. This initiative included a transitional implementation plan to pave the way for the peaceful transfer of presidential power from Ali Abdullah Saleh to his deputy, Abdrabbuh Mansur Hadi. The GCC efforts received the support of the five permanent members of the United Nations Security Council and the European Union.

The Iranian-affiliated Houthis tried to take advantage of this chaos to seize the country by interrupting the transitional consensus agreement and opposing the new government, kidnapping and killing government officials, and seizing control of government institutions. Later, they confiscated the central bank, airports, and seaports, which led to the complete control of supplies to most parts of Yemen regions.

Saudi Arabia and the GCC have reached a conclusion that the Houthis sought to establish an Iranian front south of the Gulf region, similar to Hezbollah in Lebanon.

Following the Houthi takeover of Sana’a, the severity of the threat quickly became apparent as well as the likely devastating effects both on Yemen and on Saudi Arabia.

Based on Yemeni President Hadi’s appeals, UN Security Council Resolution 2216 (2015) officially recognized Hadi as the country’s president, and, also called for the Houthis to withdraw from Sana’a, which they seized in 2014. The UN resolution also calls on the Houthis to stop using Yemen as a base to attack neighboring countries. Ever since, forces loyal to Hadi’s internationally recognized government, supported by the Arab coalition, have been battling the Houthi rebels.

Saudi Arabia and the coalition forces in Yemen remain committed to their principles, which can pose a dilemma when confronting the Houthi onslaught. They fight in an effort to force the Houthi rebels to negotiate with the Yemeni government and honor their previous commitments. The coalition was also very keen to preserve the country’s infrastructure and reduce collateral damage, to prevent using disproportionate power, and to safeguard the civilians as much as possible. On the contrary, the Houthis did not adhere to any such principles and continued to target civilians and cities inside Saudi Arabia, including hospitals, schools, and airports; using missiles and UAVs of Iranian origin.

On March 20, 2022, the Houthis launched hostile attacks on oil facilities in Saudi Arabia, including a gas station and other infrastructure facilities in the south of the country. These attacks intended to undermine Saudi Arabia’s capability to be a leading supplier of oil to the world. These attacks by the Houthis were not the first against Saudi Arabia. The Saudi-led coalition in Yemen said that the Houthi group had fired 430 ballistic missiles and 851 armed drones into Saudi Arabia since the civil war started in 2015, killing fifty-nine Saudi civilians.

The Yemeni arena used to be a safe haven to Al Qaeda leaders, due to the fragile security and stability in the country. The U.S. Government and Saudi Arabia had joint efforts to target terrorists and exchange data, which prevented several attacks on U.S. soil. Now, if the Houthis succeed to control Yemen, more terrorist groups will function, and another round of terror and hostility will start there. This also will allow the Houthis to control one of the most important maritime chokepoints in the world, the Bab-el-Mandeb strait. Considered alongside the fact that Iran controls the Strait of Hormuz, this could have a catastrophic impact on international trade and energy supplies. Therefore, intense collaboration between Saudi Arabia and the United States government is vital and needed to deter terrorism.

Saudi Arabia remains committed in its efforts to positively engage Yemen, even as it strives to diminish Houthi capabilities in order to maintain the internationally recognized government. Saudi Arabia provides immense assistance inside Yemen and to the government to sustain public order and internal unity, and has established a specialized center to provide humanitarian relief inside Yemen and other areas. The King Salman Humanitarian and Relief Center has launched more than 680 projects in Yemen, worth over $4 billion, in order to achieve Saudi Arabia’s primary mission “to operate this center based on humanitarian needs.”

All Yemeni parties have recently accepted Saudi Arabia’s calls to meet in Riyadh in order to discuss the deteriorating situation in Yemen. Also, this month, Saudi Arabia and the UAE announced a generous $3 billion support package for Yemen’s economy to help the government. However, the Houthis declined this invitation, revealing their intent on prolonging Yemen’s tragic conflict to serve a foreign agenda. Recently, the U.S. envoy to Yemen, Tim Lenderking, said that Iran is providing significant and lethal support to the Houthis. He also stated, “We would like to see Iran move away from the negative tactics and role they have played up to this point.”

The war in Yemen is far from over due to the ongoing Iranian intervention. The Iranian government continues to illegally and unethically use the Houthis and Yemen as a bargaining chip in the current negotiations to revive the nuclear deal with the P5+1 group.

It is imperative for Saudi Arabia to preserve peace in Yemen and to eliminate any strategic threat on its borders, regardless of the duration and the cost. It is a war of necessity, not a war of choice for the Saudis. The world needs to understand the geographical realities of the region, which is the center of world energy and at the same time is the most fragile in terms of security. There should be greater international appreciation for Saudi Arabia’s pivotal role in upholding security in such a vital region.

Major General (ret.) Ahmed al-Maimouni is Director of Research and Studies Center at the Rasanah institute in Riyadh, Saudi Arabia. He can be reached at [email protected].