Scotland and Ukraine: The Ties That Bind? 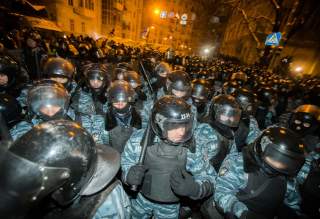 A historian, in 2024, reviews the previous decade: After Chelsea Clinton’s election to the presidency in the fall 2024 elections, it is time to take stock of the lessons of the last ten years for European security. Looking back at the turbulent decade immediately past, it is easy to neglect the role that Europe has played in the growing international disorder. So much has happened elsewhere—throughout the vast arc of instability from North Africa to East Asia, and all points south—that developments in Europe often seemed a sideshow from the main events in international politics. What Europe has lacked by way of grand historical significance in the last few years, however, is more than made up for by the amazing turn of events on the continent ten years previously. A change of course by two leaders in mid-summer 2014 set in motion the most surprising development of the decade. Europe’s southeast, so long beset by ethnic turmoil, was pacified; Europe’s northwest exploded.

No one had anticipated the outbreak of a bitter civil war between Scotland and England; the widespread expectation was of a peaceful settlement. Pessimism, by contrast, was in vogue with regard to the borderlands that divided Russia from its neighbors to the west. The Ukrainian civil war, replete with charges of foreign intervention, was increasingly looking like another Bosnia in the summer of 2014. And that problem from hell, in turn, evoked memories of Sarajevo one hundred years before.

To the surprise of virtually everyone, however, the Ukrainian conflict was settled when President Obama embarked on a bold new policy in mid-July. Acting against the advice of his State Department, Obama withdrew support for Ukraine’s war in the east and told Kiev to grant self-determination to the Russophone population of the Donbass. After a cease-fire, elections would be held under the auspices of a UN peacekeeping force. Ukraine, whose president initially cried betrayal, ultimately agreed to the Obama plan after the United States, the EU and Russia promised significant economic aid to revitalize Ukraine’s economy. Obama made clear that no aid or diplomatic support would be forthcoming, unless the Ukrainians relented in their treatment of the Russophones; that carrot—and that stick—made for a breakthrough.

The voters of the Donbass, grateful that their views were deemed sufficiently important to be registered in a referendum, subsequently rejected independence and worked out a modus vivendi with Kiev on the recognition of their language rights and the protection of their vulnerable industries. Negotiations among the United States, Russia, Ukraine and the EU succeeded in harmonizing the inconsistent requirements of the EU and the Eurasian Union. The main result was that Ukraine gained access to the goods and markets of the EU, while still retaining historic economic ties with Russia; the eastern provinces were accorded a special economic status different from the rest of the country. “The cost of escalating sanctions for all of us,” Obama said in justification of his peace plan, “far outweigh the cost of a generous economic package for Ukraine. Let’s try reconciliation and reconstruction, not war.”

Far different was the scene in Great Britain. As with any civil conflict, enmity between the Scots and English was deeply rooted, its causes lying far back in the mists of time. Soon after the war broke out, Foreign Affairs ran an essay called “1745 and All That,” probing these historic antagonisms and generating much controversy. Political scientists had previously viewed a war between Scotland and England as inconceivable. By 2016, a new revisionist school emerged, holding that the conflict was inevitable and would go on for years.

The spark that really set things aflame—though this was not appreciated immediately—was the decision by Prime Minister David Cameron to reverse his previous decision regarding a Scottish referendum on independence. He had conceded that right in January 2012, but announced on July 15, 2014, that the British government had changed its mind (this occurring at virtually the same moment as Obama’s reversal on Ukraine.) The Scottish referendum scheduled for September 18 was cancelled. Cameron acceded to the criticism that it was a disgrace to allow a referendum for the Scots without giving the English any say, and he now moved resolutely against his previous view, repudiating the Edinburgh Agreement. A small incident caused a furor and hardened feelings on both sides. A reporter for the Daily Mail took a photograph of an official briefing paper that referred to the Scots as the most welfare-, drink- and drug-addicted nation in Europe. The Scots charged that it was a vicious libel; the prime minister’s office first denied the existence of the paper, but later said it reflected a clerical error. Subsequently, the generality of the English, sotto voce, reveled in little asides intimating that truth was indeed an allowable defense according to the law of libel.

In response to Cameron’s diktat, the Scottish National Party vowed to proceed with their referendum anyway, and did so on the previously scheduled date, winning independence by a narrow margin. Cameron denounced the referendum as “an infamous attack on the British Constitution” and vowed that the terrorists who were responsible would be annihilated. “Glory to England!” he exclaimed. Under the English threat of force, the Scots posted men with guns around their public buildings. Cameron responded by stating that “this aggression will not stand.”

After that, came the whirlwind. What began as a small conflict quickly developed into a war with substantial casualties among soldiers and civilians alike. Most observers pegged the overall death toll at about 6,000, but the figure inadequately conveys the scale of the devastation. Cameron brought in Israeli advisers in the war’s initial stages; the recommended methods entailed much irreparable damage to critical civilian infrastructure. After English forces put Edinburgh under siege, Scotland generated huge numbers of internal refugees, ministered to by UN relief agencies in vast tent cities on Scotland’s eastern coast. Due to the terrorist threat, the Open Championship was moved to Australia for the duration of hostilities; Wimbledon was held on grass courts in the United States.

The war lasted two and a half years. At much cost in blood and treasure, the English gained Glasgow and Edinburgh, but could not control the smaller towns or the countryside. After a peace agreement was signed in 2017—with the help of the new American president, Jeb Bush—the fighting came to an end. It might have ended earlier, but Scotland’s resistance was headless: its most important leaders had been killed in targeted assassinations. After the peace accords, much bitterness remained; reconstruction was elusive. Scotland, though independent, was broke; England, now humiliated, was alone. The EU, from which England had exited in the spring of 2015, was unwilling to help. Even America, having previously committed itself to a big package for Ukraine, but suffering anxiety from the stock market crash in the fall of 2016, pled incapacity: “We’ve got plenty of will, but no wallet,” said Bush III.

Obama’s turnabout on the Ukraine crisis was the biggest surprise of his presidency. The president later revealed that he had startled suddenly in late June 2014 with a budding resolution. As he recounted in his memoir: “Perhaps you remember your nightmares as a child, when in your dream you showed up to kindergarten and then realized you’d forgot to put your clothes on,” he wrote. “Seriously, my mortification and embarrassment were exactly like that. I awoke to the horrible realization that, through sheer inattention, I had put Neocon Central in charge of the European and Eurasian Bureau at the State Department, nakedly exposing my administration to a new Cold War.”

In the weeks before his change of heart, after visiting Colorado on a fundraising trip, the president had begun staying up late and surfing the internet. He discovered a range of dissenting views he had never heard of before. He came more and more to distrust both his advisors and the mainstream media. (A prominent theme of Thwarted Hopes, his memoir published in 2019, was that the “bubble” inside the White House effectively denied him access to alternative viewpoints.) By mid-July, as his intellectual revolt gathered force, he felt suddenly free from old restraints. Victoria Nuland was fired; John Kerry was asked to resign. (“Gasbag,” Obama thought to himself, as he accepted the tender.) Later in the month, Obama invited Putin, Merkel and Poroshenko to a week-long conference at Camp David, where the principles of a Ukraine settlement were hammered out. Given how bad things once looked in Ukraine, this was a remarkable and wholly unexpected accomplishment.

Events, however, were moving in the opposite direction in the “Disunited Kingdom.” Whereas recognition of the right of self-determination for minority regions proved to be a formula for peace in Ukraine, Cameron’s repudiation of that right for Scotland was undoubtedly provocative of war. The two cases, indeed, were very similar: A majority and a minority, each of them culturally distinct, had different conceptions of national identity, but also a historic experience of common statehood. The majority opposed a breakup; the minority was closely divided. Among the minority, there was a good case for staying together, but also one for splitting apart. It was a hard case, toward which the population—in Scotland no less than in the Donbass— was split right down the middle.