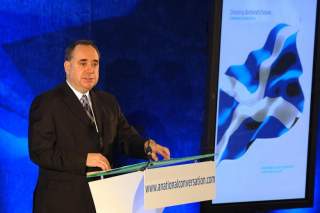 ACROSS THE European Union, many established parties are floundering. Reelection to office is a rare outcome, but the Scottish National Party (SNP) is one of the few ruling parties to be thriving. Since taking charge of Scotland’s autonomous government in 2007, it has enjoyed high poll ratings and has strong expectations of being reelected for a third term in 2016. Except for a four-year break, it has been led by the same individual for nearly a quarter century: a self-confident, popular and utterly disingenuous rogue named Alex Salmond.

A referendum on Scottish independence will take place on September 18, 2014, and the SNP is entering the third year of campaigning. Back in January 2012, the British prime minister, David Cameron, worried by the growing dominance of the SNP, announced that he wanted Scotland to be given the choice between continued membership in the United Kingdom and full independence. The SNP has ever since been in its element. The business of government has been left to a loyal civil service while the party pours its energies into campaigning with an evangelical fervor.

In polls taken in March, “Yes for Scotland,” the party’s proindependence front, is catching up with “Better Together,” the alliance of prounion forces, and in one of them was only five percentage points behind. The SNP is making inroads into voting groups where support has previously been weak, from the numerous liberal professionals in Edinburgh to downscale voters living in moribund postindustrial communities.

Until a few years ago, the SNP was a protest party stuck in the political wilderness. The majority of Scots were skeptical about its claim that the oil wealth discovered in Scottish waters during the 1970s could easily bankroll a separate state. A British outlook endured, though impaired by policies during the 1979–1997 period of Conservative rule that were widely thought to have contributed to the destruction of Scotland’s manufacturing base. It was the difficulties of the normally dominant Labour Party that were crucial, providing an opening for the SNP to working-class voters. Labour in Scotland suffered from the mounting unpopularity of Tony Blair’s ten-year government in London. New Labour’s close ties with corporate interests together with ill-starred interventions in Afghanistan and Iraq went down badly in a Scotland that was tired of Britain’s high-profile foreign commitments and where even much of the middle class is comfortable with a state-directed economy.

The SNP ran a minority government from 2007 to 2011, before winning an outright majority. But the party’s social and economic vision is little different from Labour’s and it has left the civil service to run the country on social-democratic terms. Even during the marathon referendum campaign, it has declined to reveal any kind of political and economic model for the future that would set it apart from the British one. Its 670-page white paper on independence released in November 2013 turned out to be a largely aspirational document that was vague about the shape of things to come.

This reticence makes sense: the SNP’s vision is a reprise of the proglobalization outlook of Blair, the party’s distrusted foe. There is a strong commitment to membership in the European Union even as the readiness of this entity to interfere in the domestic affairs of its members shows no sign of waning. Salmond outstrips Blair in his commitment to green energy, with the SNP claiming that most of Scotland’s energy needs can be derived from renewables by 2020. He is also an ardent supporter of immigration in order to fill skills shortages in the public sector and boost population levels in parts of Scotland that locals are reluctant to live in.

PERHAPS THE secret of the party’s popularity derives from its ability to be seen as an effective resistance force keeping at bay a still-dominant neighbor—England. Resentment toward a territorial partner often depicted as insensitive and overbearing was a powerful subtheme in Scottish popular culture even when the union thrived. Now it has become a mainstream one even as England’s practical influence over Scottish affairs has ebbed away.

The existence of such a powerful neighbor, with a history of subduing the Scots in fierce medieval confrontations, is a lifeline for modern Scottish nationalism. Without an England that can still be depicted as “neocolonial,” it is hard to see what would give such an anemic variety of nationalism any real momentum. Without its own cultural, religious or economic distinctiveness, or widely spoken local language, Scotland lacks some of the building blocks that usually allow a nationalist project to flourish.

The austerity measures pursued by London after 2010 (which were extremely mild in comparison with those applied in EU countries reeling from the euro crisis) were fiercely denounced in Edinburgh. The Scottish government has promised to renationalize the Royal Mail service, raise the minimum wage, maintain universal welfare benefits and increase pensions.

Scotland’s leaders portray the British central state as tight-fisted, but in fact it has shown marked liberality in its approach to financing Scotland’s public expenditure. The Scottish government does not need to raise its own taxes. Instead, Scotland receives a block grant from London; it is not tied to particular spending requirements, leading to levels of public spending in Scotland higher than in much of England. In theory, Edinburgh is free to raise up to 3 percent of its budget through internal taxation. But the SNP has advanced no projects requiring this power to be exercised. It suits its purpose to continue complaining about London’s meanness, insisting that this is what prevents the party from implementing a modernization strategy. Of course, a requirement for Scotland to run its own budget from the taxes of its own citizens would beam the spotlight on the SNP’s spending habits, and the party’s extended honeymoon with the voters might even splutter out.

The SNP’s rhetoric of empowering the poor and needy and standing up to an “imperialistic” English elite plays to a sense of victimhood that currently thrives in Scotland. Polls regularly show that there is not a huge variation between Scottish and English attitudes toward the redistribution of wealth. But there is still no sign of a countermobilization from deductive and practically minded Scots impatient with the SNP’s populist rodomontade. Unless a new center-right party emerges that is able to offer a vision of genuine self-reliance within a decentralized union, the SNP appears unassailable.

Scottish nationalism’s shrill protests about English arrogance and greed doomed a party founded in 1934 to impotence for most of its history. British identity enjoyed strong endorsement down to at least the 1960s. A sense of solidarity operated across society based on vivid memories of common wartime endeavor and post-1945 policies of social reform endorsed by political forces that enjoyed support throughout Britain. But British identity frayed due to the decline of institutions that had helped to maintain cohesiveness. Numerous policy failures—protracted industrial unrest until the mid-1980s, conflict in Northern Ireland and infrastructural failures stand out—encouraged the belief that the political system directed from London was broken. Britain experienced accelerating levels of social change that made it an increasingly complex society to manage. Yet the quality of political leadership failed to keep pace. In power for thirteen years until 2010, the Labour Party played down, and sometimes even mocked, the values and traditions that had reinforced Britishness. Instead, it extolled group identities often based on ethnicity.

The SNP had gotten nowhere when political culture was shaped, as it had been for many generations, around a stoic identity inspired by Protestantism, attachment to the British Empire (in which Scots were prominent at all levels), sport, local institutions, industrial crafts and personal restraint. But in the postindustrial era beginning in the 1980s, a more volatile identity has arisen. Community life and civic activism have retreated. Instead, behavior has grown more privatized, reactive and self-centered. A media culture based around a cult of celebrity, the ridiculing of religion and rampant consumerism has greatly influenced public awareness and tastes. In this environment, an ebullient (not to say egocentric) politician like the SNP’s Salmond has positively thrived.

This edgy, self-obsessed and emotion-laden Scotland has displaced the sober, flinty society of yore. A strong dependency culture has sprung up. Levels of economic inactivity in Scotland are high (in Glasgow, its largest city, the figure in 2012 was 32.7 percent of the adult population). It is downscale Scots whom Alex Salmond and his deputy Nicola Sturgeon target with increasing success. Polls indicate that they are most likely to vote in favor of independence. They increasingly accept the SNP claim that being part of the United Kingdom has deprived Scotland of the income from oil lying off the Scottish coast that could have been used to create a thriving socialist economy. The prounion response is that the transfer of oil income out of Scotland has been nearly balanced out by annual block grants for over four decades and that declining oil revenues simply rule out a new socialist dawn. Some economists warn that to be viable, an independent Scotland will have no choice but to sharply cut back on social expenditures. In early 2014, it was revealed that Salmond’s government was anticipating cuts to jobs, welfare benefits and pensions after independence.