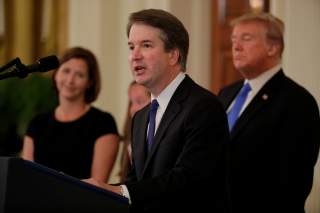 American President Trump has delivered for conservatives by nominating Brett Kavanaugh to the U.S. Supreme Court. The political dimension of this is worth underscoring—had Trump not been elected in 2016, Hillary Clinton would be naming the replacements for two Republican justices, and while a Republican Senate would place a limit on how far left those replacements would be, there is no doubt that Clinton would have reshaped the court for a generation. For instance, conservative activists’ decades-long goal of overturning Roe would be entirely out of reach.

Trump has made the pivotal difference here, not only by winning but by being the kind of leader that he is. Namely, his leadership is one with a transactional approach to politics which gives core supporters the thing they value most, rather than putting his own preferences or desire for popularity first. The two Bushes both longed to be seen as moderate and statesmanlike in addition to being conservative. They also had personal opinions and preferences about judicial nominations. For example, George W. Bush wanted to put his allies Alberto Gonzales and Harriet Miers on the court. In contrast, Trump does not care about being well-liked or respected by his enemies, and he has few personal preferences. He looks at the Supreme Court as part of a deal. And, unlike previous Republican presidents, he has mastered it.

Kavanaugh, who presently sits on the U.S. Court of Appeals for the District of Columbia Circuit, is a pick that pleases the conservative, originalist-leaning Federalist Society, whose executive vice president, Leonard Leo, advised the president’s selection. (Leo is on leave from the Federalist Society while he assists Trump.) The nascent Trump ideological movement—more nationalistic than the GOP that came before it—also favored Kavanaugh over the other judges Trump was considering from the start. This was because Kavanaugh was thought to be the strongest on immigration of any of the contenders. For instance, Ann Coulter is a fan. But so is Akhil Reed Amar, who responded to the nomination with a New York Times op-ed titled “A Liberal’s Case for Brett Kavanaugh,” lauding the choice as “President Trump’s finest hour, his classiest move.” The Yale law professor considers Kavanaugh supremely qualified, serious, and impartial scholar as well as “a great judge.”

The confirmation battle will be brutal, but Kavanaugh’s reputation is such that he should command the support of every Republican in the Senate. In fact, he’ll have to if Democrats uniformly oppose him and John McCain continues to be absent because of illness. Under that scenario, it would only take one GOP defection to sink Kavanaugh’s nomination. And if McCain is present, then there is no guarantee he will vote to confirm a judge who could cement President Trump’s legacy. Two Republican senators who support abortion rights, Susan Collins and Lisa Murkowski, will try to extract a commitment from Kavanaugh to abide by Roe and its legacy. But they know that any other judge Trump nominates would be at least as much a risk to Roe as Kavanaugh would be. The most a pro-Roe Republican can ask for today is ambiguity. Finally, Kavanaugh might be just ambiguous enough, though to all appearances he is far more conservative the justice he would be replacing.

But Not All Conservatives are Happy

However, not everyone on the right is ecstatic about Kavanaugh. Some pundits who are too clever half wish Trump had nominated Amy Coney Barrett, a Catholic mother of seven (including two adopted Haitians), for the sake of "optics" or right-wing identity politics. But Barrett would have been an unnecessary risk. For example, her relative lack of experience would have provided a ready pretext for any wavering Republican senator to vote against her. And Barrett may yet get her chance when Ruth Bader Ginsburg's seat (or Stephen Breyer's) becomes vacant. The risk will be more reasonable when a court majority is not likely to be at stake.

A few social conservatives are not confident that Kavanaugh is better than Justice Kennedy on the question of Roe’s constitutionality. They point to Kavanaugh’s assertion that Roe is the law of the land—which, of course, it is. Supreme Court decisions may be wrong, but they are legally binding so long as they stand, however ethically abhorrent any citizen might find them. One wonders what certain pro-lifers who believe that a judge cannot rule against abortion rights unless he employs the correct natural-law formula would do if they were in the Senate. Would they join with Roe-supporting Democrats to vote against Kavanaugh? There is a reason this position is negligible.

Among libertarian-leaning Republicans, Michigan Congressman Justin Amash worries that Kavanaugh will be a “rubber stamp” for executive power. Kavanaugh does have a record of deference to the executive and legislative branches. This arguably means that he leaves political decisions to the elected branches, where they belong. But critics of the national-security state will remain skeptical of a jurist who took the narrowest view possible (in light of Supreme Court precedents) of Guantanamo detainees’ right to challenge their detention in court. The libertarian whose vote matters in the forthcoming fight to confirm Judge Kavanaugh is Senator Rand Paul, who may very well ask some pointed questions about executive power during the hearings. Yet it’s hard to imagine a scenario, however, in which Paul torpedos the nomination.

Democrats Put to the Test

Furthermore, the vote on Kavanaugh will put Senate Democrats to the test. They know that abortion rights, a non-negotiable commitment for their party, are likely at stake. They are also under pressure from their party’s activist base to resist President Trump in every possible way. But if the vote to confirm Kavanaugh is along party lines, then the myth that the judiciary is insulated from politics will be shattered for good. That myth still matters to Democrats because, even though no conservative has believed it since Robert Bork’s nomination was shot down some thirty years ago, the legitimacy of progressive social gains, including Roe itself, depends on the idea of the Supreme Court as the conscience of the whole nation.

To admit that Supreme Court decisions are not more sacrosanct than, say, Obamacare or the Iran Deal would jeopardize the foundations upon which the modern Democratic Party stands. This is because the Democrats are the party of an administrative elite backed by shock troops drawn from a variety of identity groups. However, that party still attempts to appeal to the average white voter who remains in the majority in almost every state. Powerful myths are needed to fuse these elements together as one American whole, and Democrats rely upon the prestige that a certain elite consensus held among both parties in the late twentieth century. It was a consensus that produced Roe on a Republican-majority Supreme Court and later led the Republican Anthony Kennedy to write in Planned Parenthood v. Casey, “At the heart of liberty is the right to define one’s own concept of existence, of meaning, of the universe, and of the mystery of human life.” Republicans today don’t believe that, but it is, in effect, the formula that Democrats still employ to rationalize their coalition—to claim that it represents the self-defining rural Iowan as much as the self-defining identity-politics activist.

Roe is almost certainly doomed whatever the Democrats do. If Kavanaugh doesn’t become the swing vote in the next big abortion-rights case to come before the court, then Ginsburg’s or Breyer’s replacement will. There simply is no legal doctrine among Federalist Society lawyers that would sustain the 1973 ruling or its sequels. Or if there is such a doctrine, then it is so much in the minority among Federalist Society-vetted judges that it is unlikely any adherent will find his or her way onto the Supreme Court if Trump is making the appointment. This is so despite what overturning Roe might mean for the GOP’s electoral coalition. The Republican Party is dependent on its own myths, after all, and it cannot afford to dispel them even if they threaten to become politically inconvenient. The long-term ramifications of making abortion a fully political question rather than a judicial one might lead to the reconfiguration of both parties. But be that as it may, the GOP and the conservative movement on which it depends can’t turn back now without suffering an equally dramatic disruption.

In his Supreme Court picks, no less than in his trade policy and attitude toward America’s commitments abroad, Donald Trump is shaping up to be an epoch-defining leader. This is a source of horror to progressives and humiliation to NeverTrump nostalgists for the GOP of old. For conservatives, however, it means promises fulfilled and a new beginning, one full of possibilities as well as risks.