Sebastian Kurz and the Rise of the European Millennial 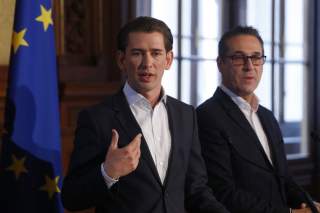 While the United States is governed by its oldest-inaugurated president in history, many of its cousins in Europe seem to be charting a different course. Indeed, many of Trump’s would-be successors—Bernie Sanders, who is seventy-six years old, Joe Biden, who is seventy-four, Elizabeth Warren, who is sixty-eight, and even Hillary Clinton (who celebrates her seventieth birthday today)—seem to be joining in on the American trend of abandoning retirement altogether. Europe is different. The near-assured ascension of thirty-one-year-old Austrian foreign minister Sebastian Kurz to his nation’s highest post would make him the world’s youngest leader, beating a contemporary in North Korea by a debated number of years.

Kurz is “slick and opportunistic, the polar opposite of Angela Merkel,” the German chancellor, in style and deed, says Clay Clemens, European politics professor at the College of William & Mary. “The anti-establishment mood is strong everywhere, but especially in Austria,” Clemens tells me, arguing that Kurz is “a young careerist” in the mold of the Jupiterian current president of France. “When party brass told him to wait his turn, he turned on its leadership and made full use of its unpopularity to fashion a Macron-style candidacy… His huge network of younger contacts was a huge asset.”

Emmanuel Macron, thirty-nine, is Kurz’s most prominent peer, but Alexis Tsipras, forty-three, of Greece and Spanish opposition politician Pablo Iglesias, thirty-nine, are other examples. If you have access to a time machine, beam the headline “Trump and Greek PM Alexis Tsipras hold joint White House press conference” from last week to our friends in 2014, who would be gobsmacked by the joint rise of the populist-right outsider and the radical left Greek (reportedly, the two actually got along swimmingly).

Not long ago, Britain was governed by the so-called Bullingdon Set, a group of top British politicians and aides, all under the age of fifty and educated at Oxford. In 2010, George Osborne, at age thirty-eight, became the youngest Chancellor of the Exchequer in modern times, no slouch position—treasurer in the world’s preeminent financial city.

What enabled their rise was, in part, a different European approach to politics: acceptance of politics as a vocation in and of itself. Osborne biographer Janan Ganesh writes in his 2012 book, The Austerity Chancellor: “Politics is a trade with its own skills and codes that can only be learned on the job. It is not an amateur vocation for talented people from other fields.” By American standards, the prime minister Osborne served, David Cameron, never had an honest job in his life: he started working for the Conservative Party straight out of school, not uncommon for Europols. By contrast, Donald Trump owes his residency at 1600 Pennsylvania Avenue in no small part to his reputation as a businessman and a complete outsider. At thirty-one years of age, Sebastian Kurz wouldn’t even be eligible for the U.S. presidency.

But another factor is at work in Kurz’s rise, one he shares with Trump: antipathy toward immigration—and the global rise of the city. Kurz is part of Austria’s long-reigning, center-right Austrian People’s Party, but many argue that he was only able to keep the establishment in power by cribbing much of the platform of his rival, the hardline Freedom Party. Earlier this week, Kurz invited them into government, a dramatic move for a political party once broadly viewed in the Austrian public as unacceptable.

“Given the dual shocks of the terrorism and the sheer numbers of the 2015 influx [of North African and Middle Eastern migrants], it’s almost surprising these wins for the right didn’t come sooner,” Scott McConnell, founding editor of The American Conservative, tells me. He argues: “It’s a good thing if the center-right parties are pushed to take Gaullist positions,” in the style of the late giant of French politics, “even it takes the far-right to push them there. . . . It, at least, means actual election results are beginning to align with voter sentiment on immigration, which is pretty decisively in favor of restriction.” Even Macron, ostensibly a centrist, has struck a sterner note on immigration than expected, and he’s stood by controversial comments that sub-Saharan Africa’s problems partially emanate from impoverished women recklessly having too many children.

Like Trump, Kurz is ironically from his country’s most prominent city, but it didn’t matter, as both took up the mantle of traitors to their class. “Vienna is to Austria what not only DC, but New York, Chicago and Hollywood are to the U.S.,” says Clemans. “Suburban, small town and rural folk resent it,” and Kurz was deftly able to exploit “latent anti-Vienna sentiment.” Clemens adds: “Beyond Vienna, it is a pretty cozy, insular country, so as elsewhere, lots of people reacted against the image of uncontrolled borders and people who seem very alien.” The turn rightward seems, at current, almost unstoppable. Merkel lost seats last month in her re-election bid with an electoral strategy, of in part, appealing to the center-left. Kurz did the opposite: “he went the other way and gained.”

For some, the murderous history of the hard right in the German world is not far from any conversations concerning the rise of Kurz, the Freedom Party and Merkel’s rivals, the Alternativ für Deutschland (AfD). But Kurz—and possibly the Freedom Party—are in charge in Vienna; the AfD is still in opposition. An advisor to the Pentagon who has worked in the region (where the United States has had significant military assets since the World War II) tells me the Denazification regime in Austria, though the birthplace of the Hitler, was much less stringent than it was in Germany. “Austria never did what the Germans did after the war,” Austrian specialist Oliver Rathkolb told the New York Times in 1986. “They never accepted historical and moral responsibility for what happened here. Everything was the fault of the Germans, plus a few horrid Austrian Nazis.”

Indeed, economic success and the stigma of the past, until now, have made Germany under Merkel some of the least fertile ground in Europe for populism. It’s rife elsewhere. A friend who travels in right-wing circles tells me: “I don’t have a single European millennial friend who isn’t a supporter of a party considered ‘radical’ by U.S. media standards. . . . In Austria’s case, they’re mad as hell about refugees.”

What remains to be seen, as in the United States, is whether this nationalist fervor can be translated into actual policy. President Trump has seen his domestic agenda stalled in his first year: no real border wall in sight, though illegal border crossings are sharply down. In Austria, McConnell notes reform is “complicated because the European states have ceded a good deal of their power to Brussels.” Time to see what Kurz has got up his sleeve.

Image: Head of the People's Party (OeVP) Sebastian Kurz (L) and head of the Freedom Party (FPOe) Heinz-Christian Strache address the media after their first round of coalition talks in Vienna, Austria, October 25, 2017. REUTERS/Leonhard Foeger​