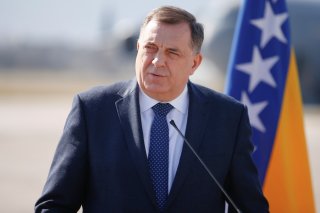 Milorad Dodik, the Serb member of Bosnia and Herzegovina’s three-person presidency, poses the most serious secessionist threat to the country since the end of the Bosnian War twenty-six years ago. The current crisis threatens to unravel the painstakingly accomplished progress towards creating a functioning country that started when the terms of the Dayton Peace Agreement (DPA) were finalized on November 21, 1995.

The DPA ended the Bosnian War, which killed 100,000 people, displaced some 2.2 million from their homes, and divided the country into two entities: the majority Serb Republika Srpska that occupies 49 percent of the territory and the majority Bosniak and Croat Federation of Bosnia and Herzegovina. While postwar progress was slow due to domestic and regional forces that tried to further divide the country, it nevertheless came through the gradual strengthening of the common state-level institutions that were needed to preserve the country’s territorial integrity. The unification of the three disparate armies that fought each other during the Bosnian War into the Armed Forces of Bosnia and Herzegovina in December 2005 marked a high point of this process.

But Dodik, once hailed by Madeleine Albright as a “breath of fresh air” in the Balkans and the Serb who positioned himself as a moderate alternative to the hardline nationalist Serb Democratic Party (SDS) in the aftermath of the Bosnian War, now mounts the most credible threat to the dissolution of Bosnia and Herzegovina. He recently threatened to annul all decisions relating to the transfer of authority from Republika Srpska to the highest level of government because of the July enactment of a law banning the denial of the Srebrenica genocide of Bosniaks by the Bosnian Serb Army in 1995.

This threat demonstrates Dodik’s radical transformation from a moderate politician who recognized the Srebrenica genocide to a hardline nationalist who opened a student housing center named after Radovan Karadžić, the founder of SDS who the International Criminal Tribunal for the Former Yugoslavia found guilty of genocide, crimes against humanity, and war crimes for his role in the Bosnian War.

Following through on this threat would effectively dissolve Bosnia and Herzegovina. Dodik intends to annul 140 laws tied to decisions made by the Office of the High Representative for Bosnia and Herzegovina (OHR), the international peace envoy with the authority to single-handedly adopt laws when local parties are unwilling to act. The goal of Dodik’s proposed annulment is to hand control from state-level institutions back down to Republika Srpska at the entity level, essentially resetting the country to its makeup in 1995 when the DPA was signed.

Among the proposed changes is the annulment of laws establishing the state-level judiciary, intelligence agency, tax administration, armed forces, and other institutions. While all of these proposed changes are worrisome because they would cripple the ability of the country to function, breaking up the armed forces is the most dangerous. The threat of this action is particularly harrowing in a country whose population has suffered some of the worst war crimes on European soil since World War II. Not only would the army’s dissolution increase anxieties and the potential for future conflict, but it would also deal a devastating blow to Bosnia and Herzegovina’s postwar progress by stripping it of its biggest success story.

Dodik knows that Bosnia’s future is subject to regional and international power arrangements, and those arrangements seem more favorable to his goals than ever before. Russia, his most powerful backer, does not have many outright allies remaining in the Western Balkans. The accession of Montenegro and North Macedonia to the North Atlantic Treaty Organization (NATO) elevated the importance of Russia’s relationships with Serbia and Bosnia and Herzegovina, the only two countries in the Western Balkans not part of NATO.

While the Kremlin’s relationship with the current Serbian regime is not as ideal as it first appears, Russia’s veto in the United Nations Security Council (UNSC) is crucial for Serbia in the Kosovo dispute, enabling Russia to exert influence on Serbia’s foreign policy vis-à-vis NATO and the European Union (EU).

Regarding Bosnia and Herzegovina, Russia is aware that complex decision-making procedures allow representatives from each of its three “constituent peoples,” the Bosniaks, Croats, and Serbs, to block any decision they find unfavorable. Therefore, by keeping a close relationship with authorities in Republika Srpska and fomenting ethnic tensions, Russia knows it is impossible for the country to adopt foreign policies that oppose Russian interests.

The existence of the OHR is the greatest impediment to this Russian strategy because the institution’s main purpose is to counteract threats to the territorial integrity and sovereignty of Bosnia and Herzegovina. This is why Russia and China tried to strip the office of its powers and shut it down. While they failed in this effort, Russia and China only accepted the extension of a small EU peacekeeping force in Bosnia and Herzegovina on the condition that the resolution before the UN Security Council (UNSC) remove any mention of the OHR. Both Russia and Dodik maintain that the OHR is illegitimate without the explicit approval of the UNSC. On the other hand, Serbian president Aleksandar Vučić met with the high representative in September of this year amid Russia and Dodik’s claims of his illegitimacy. This meeting illustrates Vučić’s two-faced effort to maintain the illusion of Serbia’s EU path while preserving a good relationship with Russia.

With regards to Republika Srpska, it is no secret that Dodik would like its status to be inextricably tied to the Kosovo issue—whatever Serbia would lose in Kosovo, it would gain in Republika Srpska. While this outcome could conveniently repair the image of Vučić’s regime as it faces potential losses in a Kosovo situation that is far from optimal, it could also mean that it would replace one problem with another: serious conflict arising in Bosnia. Vučić only wants the Bosnian crisis to escalate to the degree it would benefit his regime, but there is reason to believe that Dodik, emboldened by Russia, could escalate it further than that. In that case, failure to support ethnic Serbs in Bosnia would not be good for Vučić’s domestic political image.

Ironically, Vučić’s political journey was the reverse of Dodik’s. Vučić started his political career in the far-right Serbian Radical Party with the professed goal of creating Greater Serbia, a state incorporating all regions of traditional significance to the Serbs. During the Bosnian War, he was filmed visiting the Serb forces that kept Sarajevo under siege for 1,425 days. He also infamously served as the minister of information from 1998 to 2000 in Slobodan Milošević’s Serbian nationalist regime. Yet, since returning to government in 2012, he has positioned himself as a moderate politician standing in the way of more radical domestic political forces.

However, democratic standards, particularly media freedoms, have suffered during Vučić’s rule. Despite his negative track record vis-à-vis normative values, the EU is eager to promote itself in the Western Balkans and has been very tolerant of Vučić. Populist authoritarian leaders heading EU countries like Czechia, Hungary, Poland, and Slovenia have certainly contributed to the EU’s tolerance of Vučić but should not be mistaken as the sole reason.

It is the international camaraderie between populist right forces that distinguishes Dodik’s position from that of Bosnian Serb secessionists in the early 1990s. His appearance at the fourth Budapest Demographic Summit alongside Vučić and the populist leaders of Czechia, Hungary, and Slovenia is an unmistakable sign that he is a part of a “club.” Despite Dodik’s secessionist threats and the EU’s effort to make him “walk them back,” Hungary’s Prime Minister Viktor Orban visited Dodik and then Dodik visited Slovenia where he spoke with Prime Minister Janez Janša. Neither leader hid their sympathies for Dodik; Orban’s visit was especially telling as he did not visit Bosnia and Herzegovina’s capital of Sarajevo but instead met with Dodik in Banja Luka, the de facto capital of Republika Srpska. Because Dodik has allies in some EU countries, he has successfully managed to evade EU sanctions, if not entirely then at least in significant part.

The EU should be the principal actor resolving issues in the Western Balkans, including the threat of secession in Bosnia and Herzegovina. At least on paper, each of the region’s countries aspires to become EU members. Yet the bloc has not acted decisively to show Dodik that there is no room for secessionism in Bosnia. Unlike the EU, the United States has acted with resolve in the past. It imposed travel and financial sanctions against Dodik in 2017, citing his obstruction of DPA implementation amid calls to withdraw Republika Srpska from the armed forces and his defiance of the constitutional court. If the EU had followed suit and enacted similar sanctions, one might question whether Dodik would be entertaining a similar threat now.

Dodik’s renewed push for secession does not indicate that sanctions have no effect; rather, it indicates the need for a coordinated response from the United States and EU. Both should levy further sanctions that would target companies close to Dodik and his government. Considering that it is unlikely the EU will pass unanimous bloc-wide sanctions, the member countries willing to impose sanctions should do so. Even if such sanctions ultimately fail to make Dodik backtrack his secessionist threat, they are worth implementing. For the United States, sanctions are currently preferable to putting NATO boots on the ground as the physical guarantor of peace. Moreover, sanctions are certainly worth trying in order to push the country away from the edge of renewed conflict and preserve the postwar progress that Bosnia and Herzegovina has made since 1995.