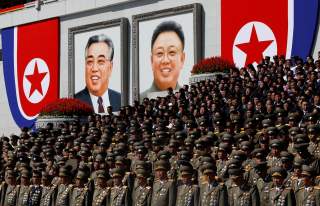 The White House is now signaling that another summit between President Donald Trump and North Korean supreme leader Kim Jong-un is imminent. The South Korean president, Moon Jae-in, strongly supported this in his public statements during his recent trip to the United States. Moon has asserted, in the face of skepticism that North Korea is once again gimmicking negotiations, that this time is different because the interaction is occurring at the summit level.

It is true that summit diplomacy with North Korea is new. Never before has a U.S. president meet with Kim. And Moon has had more summits with Kim in nine months than all his predecessors combined. In 2018, there have been four summits so far with Kim—one with America and three with South Korea. The symbolism and pageantry have been spectacular. Both Trump and Moon have a good sense of television, and the events have been dramatic, even entertaining. The media routinely refer to them as “historic.”

But it is also not true, per Moon, that these summits are leading to dramatic breakthroughs. The most important—the summit with Trump in Singapore in June—returned a final statement filled with traditional North Korean vagueness and soft, non-commitments. As many pointed out at the time, the Singapore statement was actually a step back from previous U.S.-North Korean statements. Trump has a well-known tendency to dramatically oversell his international achievements, and the hype around Singapore was substantial. But even Trump’s personal presence could not pull out of Kim anything more than America has gotten in the past.

Moon has tried to shore this up by insisting that North Korean promises are more meaningful this time because this Kim is different from his predecessors and his promises have been so high-profile and public that they are sturdier than in the past. These are slim reeds. Until January of this year, Kim was just another murderous tyrant in his father and grandfather’s mold. He still is, of course, but suddenly he has been rebranded this year as someone America can work with, despite no meaningful change in the internal politics of North Korean governance.

Nor is it at all clear that the North Koreans are taking denuclearization any more seriously than in the past just because of the high-profile character of all this. This may indeed be Moon’s strategy—by tying Kim into these very public statements, hopefully, it is harder for him to backtrack. But we have no actual evidence that Kim feels that way.

And the concessions from this year’s summit-level diplomacy have not been better than anything working-level talks have achieved in the past. Humanitarian concessions—such as hostage releases, the return of U.S. war dead remains, and family reunions—are good, of course, for moral reasons. And America should be willing to counter-concede something small in return—aid or minor sanctions relief would be my preference. But they are not the strategic issues at the heart of the dispute and certainly not worth major concessions from the U.S.-South Korean camp. North Korea has, as in the past, used these minor concessions to muddy the waters and change the subject.

On strategic and military issues, North Korea has offered to close a launch pad, engine test site, and nuclear testing location. This, too, is good, and America should counter-concede for them too. Case-by-case military exercise halts are one possibility. But again, these are small concessions. Testing facilities may not be that valuable anymore now that the North Korean nuclear and missile programs are pretty mature. Moreover, the nuclear test site may already have been compromised, and inspectors have not directly verified any build-downs, so this is still speculative.

In short, all the hype about summit diplomacy has not really changed that much. And certainly, the changes have not matched the weight of the summit level where the discussions have occurred. It is disappointing that the personal intervention of both the U.S. and South Korean presidents has achieved so little, while North Korea has accrued the prestige gains of these direct meetings.

North Korea is small, loathed, and isolated state, yet this year its leader has been received as an equal by no less than the U.S. president and regularly meeting with the South Korean president with great media coverage. That is an enormous, legitimating achievement—for which the United States and South Korea have received nothing that working-level efforts with North Korea have not yielded in the past.

For this reason, Trump should not meet with Kim again unless he can get something much more substantial out of him. A meeting with the U.S. president is a concession in itself. As the most powerful state in the global system and center of global order for decades, a presidential meeting carries enormous legitimating weight for the recipient. This is why no U.S. president ever met the North Korean leader before. Recipients, especially dictators, must earn that privilege, and Kim, quite obviously, has not.

If Trump must meet him again—and he will, if only for the much-craved TV coverage—he should at least get something real for it. Denuclearization cannot proceed until the North Koreans give America a declaration of what they have—warheads, missiles, fissile material. That is the next step if the North is serious. Trump should, at a minimum, demand that in exchange for the meeting or otherwise not go.