Secret Sites in the Desert: The Dangers of Saudi Arabia’s Nuclear Hedging 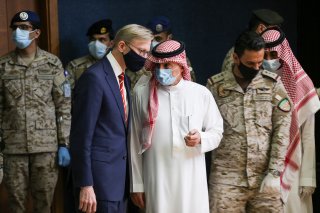 Despite this lack of an agreement, Washington reportedly green-lit deals with Riyadh for seven U.S. firms to engage in “preliminary work on nuclear power ahead of any deal but not [to] ship equipment that would go into a plant,” Reuters reported. The names of the firms remain secret, a controversy that has led to whistleblowing and congressional accusations that the administration is not enforcing nonproliferation norms.

Also in contrast to the UAE, Riyadh has not signed an IAEA Additional Protocol (AP), which it could bring into force to rescind its SQP, even if the CSA is not yet in force. An AP provides the IAEA with enhanced verification authorities. Currently, U.S. nuclear assistance is rendered overwhelmingly to countries with additional protocols.

A failure to implement the IAEA’s strongest suite of safeguards at a time when Saudi nuclear capabilities appear to have jumped ahead could allow the Saudis to initially hide certain nuclear activities without them being subject to IAEA inspections.

Beijing’s involvement in Riyadh’s nuclear program raises multiple challenges. In the past, China has not been a trustworthy partner in preventing proliferation of nuclear technology. As strategic competition intensifies between the United States and China, Washington may find that Beijing may show even less concern for existing nonproliferation and nuclear supply norms.

Prior to 2004, when China joined the Nuclear Suppliers Group (NSG)—a group of states that is committed to preventing proliferation of sensitive nuclear technologies—Beijing sold problematic nuclear facilities and materials to Iran, North Korea, Pakistan, India, South Africa, Algeria, and Argentina. It has also failed to adequately prevent the supply of nuclear-related equipment and commodities by Chinese companies or foreign-owned companies operating on its soil.

The Institute for Science and International Security assesses that the second site under watch by intelligence agencies in Saudi Arabia closely resembles the Iranian uranium conversion site at Esfahan, which China provided. In the past, China also provided uranium mining, milling, fuel fabrication, and other nuclear-related assistance to the Islamic Republic.

Seen in this light, China’s nuclear cooperation with Saudi Arabia is likely commercial in nature, rather than the result of a strategic preference for regional supremacy by either Riyadh or Tehran. But such mercantilist considerations can create long-term opportunities for China to tempt states like Saudi Arabia out of the American orbit. In the short-to-medium term, however, Chinese assistance to Riyadh complicates Washington’s efforts to rein in Tehran’s nuclear program.

Washington has vast challenges ahead in stemming additional nuclear proliferation in the Middle East.

The situation in Saudi Arabia recalls the recent past with Iran: intelligence agencies leaking concerns about nuclear proliferation to the media, and experts identifying covert nuclear sites in the desert. The U.S. intelligence community’s expressions of concern about Saudi nuclear proliferation are likely intended to gain broad support for collective international efforts to prevent it.

The stakes are high. If the United States fails in convincing Saudi Arabia, a regional partner, not to opt for domestic enrichment, then it will face greater hurdles getting Iran to accept limits on its own program. If the two become locked in a race for nuclear supremacy, then both countries could claim a security-based need to make nuclear weapons that might garner less outrage from the international community than if only one had developed nuclear weapons. This, in turn, would not only undercut the non-proliferation regime but trigger a cascade of regional proliferation likely beginning with Turkey or Egypt.

Washington should encourage and incentivize Riyadh to immediately bring into force its CSA, conclude an AP, and forswear enrichment and reprocessing. The United States should further underscore that close bilateral military relations and other strategic partnerships could be threatened if Riyadh seeks nuclear weapons. In so doing, the United States should not hesitate to reference how Iran’s nuclear ambitions made it into an international target.

America should also work closely with allies and partners to convince Beijing to halt its nuclear assistance to Saudi Arabia and work within the NSG to urge other nations not to supply advanced fuel cycle capabilities to Riyadh. As a backstop, Washington could consider sanctions against China if it chooses to assist the Saudis, given the current opaque status of the kingdom’s nuclear intentions.

U.S. foreign policy need not pit regional efforts such as countering Iran against functional ones such as countering the spread of nuclear weapons in the region. Uniform rather than select enforcement of non-proliferation-related norms and rules will benefit Washington in the long-run and stem a wave of proliferation backed by America’s near peer-competitors.

Andrea Stricker is a research fellow at the Foundation for Defense of Democracies (FDD), where she focuses on nonproliferation. Previously, she was a senior analyst at the Institute for Science and International Security, where she co-authored five books on nuclear proliferation. Behnam Ben Taleblu is a Senior Fellow at FDD, where he focuses on Iranian security and political issues, as well as their intersection with U.S. foreign policy in the Middle East. He has testified before the U.S. Congress and Canadian Parliament and provided oral evidence to the U.K. Parliament.