Security Contractors in the Middle East: First the Americans and Now the Russians 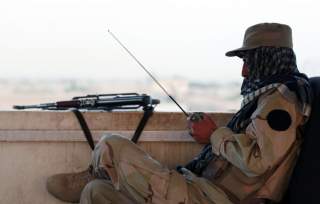 There is much in the current news about Russian security contractors dying in Syria. It must be remembered that the Russian contractors were preceded by American security contractors, who came to total more than twenty-five thousand in Iraq in 2009. The difference between the two is that there are mechanisms for accountability in the United States when contractors violate their mandate or international law.

The most infamous private security firm was Blackwater, the company founded by Erik Prince, who recently touted that he could win the war in Afghanistan with his latest company, Frontier Services Group.

Blackwater came to represent all that was wrong in the outsourcing of the war in Iraq (2003–2011). During that time frame, for the first time in U.S. history, private for-profit contractors were equal in number to U.S. troops. Secretary of Defense Robert Gates used the term “willy-nilly” to describe the exponential growth in the use of private contractors. Prince’s Blackwater has the dubious distinction of being the focus of a U.S. House of Representatives investigation in October 2007, as its activity in Iraq and Afghanistan included shooting incidents, contracts in excess of $1 billion, and escalation of force incidents. Four Blackwater personnel were also responsible for the massacre of seventeen Iraqi civilians in Bagdad’s Nisour Square in 2007. The delay in bringing them to trial in the United States created a great deal of anger within Iraq and provided a powerful rallying cry for Islamic extremists.

There are many opaque, if not hidden, reasons for using contractors. While U.S. contractors in Iraq were not specifically destined for combat, unlike the Russians in Syria, they were heavily armed, and in responding to threats they engaged in hostilities. There are myriad reasons to use contractors in combat situations. While the numbers of uniformed military personnel are readily known, those of contractors are not; contractors can provide extra forces that are not acknowledged, and with their death there is less attention than with uniformed personnel; the legal status of contractors is extremely ambiguous, as international law is weak and national laws generally do not apply; and furnishing contractors, as was the case with Blackwater, can be very lucrative indeed.

Thomas Bruneau is Distinguished Professor Emeritus at the Naval Postgraduate School. He researches, teaches, and writes on topics including civil-military relations, intelligence, and contracting out security. His Patriots for Profit: Contractors and the Military in U.S. National Security was published by Stanford University Press in 2011.

Commander Daniel G. Straub is a Senior Military Fellow at Center for a New American Security and holds a PhD in Security Studies from Naval Postgraduate School. While at NPS his research focused on non-traditional uses of Private Security Companies. His views are his own and do not represent those of any part of the U.S. government.