Security and Prosperity in Africa Go Hand in Hand 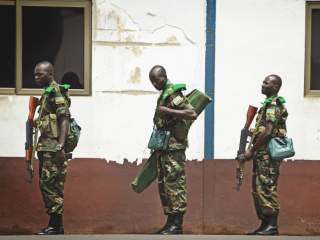 Earlier this month, at its headquarters in Stuttgart, Germany, U.S. Africa Command (AFRICOM) unveiled its latest five-year plan for the region. Among other objectives, the new strategy seeks to “contain” both the ISIS-aligned Boko Haram group in West Africa and ISIS’s satellite province in the failed state of Libya. By contrast, in war-torn Somalia, home to the Al Qaeda–affiliated Al-Shabab militia, the plan is to outright “neutralize” the threat, and ultimately hand over responsibility for securing the country to the Somali government under the aegis of the African Union Mission in Somalia. In the Gulf of Guinea and Central Africa, meanwhile, the proposal calls for disrupting smugglers’ routes and the criminal cartels that use them to traffic in humans, weapons and drugs. In all these troubled lands, AFRICOM hopes to develop a cadre of regional soldiers to serve as the main peacekeeping forces and disaster-assistance providers for a generation to come.

This vital agenda is ambitious for a small division with only one permanent base on the African continent (in Djibouti). With limited resources, AFRICOM appears to be pursuing a triage approach: Deal a deathblow to the militia in Somalia that has been most effectively degraded in recent years while striving to weaken and limit the spread of ISIS and its potent West African ally, Boko Haram, each of which appears to have the wind at its back. The concurrent goals of interdicting criminal networks and preparing African troops to hold their own territories go to the heart of the challenges the continent faces. After all, terrorism thrives in environments where the government is too corrupt to provide for its people and too dysfunctional to fight its enemies. Organized crime, snaking across Africa, is both a symptom of this dynamic and a lifeline for those criminals who kill not for greed but for ideas. In the twenty-first century, there is so much overlap between those who traffic in weapons and those who use them that it is impossible to make a clear distinction between the two.

Without minimizing the difficulty of countering the likes of ISIS, the second set of goals—building governance and demolishing cartels—is a challenge that goes beyond what the military might can do. Consider, for example, that the smugglers’ routes of Central Africa and the Gulf of Guinea—themselves only a small portion of a criminal architecture spanning the continent—are not only a lifeline for terrorists but also a livelihood for legions of poor people, in economically barren areas with bleak prospects for work. Without a parallel program to develop the economies that immediately surround the criminal activity, Western militaries may be viewed by much of the local population as a disruptive force indifferent to their well-being. Consider as well that most of the training provided these African countries is purely technical in nature—how to fight, how to shoot—and therefore entirely transferable. In other words, absent an educational process that teaches the African brigades why they are fighting to protect the borders of a state—why the cause of nation building is a virtue and the cause of a false caliph is a vice—their loyalty is vulnerable. It’s vulnerable to the ideological overtures of ISIS, as well as the promise of a better living from a criminal enterprise.

Americans have seen the result of the latter trend repeatedly: In Afghanistan, an unacceptable number of American-trained troops joined the Taliban and the heroine cartels. In Iraq, years of soldier training did not yield a fighting force capable of defending or taking back the country from the Islamic State. And in Syria, there has been enormous crossover between the Free Syrian Army—supported, to some degree, by Western nations—and the jihadist groups the United States now fights. This past week saw reports that the United States is mulling a new military deployment in Libya with the goal of stopping ISIS from taking over the country. If the plan is pursued, it would signal a commitment of resources beyond the purview of AFRICOM. But meanwhile in Libya, the bright hopes of 2012 for a sustained American commitment to political and economic development have long since gone. That shortcoming on the part of the United States is inseparable from the conditions that brought about civil war and jihadist enclaves in the country in the first place, now perhaps requiring an even greater expenditure of hardware and brawn to mop up the mess. What applies to Libya applies to its many neighbors south of the Sahara as well.

A facet of these problems, in turn, was dramatically illustrated this week by a new report from Transparency International, the Government Defense Anti-Corruption Index for Africa, which documents the massive graft in defense expenditures across the continent. In nearly every country in Africa, at nearly every level, funds and equipment are systematically plundered, such that forty-seven out of the fifty-four African countries surveyed received a failing or near-failing grade.

AFRICOM’s leadership is not unaware of these problems. In 2012, Major General Charles Hooper, then the Director of Strategy, Plans and Programs for the group, acknowledged the interplay of crime and corruption, economic malaise and terrorism in a significant article in the Joint Forces Quarterly. It was clear from his formulation, and numerous other statements from AFRICOM officials, that there was a desire to invest what was needed for the economic development of the organization’s partnering nations. But defense cutbacks and the general relegation of Africa to the backwaters of Washington policy have prevented the United States from acting on these instincts. Meanwhile, the problem of providing integrity training to African troops alongside their weapons instruction remains largely absent from American deliberations.

The United States can and should do more on both tracks. With respect to economic development, it can build on the principles of partnership to which the White House committed during the 2014 African Leaders Summit in Washington, and the goodwill generated by the president’s landmark visit to Kenya a year later. With respect to integrity training, the United States also has proven capacities that can be applied to Africa. In Colombia and Mexico over the past two decades, for example, a small American NGO with U.S. government support was able to introduce curricula and training modules to bolster security sector trainees’ commitment to their nation-states and the populations they serve. They learned that by serving the people with integrity and living by the laws of the state they were sworn to uphold, they ultimately protected themselves and enriched their environments by supporting the conditions necessary for an economy to flourish. Migrating this expertise to Africa should be a global security priority.

It should also be recognized that some countries in Africa have indeed managed to build viable polities, secure them and sustain them—and can do much to assist the goals of stabilization to which AFRICOM aspires. One such country is Morocco, a staunch American ally. Its king, Mohammed VI, has combined staunch security cooperation with African nations with billions in investment in their economic and political development. Just this week, the monarchy announced the commitment of $620 million to a fertilizer plant, a sixty-two-megawatt solar station and a seawater desalinization facility for the continent. It provides an example of the kind of south-south cooperation that stands to be augmented by American partnership. As Americans hopefully work harder to support the sustainability in Africa that goes hand in hand with security efforts, they will find many friends, all too willing to assist.