To See How Fractured the GOP Has Become, Simply Look at the Senate 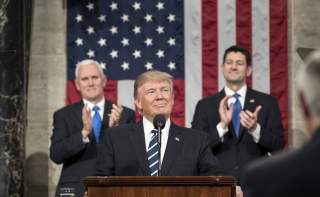 When the Renaissance painting of the recent Republican health-care fight is complete, it will show Rand Paul standing to the right gesturing emphatically, Susan Collins on the left—a model of stoic resolution—and Paul Ryan, Mitch McConnell, and Donald Trump sitting on cushions in between with choleric expressions on their faces a la the three disciples at the edge of the table in “The Last Supper.” It’s those first two who should draw our eyes. I’ve argued before that Republicans are less a unified party than a disorderly governing coalition and the Better Care Reconciliation Act’s (BCRA) failure is the most vivid demonstration of that yet.

It was the conservative faction that drove the dagger into the BCRA last night, as Senators Mike Lee and Jerry Moran announced their opposition. But it was also mere happenstance that they were the ones who broke the fifty-vote threshold. Close to a dozen other skeptical senators might have delivered the death blow and no doubt today they’re all stepping forward: “I am Mike Lee.” “And I am Mike Lee.” The real reason for the BCRA’s untimely demise is that it was a product of the mushy middle. It rearranged America’s health-care infrastructure but not enough to make an ameliorative difference. It was contrived to placate both the tea partiers and the centrists embodied by that Paul-Collins pairing, and in doing so it ended up pleasing neither.

There’s blame to go around here. Mitch McConnell is a masterful legislative wizard who uttered just about every incantation in his spell book to see health reform through, but he surely deserves some fault. How could he have spent six years winning elections on an anti-Obamacare platform without drafting a replacement, holding rump sessions to build consensus, getting something ready to go in the event that a Republican won the White House? How could Republican leadership have seriously thought that health reform could be passed by President’s Day in February, as Politico reports they did? And of course Trump himself has been damagingly aloof throughout this process, though he’s been present for far less of it than has congressional leadership.

But the real culpability falls on the Republican Party itself, which since the Bush administration has grown to house an increasingly fractious and contradictory band of activists and politicians. There’s a tea party wing, a compassionate conservative wing, a security hawk wing, a centrist wing—trying to shepherd anything through them is a supremely difficult task. In 2009, the conservative mind briefly converted to small-government libertarianism, resulting in a wave of tea party lawmakers like Paul and Lee. Skip to this week and they were objecting (quite rationally) that the BCRA merely airbrushes Obamacare and doesn’t do enough to arrest rising premiums. But a Mike Lee probably couldn’t win in New England, which is why the GOP tent also covers centrists like Collins who deplored the BCRA’s cancellation of Planned Parenthood funding.

Then there’s Shelley Moore Capito. More than any other senator she stands at the crossroads of the querulous GOP. Capito hails from West Virginia, a state that despises Obamacare at least in theory but also heavily relies on Medicaid; that loves Donald Trump but is deeply skeptical of the health bill he endorsed. Capito initially blowtorched the BCRA, declaring that she would happily kill it if it remained in its current form because it drilled too deeply into Medicaid. After it was revised to include additional funding for anti-opioid initiatives, she suddenly grew taciturn, saying only that she was assessing the new bill. Yet it still contained those Medicaid cuts, and when Paul and Collins plopped into the “no” column, she probably mulled joining them and killing the bill for good. Lee and Moran beat her to it.

After the BCRA had perished, Trump flung a Hail Mary by suggesting that Obamacare might still be repealed without a replacement. Capito was among three senators who immediately swatted down his proposal. That was it: Health reform was dead and embalmed in irony. Over the past two decades West Virginia has shifted from blue to red thanks in part to President Barack Obama’s tinkering with the health-care system. Yet the state’s native senator helped cement Obamacare in law—at least for now. Why? Because a political party in a democracy is the sum of its voters, and by expanding into impoverished states like West Virginia and former union strongholds like Michigan, the GOP has changed itself. The FDR ex-Democrats Capito represents might like the crusading spirit of the tea party—but the substance? Shrunken entitlements and rolled back financial regulations? Donald Trump’s ballad of economic nationalism is far more enticing.

So maybe Capito should be included in the painting, too, sitting innocently on the windowsill while a curtain blows in the breeze, the short-term future of a political party that’s struggling to adapt. Right on schedule, Trump’s advisor Steve Bannon was revealed on Tuesday to have called the more traditionally right-wing Paul Ryan a profanity that can be found here (this writer was unable to verify those claims). This is a Republican civil war over ideology, class, the Trump personality—and lately the only point of agreement, that Obamacare must go, is the thing they’re least likely to achieve.