Sending Toby Keith to Saudi Arabia Is a Genius Move 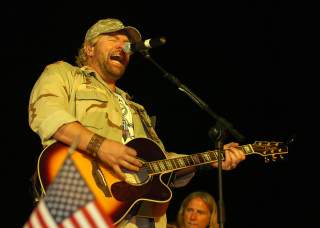 During the Cold War, the U.S. government sent “jazz ambassadors” around the world to burnish America’s reputation with foreign audiences. Hillary Clinton’s tenure at the State Department implemented “hip hop diplomacy” programs in the Arab world. Now, in the age of Donald Trump, the American likeliest to heal strained ties with the Kingdom of Saudi Arabia is—apparently—pop-country star Toby Keith.

The news that Keith would appear in Riyadh Saturday, alongside Saudi singer and oud player Rabeh Saqer, drew plenty of jokes online. Many pointed out that Keith’s repertoire included songs with names like “Beer for My Horses” and “I Love This Bar,” and remarked that tickets would only be made available for male attendees. But more to the point, doesn’t Keith, with his proud red-state persona, seem a strange pick for a crowd of Saudis?

For the record, Keith’s appearance doesn’t seem to have been planned by the U.S. embassy in Riyadh; an events company called Lammt is advertising it in coordination with the entertainment broadcaster MBC. It’s hard not to imagine that it’s deliberately timed to Trump’s visit to Saudi Arabia, whose government is going over the top to honor the president with a flurry of activity. After his tough words about Islam during the 2016 election, the Custodian of the Two Holy Mosques seems eager to reassure him that the two countries’ strategic partnership remains sound, and that there are no hard feelings about his claim that “I think Islam hates us.”

Trump and Keith are a natural fit, to the extent that Keith performed at the inauguration concert in January despite not having supported Trump’s candidacy. “Courtesy of the Red, White and Blue (The Angry American),” released in the wake of the 9/11 attacks, infamously warned Al Qaeda that “you’ll be sorry that you messed with / The U.S. of A / ’Cause we’ll put a boot in your ass / It’s the American way.” Country music, especially Keith’s radio-friendly contemporary kind, has become inextricably linked to the sort of people who are stereotypically associated with Trump’s unlikely success: rural, working-class Americans who may lack exposure to cultures from beyond the United States—and who, in today’s political climate, aren’t always friendly to Arabs or Muslims.

The uncompromising, sometimes-abrasive masculinity that both men embody is an aspect of American culture that the State Department isn’t always eager to showcase abroad. Public-affairs officers in embassies worldwide perhaps recognize the ugly reputation that the United States has in certain places, and so rush to compensate by instead highlighting America’s contributions to ballet, painting and, yes, jazz.

But besides our swaggering president and his salt-of-the-earth supporters, Toby Keith is also reminiscent of something else: the proud, nostalgic, masculine Arab culture of the Gulf. Both the American heartland and the Gulf states are places that revere the wild and  past, when life was simpler and purer—whether cowboys on the sweeping prairies or bedouins who, in some cases, only settled down a few decades ago. God, the land, the military and traditional family values are inescapable in both. Even Toby Keith’s stars-and-stripes guitar is a direct descendent of the Arab oud that he’ll be sharing a stage with on Saturday. And both cultures feel pulled between the idealized, noble past and the comforts of the present—a tension that’s audible in Keith’s pop-country as well as his Saudi counterpart’s synth-heavy Arab dance music.

If this is how Saudi Arabia pulls out the stops for Trump’s visit, why not? Toby Keith’s Oklahoma, some specifics aside, has an awful lot in common with Saudi Arabia’s Najdi heartland—and certainly can speak more to a conservative audience in Riyadh than a ballet dancer from New York City. If Keith plays his cards right, this could be a public-diplomacy opportunity that the State Department gets for free.