Serbia Is Sitting at the Great-Powers Crossroads 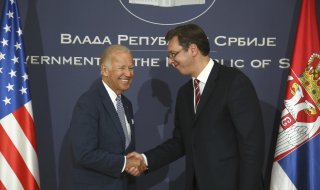 Serbia has been here before. In ancient times, the Western Balkans sat astride the dividing line between the Roman Empire and the infinite frontier to the East. Later, the region marked the point of converging interests for Imperial Russia and the Austro-Hungarian and Ottoman Empire.

But sitting at the crossroads on great powers doesn’t necessarily make you the doormat of great powers. On the contrary, it can set you up for peace and prosperity.

Today, Serbia has a unique opportunity for a strategic reset that could set the country and the region on course for a better future. The road starts with making space for Kosovo statehood.

When the Past Could be Prologue

There is a lot more to Dubrovnik than stunning scenery for Game of Thrones. In the eighteenth century, the small city-state (in present-day Croatia), almost entirely surrounded by Ottoman territory, managed to maintain its liberty and thrive. It was a major port of call and business hub, not just for Istanbul, but for many European powers—even reaching out to establish trade relations with the newly established American Republic. All these powers found it served their interests best to allow the place where their interests comingled to flourish. The fathers of Dubrovnik made themselves valuable to everyone.

In building a Europe whole, free and at peace, the Western Balkans are definitely unfinished business. There is scant regional integration. While Slovenia and Croatia are members of the European Union, others’ prospects for accession appear remote. The potential for conflict remains. Transnational crime and corruption are a problem. Russia continues its perpetual meddling in the region, and China is looking to exert more influence there.

Yet the heart of the region’s disunity lies primarily in the tension between Serbia and Kosovo, which obtained its independence in 2008. Serbian foreign policy actively continues to press nations not to recognize Kosovo and constantly seeks to block Kosovo’s participation in international organizations. Resolving differences with Kosovo could be the key to Serbia’s emergence as an important force in regional development and stability.

Traditionally, Serbia has leaned heavily on relations with Russia and China, even though it receives far more investment and assistance from the West. Yet, as allies, both Moscow and Beijing have underperformed. Both take Serbia for granted.

Serbia diminishes its own value by not deepening its ties with the West to balance out its relationship with these unappreciative powers. This is not about picking sides. This is about making Serbia a more valuable and responsible regional player, and, in turn, emerging as a more positive force in balancing the interests of great powers in the region.

The quickest and most productive path for Serbia to balance its relations with the West is to normalize relations with Kosovo. No step would be more constructive.

Hats off to both the United States and the European Union for committing to broker a future rapprochement between Serbia and Kosovo. If this core issue can be resolved, then it could transform the future of the Western Balkans.

As for Kosovo, its future clearly lies with full integration with the transatlantic community. Kosovo knows it, and Serbia is wasting its time and resources if it thinks Kosovo would ever leave that path. While Kosovo should seek to keep the dialogue with Serbia open and constructive, it needs to continue to look for ways to keep moving forward.

It has already taken the shrewd decision to start developing its national military so eventually, it will be qualified for NATO membership. Meanwhile, the nation should look for creative ways to work with NATO.

Creativity is essential, as some of the more obvious cooperative overtures are not possible.  Participating with the allies in Afghanistan, for example, might seem to be a natural move. After all, this is a pivotal moment for Afghanistan, and additional international support now would be valued and welcome. Moreover, sending even a small contingent would enable Kosovo to broaden and deepen its military experience.

The hitch, of course, is that five European countries—Spain, Slovakia, Cyprus, Romania, and Greece—do not recognize Kosovo. All except Cypress are in NATO (and Cyprus is in the EU). This is a contributing factor that prevents Kosovo from sending troops to Afghanistan and otherwise complicates its transatlantic path.

Kosovo should also continue to seek ways to develop a more secure and clean energy supply integrated into a more robust and resilient regional energy architecture. One option, for example, is to develop the proposed Albania-Kosovo Gas Pipeline, which would connect Kosovo to the Albanian section of the Trans-Adriatic Pipeline, itself part of the Southern Gas Corridor that brings gas from the Caspian to Italy and then on to the rest of Europe.

The Three Seas Initiative (3SI) also presents Kosovo with opportunity. It should enter into a dialogue with 3SI nations to explore partnering opportunities, particularly in the space of digital infrastructure.

In short, today’s great-power competition need not work to the detriment of the Western Balkans. On the contrary, it gives both Serbia and Kosovo an opportunity to bring greater peace and prosperity to the region.

In the end, the Western Balkans becomes an area of cooperation rather than competition by demonstrating its value to all sides. There is an imperative right now for both countries to strengthen relations with the West, and the most impactful path forward is to realize the future is two nations living side by side in peace and mutual recognition.