Serbian President Aleksandar Vucic Is Navigating a Highway to Uncertainty 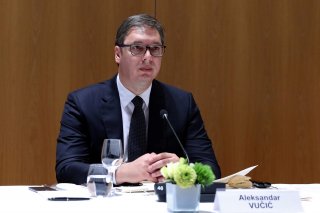 As some pundits work hard to undermine the prospect of a comprehensive, multidimensional agreement between Serbia and Kosovo, one that can have democratic validation in both capitals,  an extraordinary development has been unfolding in the Balkans—the Serbia of 2020, under the leadership of President Aleksandar Vucic, incentivized by the smart policies of the White House, State Department and Pentagon, wants to reestablish a strategic partnership with the United States.

This was evident during Vucic’s visit to Washington in early March, which is when he spoke at the AIPAC Policy Conference, backed U.S. peace efforts in the Middle East, and gave an extensive interview to Foreign Policy in which he said Serbia was “profoundly grateful” to the U.S. Serbia’s efforts to move closer to the United States is a trend that can be easily spotted, if one wants to, simply by watching morning political programs on Serbian TV stations or glancing at the front pages of Serbia’s leading pro-government dailies, which are now drawing more and more attention to engagement between Serbia and the United States.

Other signs are abundant. Vucic supported a vital compromise among all actors in Bosnia and Herzegovina on forming a new government and adopting a reform program for the armed forces in cooperation with NATO. He and Albania’s prime minister, Edi Rama, have engaged in a historic rapprochement between the two nations. Serbia is implementing the second cycle of its Individual Partnership Action Plan with NATO and strengthening engagement with NATO’s eastern flank members. Earlier this month, U.S. Navy Seals trained and conducted exercises with their Serbian counterparts outside of Belgrade. Serbia has regular, peaceful gay pride parades led by senior government officials and Vucic refers frequently to Serbia’s need to acknowledge and not repeat mistakes from the past, to mention just some of the many positive developments happening in Serbia.

Meanwhile, Serbia is heeding U.S. warnings about Russian weapons purchases, and Vucic has committed to diversifying the country’s arms suppliers to include the United States and one of America’s closest allies, Israel. Despite growing Russian pressure and hybrid operations in Serbia, Belgrade refused to grant diplomatic status to the so-called Serbian-Russian Humanitarian Center in the southern Serbian city of Nis.

And why is Serbia striving to pivot towards the United States? Part of the reason is undoubtedly to convince Washington to help mediate an equitable, politically feasible, and sustainable solution to the dispute between Serbia and Kosovo. Moreover, the Serbia of 2020 wants and deserves to be treated as such, rather than being perpetually regarded as the Serbia of 1999, which, unfortunately, continues to be the case in Kosovo and some quarters of the West, especially among those who have worked on the Balkans since the 1990s and seem to be stuck in this decade when it comes to their policy recommendations.

Under the pretext of multiculturalism, these individuals are against any multidimensional, comprehensive agreement between Pristina and Belgrade that may include adjustments to the administrative line, failing or refusing to recognize that such an agreement would anchor Serbia with the political West. Their opposition to mutually agreed adjustments to the administrative line is founded on the argument that this sort of settlement would reduce the Serbian minority in Kosovo to those who live south of the Ibar river, causing them to flee Kosovo. But Kosovo’s Serbian minority largely stayed put even after the large-scale violence directed against it in 2004, which resulted in the deaths of Serbs and the destruction of dozens of Serbian Orthodox churches. If these events did not trigger mass exodus, then why would a mutually acceptable peace agreement with likely security guarantees and institutional links between Serbs in the north of Kosovo and Serbian enclaves to the south?

Following such a settlement, both Serbia and Kosovo would remain multiethnic. In Serbia alone there are more than twenty national minority councils that deal with language and cultural issues, organizing regular elections for their institutions. The small part of Kosovo territory—roughly 10 percent—that may be one element of a comprehensive settlement is also interesting to both sides because of the resources that exist there, including the Trepca mine and Gazivode water supply system. Kosovo’s unilateral declaration of independence in 2008 was classified as a “unique case” among those who supported the move. If the Kosovo-Serbia dispute was a unique case, then it remains a unique case today, one that demands a unique solution, which can and should include the joint management of resources in a way that compels Serbia and Kosovo to cooperate moving forward.

Additionally, one out of three small municipalities in northern Kosovo that could be part of an agreement, Leposavic, is home to a KFOR peacekeeping base. In case of a deal under UN Security Council Resolution 1244, which authorized the NATO-led mission in Kosovo in 1999 and remains in effect today, part of the KFOR troops would remain stationed on the territory controlled by Belgrade. Their presence would serve to deter the malign influence of Russia and other non-democratic actors in Serbia while allowing Serbia to remain militarily neutral if it chooses.

According to the State Department’s Special Envoy for the Balkans, Matthew Palmer, any deal needs to be “sellable” to the public in both Serbia and Kosovo. In Serbia, however, polls show that no more than one-third of the population backs a multidimensional and comprehensive compromise agreement. For Vucic, this needle is incredibly difficult to thread, especially in the face of Russia’s aggressive hybrid operations in Serbia, which are seldom discussed. Part of the reason for this is that Vucic cannot openly describe and identify Russia’s activities for what they are. This would cause the Kremlin to even more forcefully activate its surrogates and propaganda machinery in Serbia against him, further peddling the narrative that Vucic is a traitor for seeking a compromise over Kosovo.

Sadly, in addition to the church, the political elites in Kosovo and those individuals in the West who are striving to delegitimize the Special Presidential Envoy for peace talks between Serbia and Kosovo, Amb. Richard Grenell, and current U.S. efforts to find a permanent compromise are also helping Russia pursue its disruptive objectives, namely, to maintain the status quo. This is what the Kremlin seeks most of all. The status quo, which gives Russia vastly more leverage and influence than it would otherwise have, allows Moscow to keep blackmailing Vucic over Kosovo, preventing him from criticizing Moscow and removing the only real wedge that exists between Serbia and the United States.

Vucic has the authority, popular support, and determination to reach a comprehensive and multidimensional agreement between Serbia and Kosovo. Unfortunately, the same cannot be said of the political opposition in Serbia. Most of these figures have much closer ties to Russia and the Serbian Orthodox Church than Vucic, and Moscow would prefer to see them in power, in part because they are categorically against any feasible agreement between Serbia and Kosovo. For the Kremlin, they are a far better guarantee of the status quo compared to Vucic, who pays lip service to Serbia’s relationship with Russia but is at the same time striving to solve Kosovo, which would deprive Russia of its influence and leverage over Serbia.

To their immense credit, Grenell and his colleagues seem to understand all this. It is clear that they do not want to lose this fleeting opportunity to at once settle one of the most intractable disputes in the world, revive America’s alliance with Serbia, and purge Russia’s disruptive presence from the Balkans.

Jelena Milic is the director of the Center for Euro-Atlantic Studies in Belgrade, Serbia.