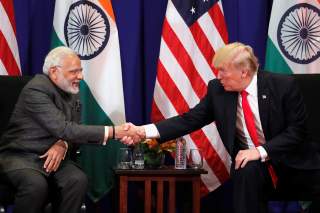 In America, the word “alliance” conjures feelings of friendship, loyalty and support. In India, by contrast, the A-word is more likely to be received with suspicion or derision, associated with submission and entanglement. This stark difference between the world’s oldest and largest democracies is a legacy of India’s influential post-independence philosophy of nonalignment, which cautioned against dependency on superpowers. While its appeal has diminished since the end of the Cold War, existing proponents of nonalignment continue to shape India’s geopolitical maturation, not least through the perpetuation of several myths and misconceptions about the costs of “alignment” with the United States.

From Nonalignment to Non-American

Oft-derided today, for India the Cold War logic of nonalignment was arguably more compelling—at least more flexible and pragmatic—than it’s remembered for. Facing profound developmental challenges following independence in 1947 and an intractable rivalry with Pakistan, India was determined to maintain working relationships with both the United States and USSR, even as it had philosophical and policy disagreements with both. It saw alignment with either power as fraught with danger: as the junior partner it feared becoming ensnared in its patron’s rivalries and assuming their enemies as its own.

India did its best to remain aloof from Cold War rivalries as a leader of the Non-Aligned Movement until practical realities forced its hand, which they often did. India accepted U.S. military aid when China launched an offensive across the disputed Sino–Indian border in 1962 and signed a mutual defense treaty with the USSR shortly after America signaled an opening to China in 1971. Even then, India jealously guarded its autonomy. It welcomed discounted arms deals from Moscow and geopolitical cover at the United Nations Security Council while largely avoiding entanglement in the USSR’s ideological and military struggles.

Nonalignment outlasted the Cold War, albeit in a weakening state. Since the turn of the century, it has gradually given way to a more flexible conception of “strategic autonomy” as India has taken several meaningful steps toward alignment the United States and Japan, and more robust strategic engagement with a host of others.

Yet, the ghosts of nonalignment still stalk the halls of South Block, erecting bureaucratic roadblocks and conjuring contentious debate over every self-interested shift in America’s direction. And make no mistake: in its current form, nonalignment is very much a non-American faith. There’s nary a peep from its acolytes when India signs defense agreements with Russia, conducts military exercises with Japan, buys arms from Israel or trains Vietnamese soldiers. Once based on pragmatic considerations, their cause has become a more visceral, sometimes irrational, impulse—one fueled by the perpetuation of several hollow myths.

Myth Number One: Allying with the United States Is a Dangerous and Costly Proposition

For the nonalignment crowd, an alliance with America is akin to a pact with the devil, one lined with costly obligations and emasculating dependency. At every turn they’ve argued that if India were to do X with the United States—sign a civil nuclear deal, purchase U.S. arms, sign a foundational military agreement—it would be reduced to an American lapdog, ceding its sovereignty and agency to Washington politicians. And in every case, their ironclad predictions proved comically wrong.

So, I ask them: What great costs has India borne from its growing partnership with the United States? What, exactly, has India been forced to do against its will and interests as a result of its maturing partnership with the United States? What unholy burden has offset the significant advantages India has gained from advanced military hardware and expertise, international support for its nuclear status, cyber and counterterrorism cooperation, and intelligence-sharing arrangements—all of which have been praised by the Indian security establishment?

Any country willing to ally with the United States, the nonalignment crowd insists, will be forced to follow American dictates and be drawn into American conflicts. Is that true?

The president of Turkey, a U.S. treaty ally, issues anti-American screeds on an almost weekly basis and has consistently opposed Washington on key regional fault lines, largely free from retribution. U.S. allies frequently and vibrantly break with Washington when they see it is in their national interests to do so, whether it’s over support for Israel and Taiwan, the Iraq war or America’s Iran policy.

Yes, but what about the sanctions? At the moment, India is potentially under threat from two sets of U.S. sanctions: one designed to punish those doing business with Russia’s military and intelligence establishment; the other targeting those purchasing oil from Iran. Isn’t this proof that getting too close to the United States carries risk? Not really.

India has good reason to feel slighted: through no fault of its own, it is being asked to make costly adjustments to its economic policies and foreign relationships. However, this is not a function of India's proximity to the United States—quite the opposite. Both sets of sanctions apply to friend and foe alike. If anything, they underscore the importance of India’s growing partnership with the United States, which has created domestic constituencies committed to securing India’s preferential treatment and shielding it from dual sanctions.

Myth Number Three: Everything America Does is to Serve its Own Interests

Less a myth than a misdirection, for the nonalignment crowd one argument rules them all: America is not magnanimous—everything it does is meant to advance own national interests.

Yeah, so what? What foreign policy initiatives does India pursue that aren’t in the country’s interests? It’s precisely because the United States and India have an unusual alignment of national interests that they have the space to pursue meaningful, mutually beneficial cooperation in so many arenas.

Myth Number Four: Being too Pro-American is Political Suicide

Perhaps the most perplexing myth on the list, long ago the nonalignment crowd convinced Indian politicians that public expressions of pro-Americanism carry great political risk. Okay, where's the evidence? When has painting a political opponent as pro-American proven a successful electoral strategy? Did it harm Prime Minister Narendra Modi when he hailed the United States as a “natural ally” on the campaign trail?

Polling data by Pew is consistent: the Indian public views the United States more positively than almost any other country, including old friends like Russia and new ones like Japan. Fewer Indians hold unfavorable views of the United States than any other Indo-Pacific public polled by Pew. Perhaps Indian politicians have become less threatened by the electoral implications of pro-Americanism than invoking the ire of graying television pundits charging consulting fees to foreign capitals.

Arguably their most effective myth, the nonalignment crowd has long held that alignment with the United States risks provoking rivalry and conflict with China. While there’s an intuitive logic to the assertion, knowledgeable experts and policy practitioners have long recognized the opposite is true: India’s growing partnership with America has strengthened its hand vis-à-vis China.

First, nothing in contemporary Chinese history suggests it would be more deferential to Indian interests if Delhi had fewer, or fewer influential, friends. Second, the main fault lines in the China–India relationship derive from long standing bilateral irritants and conflicts of national interest. Several legacy disputes—China’s support for Pakistan, an enduring border dispute and differences over Tibet and the Dalai Lama—predate the U.S.–India partnership. Meanwhile, the United States is a non-factor in the principal new fault line in bilateral relations: China’s growing military, political and economic presence in the Indian Ocean and South Asia.

Some in Beijing are indeed unsettled by India’s growing partnership with the United States. Yet rarely has China sought to impose direct costs on India in response, likely fearful such a move would backfire and provide additional ammunition to Chinese critics and U.S. advocates in Delhi. In that sense, Beijing is stuck in a Catch-22.

Myth Number Six: America Takes Everything and Gives Nothing

The nonalignment crowd insists that an imperious United States extracts concession after concession from India, offering Delhi little to show in return. Is that true? Has America not carved out more country-specific exemptions for India across more levels of government and separate issue sets than it has for any country in recent history?

The United States has granted India unique status as a “Major Defense Partner” and delivered advanced military platforms to Delhi before other treaty allies. It has supported a role for India as a permanent member of the UN Security Council and undertook the daunting task of re-wiring a decades-old international nuclear order to make India an accepted member of the club—the only non-signatory to the Nuclear Non-Proliferation Treaty to ever make the leap. What great bounty did Washington extract for this Herculean task? From a transactional perspective, nothing. And that’s okay.

With India, America is doing something well that it has traditionally done very poorly: playing the long game. The U.S. government genuinely believes India’s rise is an inherently positive development: a good thing for regional security and stability; a good thing for democratic governance; a good thing for U.S. interests in the region; and a good thing for the regional balance of power. The recognition of these long-term, sometimes indirect and intangible benefits frees Washington from the need to extract transactional benefits from every interaction with Delhi.