Sex, Seduction, and Myth in The Latinist 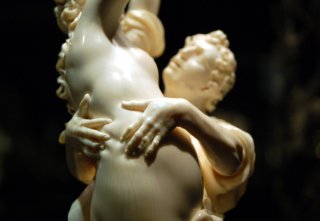 IN HER celebrated essay, “On Not Knowing Greek,” Virginia Woolf has nothing to say about ignorance of the language. She faults no one for failing to master it as she obviously has done. Her tactic above all is to present telling citations of the Attic tragedians in their linguistic authenticity. What better way to show how inadequate translations are than to forgo them?

In his debut novel, The Latinist, Mark Prins aims at a similar goal of whetting the reader’s appetite in a less paradoxical way for getting a handle on Latin. It’s no accident that the Latinist of his title, a young American named Tessa Templeton, should make an astonishing, pathbreaking discovery about a hitherto utterly obscure Roman poet, Marius—invented by Prins—in an Italian graveyard: these bones shall rise again might be her motto. Tessa, transplanted from the boonies of Florida to the august environs of an Oxford college brings to new life as well one of Ovid’s stories of transformation: Apollo’s stymied pursuit of Daphne, as she herself is pursued by her academic supervisor, Chris Eccles. Where Ovid, on Tessa’s interpretation, was “silenced” through the god’s implacable force, she is not. Prins has constructed a thrilling tale of personal transformation, a coming of age romance, anchored in the details of research into Roman poetry. The novel turns out to be a very original variation of the well-worn Jamesian theme of the American girl adrift in European waters alive with crafty seducers. For all the differences, she is more than a little evocative of Daisy Miller, “an inscrutable combination of audacity and innocence.”

IN HIS use of Ovid, Prins has distinguished models. That Shakespeare drew on the Pyramus and Thisbe tragicomic segment of the Metamorphoses for the version performed by the “rude mechanicals” of A Midsummer Night’s Dream is common knowledge. Less obvious is an allusion in the play to Daphne and Apollo at the moment that Puck transforms the lovers’ souls from love to hatred. An abused Helena cries:

The wildest hath not such a heart as you,
Run when you will; the story shall be changed:
Apollo flies and Daphne holds the chase;
The dove pursues the griffin, the mild hind
Makes speed to catch the tiger…

Shakespeare could assume an audience familiar with Ovid’s version, in which Daphne “flies” from a chasing Apollo, and perhaps with Ovid’s simile of hounds closing in on a hare which Helena evokes. More generally, the transformations brought on by Puck’s interventions might be seen as a tribute to Ovid’s art of metamorphosis.

Closer to our times comes Keat’s “Ode on a Grecian Urn,” indisputably in debt to the unchanged version of Apollo and Daphne. The unnamed beholder of the urn poses to the figure on it, identified as “a still unravished bride of quietness,” a series of questions: What men or gods are these?/What maidens loth?/What mad pursuit? What struggle to escape?” It amounts to statements in the form of questions. Anahid Nersessian has convincingly traced them back to Ovid’s Metamorphoses. She notes how many of Ovid’s stories “turn on chase scenes exactly like the ones Keat’s describes, in which a maiden loth is pursued by a determined man … Apollo breathes down Daphne’s neck like a greyhound nipping at the heels of a hare.” Each of these stories ends with a transformation of the pursued female; the male goes unpunished. In the novel, Tessa counters, or amends, Ovid by interpreting the transformation, Daphne’s into the laurel tree, as an act of censorship or arrested development which ought to earn defiance, just as she defies Chris’ attempt to reduce her to silence.

Where, however reprehensibly, Apollo acted in the open, Chris, it must be said, acts through subterfuge. He sabotages Tessa’s efforts to land a teaching job by penning a recommendation that damns with faint praise, after promising a glowing one. He wants to keep her under this thumb by arranging a modest appointment for her as a teaching assistant. Like another famous Ovidian character, Pygmalion, he’s in love with a creature of his creation, or so he believes. Desperate to maintain a favorable view of his own lubricious motives, he tries to persuade Tessa, and himself, that he has nothing in mind but her happiness and success. If she stays at Westfaling, his college, she can hit the big time by finishing her book on Ovid which, through his connections, will be published by Oxford University Press. He cannot grasp that Tessa’s discovery of the damaging recommendation letter has poisoned any chance he might have had of retaining her.

A SUBPLOT, puzzling at first, deals at length with Chris’ efforts to assist a dying mother who may in part be responsible for his habitual resorting to deception. His mother, on her deathbed, retaining sparks of mental acuity, observes that “he’s a sly one.” How did slyness get to pervade him? Faced with being beaten by her with a rolling pin, he took to extravagant lying to plead innocence. Or was he being punished for the lies he was already telling? Intersecting this narrative are the mother’s sheep which Chris is obliged to feed in his mother’s absence, something he does with loving care. With them he gets along better, in fact, than he does with human beings.

Prins repeatedly has Tessa in her discussion of Ovid insist that Apollo’s “love,” “amor,” is “ironic.” It’s too bad that he never has her justify, or even explain what she means. She comes close in observing that the love of her ex-boyfriend Ben, and that of Chris, had “shortcomings.” But that is very different from irony. You might argue that true love entails desiring the good of the beloved, which Apollo, lusting after Daphne’s body, decidedly does not. However defective that may be, there is not the gap between reality and appearance that is a concomitant of irony. Perhaps Prins wants to have her sound sophisticated, “ironic” being a frequent maneuver of literary critics, or is himself being ironic.

Whether or not irony enters into Ovid’s depiction of Apollo’s desire, it certainly possesses an overall comic complexion. It begins with Venus’ son Cupid boasting that his archery outdoes that of Apollo, who has been boasting of his overcoming Python. Cupid asserts that with his arrows he can do much better to the point of showing Apollo himself powerless against them. The serious assertion here, as Vittorio Hösle has noted, is that eros is universal; nobody is exempt, not even a vainglorious Apollo, soon to preside over the Delphic oracle. But the storyline in which this is embedded is light-hearted, making it hard to credit that the intensification of desire could be termed beautiful without the irony of the high schooler Tessa growing enamored of Ovid, and Latin, during a “mystical experience” undergone while reading of this attempted, and frustrated rape. Here, too, Prins offers no explication. Perhaps one lurks in the following: “She thought of the passage … Tragic, maybe, but in a manner of high drama, where Ovid’s gymnastic handling of desire could be termed beautiful without irony, a passage of such spherical density that the first sparks of herself had materialized around it.” A bit later comes “how that first encounter with Daphne and Apollo had struck her at the core, made a claim on her, raised her hairs on end, and dragged her soul, just for a moment, out of her body.”

Here is the curse of fine writing, of vaporous sentimentality. It’s untypical of an author perfectly capable of precise, unpretentious prose. Take the stunning opening of the novel, in which a cigarette stub tossed down and polluting a pristine Oxford lawn tells all we need to know about the thrower. Everything that follows unfolds from that willfully careless act. Or the exciting Rededuell where Chris seems to have crushed Tessa into subservience only to have her come from behind to deliver a knockout blow, not to mention her later deployment of an Apollo-Daphne paperweight.

OVID’S NARRATIVE has a political dimension that Prins might have touched on. In 8 AD, with the Metamorphoses close to completion, Ovid found himself exiled by order of the princeps, the “leading citizen,” Augustus. Among other crimes, he had fostered immorality with an earlier work, the Ars Amatoria, or Art of Love, providing advice in the form of a technical handbook (here irony does enter) for guys looking to pick up girls, and girls on the hunt for men. Augustus, seeking to make Rome great again after an era of ferocious civil strife, was especially keen on stamping out adultery in the upper classes on whom he relied for reconstituting republican virtue. Ovid, perfectly aware of danger, repeatedly claims in the Ars that none of his advice could be construed to seduce married women into nefarious ways. He knew that he was treading on rather thin ice.

How might Apollo and Daphne embroil him with the princeps? Augustus was principally concerned with the conduct of married women, and Daphne was a virgin and so fair game. But Apollo might be a problem. As it happens, he was adopted by Augustus as his personal deity, to whom he looked as a savior, as the divine power who had decisively intervened on his behalf at Actium in defeating Antony and Cleopatra. Virgil’s portrayal of the scene on the shield of Aeneas is unforgettable—how distant from the lascivious Apollo of Ovid! How would Virgil’s successor safely depict Apollo as a would-be rapist, inflamed at the sight of a pretty girl who wants nothing to do with men? The comedic ambience is part of the solution. Another lies in the metamorphosis itself: the branches of the tree will adorn the doorposts of Augustus’ house, confirming him as the triumphator, the commander who has triumphed over Rome’s enemies. One strange feature in the story is that Apollo is not in the least discomfited by his failure to possess Daphne. But why should he be? He has traded transient sexual delight for the lasting pleasure of supporting the rule of Augustus.