Shale Shock: How to Use America's Energy Market as a Foreign Policy Tool 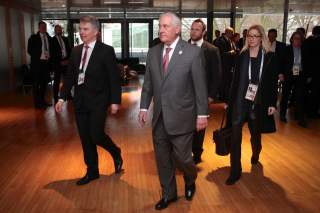 The Senate confirmation of former Texas governor Rick Perry as secretary of energy, coupled with the earlier appointment of Exxon Mobil’s former CEO, Rex Tillerson, as secretary of state, comes at a time when the United States has emerged as an energy superpower: a leading global producer of oil and gas. President Donald Trump’s administration now has the ability to harness the country’s energy prowess for domestic economic benefits and achieve meaningful foreign policy gains for the country.

In theory, Tillerson’s experience with the global energy markets should be a considerable asset in effecting exactly these goals. Likewise, Perry’s knowledge of the American energy sector as the former governor of Texas will be a useful asset in helping enact America’s energy policy, even if the Department of Energy is largely tasked with overseeing the nation’s arsenal of nuclear weapons.

However, with “America First” as the guiding foreign-policy principle and the announcement of an “America First” energy plan, will the Trump administration be willing to lead globally and leverage the diplomatic potential of the country’s energy to benefit America and its allies? Will the administration be willing to take on a bold new energy diplomacy strategy that could rein in its rivals and foes?

The global energy markets and America’s domestic energy standing are already radically different from when President Barack Obama took office in 2009. Following a tightly contested competition, which began in the 1980s, the United States managed to surpass Russia as the world’s largest producer of natural gas by 2011. Even more surprising is that the United States became the world’s leading oil producer in 2014.

This dominant position in the global energy industry did not come overnight. The new energy reality reflects broader global changes—changes which are most evident in the transformation of the natural gas markets.

Since the mid-2000s the North American shale revolution unlocked the development of previously untenable unconventional oil and gas resources. It helped boost U.S. domestic natural gas production by more than a third, reaching an estimated 28 trillion cubic feet annually in 2016. Over the last sixteen years, shale gas has grown. It used to account for barely 1 percent of total U.S. natural gas production. Now, it accounts for more than 50 percent.

Furthermore, growing liquefied natural gas (LNG) trade and the buildup of gas transport infrastructure worldwide facilitated the development of an increasingly global gas market. While gas was previously a politicized regional resource dependent on land-based pipelines for transport, it has increasingly become a more liquid commodity that could be shipped across the globe in the form of LNG. As the number of LNG importing and exporting states increased, global LNG trade reached an all-time high of 270 million tons in 2015 and final 2016 volumes are expected to be even greater.

Most significantly, with U.S. gas production booming, American LNG exports extended to the far reaches of the globe in 2016. Those exports were sent to Brazil, India, Kuwait, Spain, China, Mexico and other destinations. This was in stark contrast to the 2000s when U.S. policy experts and energy companies worried about America’s energy security and geared up for gas imports. The country’s shale production and exports performed well, even in the low-energy price environment of the past few years. Looking forward, there are dozens more LNG export projects in the making and awaiting the approval of governmental agencies.

The rapidly changing tides of natural gas markets have been transforming the geopolitics of energy. The balance of power between former monopolist suppliers, such as Russia, and importing countries, such as the European states, is shifting to favor the latter. The United States will accrue many benefits as it will meet its own energy demand and have greater capacity to export its gas to energy vulnerable allies in the European Union, which will help them diversify away from Russian gas. Yet with Trump’s hopes of improving relations with Putin, it is uncertain if undermining Russian gas giant Gazprom or promoting European energy security would be priorities for the new administration. Additionally, competition between American and Russian energy interests could help unravel hopes of a U.S.-Russia rapprochement.

At the same time in the Asian markets the U.S. position is not yet cemented while American LNG deliveries are highly anticipated. For instance, Trump withdrew the United States from negotiations for the Trans-Pacific Partnership, a twelve-nation free-trade pact that would have fast-tracked American LNG exports to some Asian markets, particularly the Japanese market.

So what does all this mean for the United States and its new foreign policy?

Tillerson noted during his Senate hearing, “America still holds all the aces—we just need to draw them out of that deck.” If the Trump administration and the two Texans, Tillerson and Perry, play the energy card right, then the United States can reduce the vulnerabilities of its European allies, co-opt its rivals like China and rein in its adversaries like Russia—all while benefiting its own producers. For that to happen, however, the United States must solidify its position as the leading player in the global energy markets and promote open, secure and transparent flows of natural gas.

The Trump administration and the Department of Energy should embrace the country’s newfound energy prowess to take advantage of the important role natural gas and LNG will play in the coming decades and look to the far future. In time, the role of nonfossil energy sources will rise, driven by markets, technology and climate change, and again the United States will have every opportunity to emerge as the global leader. This approach would leverage economic and political gains for the nation during the term of the new administration and in the years to come.

Agnia Grigas, senior fellow at the Atlantic Council, is the author of The New Geopolitics of Natural Gas and Beyond Crimea: The New Russian Empire. Follow her @AgniaGrigas and Grigas.net.