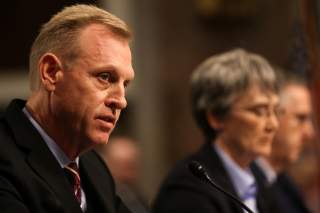 Acting Defense Secretary Patrick Shanahan will deliver a major address on the Department of Defense’s Indo-Pacific strategy at the Shangri-La Dialogue in Singapore on Saturday. The annual dialogue, hosted by the International Institute for Strategic Studies, is Asia’s premier security forum and is attended by senior officials and opinion leaders from dozens of countries. This is an important chance for Shanahan—a former business executive who spent two years as the Deputy Defense Secretary focusing on internal management issues—to build connections with regional counterparts and demonstrate his competence in Asian security affairs. This will help as he prepares to lead the department on a permanent basis as the president’s nominee to replace former Defense Secretary James Mattis.

The path of least resistance for Shanahan would be to explain the Trump administration’s vision for a “free and open” Indo-Pacific region and reaffirm the importance of U.S. alliances and partnerships, much as Secretary Mattis did at last year’s dialogue. He might also provide new details on how the department is implementing the strategy in areas such as the evolving U.S.-India defense cooperation or the cultivation of new security partnerships with smaller Pacific Island and South Asian countries. This kind of “vanilla” rhetoric would stir no controversy but might also be easily forgettable.

A riskier but potentially more fruitful approach would be to reinforce the U.S. critique of China as a regional challenge. On his first day as Acting Defense Secretary, Shanahan reportedly said that the department’s focus should be on “China, China, China.”  In Senate testimony in March, he fleshed out his view that the Chinese Communist Party “exports coercive influence far beyond its borders while internally wielding authoritarian governance over its own people.” His Shangri-La speech is a chance to explain his thinking to a broad regional audience, including some who may be concerned about overheated U.S. rhetoric. This would help justify the administration’s strategy and keep China, whose defense minister, Wei Fenghe, is likely to use his own remarks at the forum to critique U.S. policy, on the defensive.

To be effective, Shanahan does not need to recount the full panoply of concerns about Chinese behavior, such as its forced technology transfers and overseas influence operations. These arguments have already been made on various occasions by senior U.S. officials, including President Donald Trump and Vice President Pence, and often center on China’s relations with the United States and other advanced industrial democracies. Rather, he should connect with the Shangri-La audience, which will include representatives from many smaller and less developed Asian countries, about the particular challenges that China poses to weaker and more vulnerable states.

Recent Chinese actions provide the basis of a substantive critique that could be aired during the dialogue. One point is that Beijing’s intimidation of vulnerable populations starts at home. Describing China’s internment of up to two million Uighurs in what U.S. officials have called “concentration camps,” but which Beijing cynically refers to as “vocational training facilities,” would bring attention to the regime’s willingness to use any means available to repress opponents, regardless of the costs to China’s international reputation. As discussed in the department’s 2019 China Military Power Report, China has also reorganized its premier paramilitary service—the People’s Armed Police—to more effectively maintain social control in western China and protect the regime.

At a regional level, China’s role in “maritime gray zone coercion” has been well documented in recent books and think tank reports. While Beijing should be given some credit for avoiding escalatory incidents over the last year, one concern is the growing coordination between China’s three maritime services—the navy, Coast Guard, and maritime militia—in enforcing territorial claims in the South and East China seas, which blurs the distinction between military and law enforcement activities and increases risks for smaller claimants. Other concerns include China’s deployment of anti-ship cruise missiles and other weapons systems in the Spratly Islands despite Xi Jinping’s 2015 Rose Garden pledge not to militarize the islands, and Beijing’s lobbying for veto power over ASEAN states’ participation in joint military exercises with the United States as part of negotiations over a South China Sea Code of Conduct. All of this raises the specter of continued Chinese bullying in the Asian littorals.

Recent Chinese actions towards Taiwan might also be raised as an example of how it treats an unrepentant adversary. This includes a campaign to strip Taipei of its last remaining diplomatic partners, provocative exercises and bomber flights around the island, and a recent case of Chinese fighters violating the midline of the Taiwan Strait. The 2019 China Military Power Report documents additional concerns about China’s military modernization, including a reorganization and expansion of China’s amphibious and airborne capabilities that could be used to intimidate Taiwanese voters ahead of next year’s elections.

Just as concerning is China’s horizontal escalation in regional disputes, which has resulted in harm to private citizens and companies. Discussions at Shangri-La could allude to a number of well-known cases, including China’s banning of rare earth mineral exports to Japan in 2010, restrictions on Filipino and Taiwanese agricultural imports, retaliation against South Korean companies operating in China amid Seoul’s deployment of a U.S. theater missile defense system in 2017, or the detention of two Canadian nationals over the recent Huawei case. A less well-known but equally illustrative case is Beijing’s suspension of water data sharing to India during the 2017 Doklam dispute, which reduced India’s ability to forecast floods. The point is that China has demonstrated a willingness to impose costs on civilians who may have nothing to do with interstate squabbles.

A related problem is China’s exploitation of developing states as part of Xi’s Belt and Road Initiative. While the meme of “debt trap diplomacy” has perhaps been overplayed, there are legitimate concerns about China converting economic influence into strategic advantage. Despite earlier denials, China in 2017 opened its first overseas base in Djibouti, which is heavily indebted to China, and last year gained a ninety-nine-year lease of Sri Lanka’s Hambantota port. Economic largesse could also presage a growing Chinese military presence in places like Pakistan and Cambodia. These cases should be of concern to many of the countries that accept Chinese financing for critical infrastructure projects and help explain why the United States is stepping up to offer alternatives.

U.S. perspectives at the Shangri-La Dialogue should not only be clear about the types of Chinese behavior the United States finds objectionable, but also preemptively address how Beijing has been portraying Washington as the “real” provocateur. This argument, which often points to U.S. military operations and presence in Asia’s maritime periphery as the true source of regional tensions, aims to take pressure off China and drive a wedge between the United States and its allies and partners. Wei made this point at the 2018 Xiangshan Forum—China’s own version of the Shangri-La Dialogue—and will likely use his June 2 speech in Singapore to make a similar case.

To counter this argument, Shanahan should be frank about why a strong forward U.S. presence is valuable: It helps secure widely accepted norms, such as freedom of navigation and overflight, and promotes regional stability by reassuring states of U.S. commitments, which is needed against the backdrop of China’s rapid military modernization, expansive territorial claims, and intermittent saber-rattling. He should also specifically address why the United States needs to continue to sell advanced defensive arms to Taiwan, preparing a regional audience for the controversy that will erupt if Washington approves the sale of F-16V fighters to the island.

As in medicine, the first rule of Shangri-La is to do no harm. The risk is that a punchier speech will alienate those who worry about a ratcheting up of U.S.-China tensions and the prospect of being forced to choose sides. Shanahan should thus avoid over-the-top rhetoric and stick to demonstrable facts. To provide a more balanced assessment, he should also identify areas where Washington and Beijing can cooperate, such as in risk reduction and crisis communications. Papering over differences with China, however, would sacrifice an opportunity to explain his previous statements and find common cause with those in the audience—especially from smaller and more vulnerable states—who have their own grievances but might be less willing to voice them for fear of offending Beijing. The best case is that Shanahan comes away as a credible leader who understands regional sensitivities but is not afraid to speak truth to power.

Dr. Joel Wuthnow is a research fellow in the Center for the Study of Chinese Military Affairs at the National Defense University. The views expressed in this piece represent the author’s views and not those of NDU, the Department of Defense, or the U.S. government.