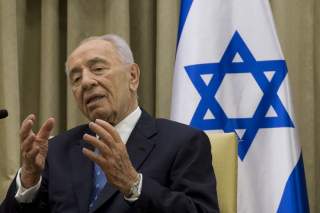 Shimon Peres, who died on Tuesday at the age of ninety-three, was a one-of-a-kind biological and historical phenomenon. After all, other than Peres, can we name a single person who played a major role in the creation of a new state and who some sixty-five years later held what is formally the highest office of the state he helped create—the state’s presidency? Indeed, while rarely if ever are there clearly right or wrong answers in the realms of history and politics, one college exam question about Israel’s history that has only one correct answer is: name two individuals who contributed more than anybody else to Israel’s existence. The correct answer: David Ben-Gurion and Shimon Peres.

Publically, Peres liked to refer to David Ben-Gurion as the grand master and to call himself the student. But in reality, while Ben-Gurion was the grand strategist, Peres was the one who executed: he made it all happen. During Israel’s formative years—the late 1940s, and through the 1950s—Peres built at least three pillars of the grand strategy that Ben-Gurion had designed. He was also in charge of managing the inbuilt tensions between these pillars.

The first of these pillars was self-help: the Jewish state would not rely on others’ good will for its security and survival. And so, as a very young director general of Israel’s Ministry of Defense, and later as its deputy minister, Peres set out to create the country’s armament industry, first the Israel Military Industry (IMI) and later its Israel Aircraft Industry (IAI).

The second pillar of Ben-Gurion’s grand strategy was the pursuit of an alliance with a major power. The first decisive move he made in that direction was to side with the West. Although Israel’s creation was supported by both Truman’s America and Stalin’s Russia, when in 1950 the War in Korea forced Israel to chose sides, Ben-Gurion decided to abandon Israel’s neutrality and to place the two-year-old country squarely in the American-led camp. The decision was costly—it earned Israel decades-long hostility from both the Soviet Union and Communist China.

The second decisive move took place when, by 1954, it became clear that due to its broader regional and global interests, the United States was not yet prepared to become Israel’s primary arms supplier. Assessing that Israel and France shared the same security threat—Egypt’s new president Gamal Abdel Nasser inspired Arab masses with pan-Arab rhetoric centered on hostility to Israel, and with anti-colonial rhetoric that centered on hostility to Britain and France—Israel shifted its pursuit of an external big-power ally from Washington to Paris.

The decision to bet on France was Ben-Gurion’s, but the execution was left entirely to Shimon Peres. Within less than two years, and still in his early thirties, Peres planted all the seeds of a full-fledged military alliance that resulted in the launching of a major war: the 1956 Suez-Sinai War. The alliance lasted more than twelve years, and was only gradually replaced by significant U.S. military assistance after 1970.

A less remembered chapter in Peres’s contribution to Israel’s security and survival was his critical role in an equally important relationship established by Israel during the 1950s: that with West Germany. Barely a decade after the Holocaust, in an effort to avoid becoming an economically failed state, Israel sought reparations from West Germany. This met with huge resistance in Israel—from the far left to the far right—by Holocaust survivors and many others who argued that it was immoral and unethical to accept financial compensation from people who perpetrated the greatest horror ever inflicted on the Jewish people.

For Ben-Gurion, however, the Holocaust imposed a different moral imperative: to prevent such a catastrophe from ever happening again. And the only insurance policy Ben-Gurion saw as effective against the recurrence of such a catastrophe was the existence of a robust Jewish state. And if the latter goal required the acceptance of German financial support, the imperative was well worth surrendering a measure of ethical purity.

Together with Ben-Gurion, Peres launched a major campaign in Israel, arguing that in the aftermath of the Second World War, a “new Germany” has emerged with which Israel must establish close relations. And while Ben-Gurion forged a unique understanding with the new Germany’s leader, Chancellor Konrad Adenauer, it was Peres who built Israel’s relationship with the country’s young guard and particularly with its most conservative elements: the Bavarian section of the Christian Democratic Party led by Franz Josef Strauss. Thus the basis were laid for Germany’s massive financial support of Israel in the form of individual and collective reparations, of its supply to Israel of gas masks on the eve of the 1967 War—when Israel feared Egypt’s possible use of chemical weapons—and of its provision to Israel of Dolphin-type submarines in the aftermath of the 1991 Gulf War. It is these submarines that in the eyes of many now comprise an important dimension of Israel’s strategic deterrence, to which Peres gave birth three decades earlier in Dimona.

And this brings us to the third pillar of Ben-Gurion’s grand strategy that Peres was assigned to implement: deterrence. Very early, Ben-Gurion understood that the numerically inferior Israel could not fight wars indefinitely. War avoidance thus became an imperative, and Israel’s founding father was impressed, years before Bernard Brody, Thomas Schelling, Henry Kissinger and others wrote their important books on nuclear deterrence, that the atom could provide “the few” facing “the many” with a “great equalizer” that could deter war.

The idea was imaginative, but the execution was just as brilliant and much more demanding—and entirely the purview of Shimon Peres. Still in his early thirties, Peres managed to convince France that the alliance with Israel should include the supply of a twenty-six-megawatt nuclear research reactor in Dimona, close to a small development town. Thus, the eight-year-old ministate launched a nuclear project that until then no one other than the great powers would dare to attempt.

To do this, Peres had to overcome the strong opposition of two of Israel’s most formidable power centers—the Ministry of Finance and the IDF—as well as the skepticism of the young country’s small scientific community. The former argued that it was folly for a nearly bankrupt embryonic state to launch a costly project that no other country of Israel’s size would dare. The IDF, then led by senior officers like Yigal Allon and Yitzhak Rabin, who were proponents of conventional offense-defense, argued that in the primitive environment of the Middle East it was fanciful and irresponsible to gamble Israel’s security and survival on as elusive a concept as deterrence. Indeed, even Israel’s very small community of nuclear physicists was initially skeptical about the possibility that a tiny state like Israel could undertake such an ambitious project. How Peres managed to overcome such formidable opposition remains a mystery; it will probably be decades before all the relevant archives will be open to allow even a proximate answer to this question.

While no one besides Ben-Gurion can match Peres’s contribution to Israel’s security, the track record of his later pursuit of peace is nothing short of tragic. Peres’s peacemaking efforts succeeded only once, and that was when he had the full support of an individual that Israelis trusted with their security: Yitzhak Rabin. The Oslo Accords were manufactured in the Peres warehouse—by his loyal and imaginative deputy, Yossi Beilin, and his two academic associates. But the Accords could not win public approval without Rabin.

Tragically, all of Peres’s other peacemaking efforts—before and after Oslo—failed miserably. Indeed, in the mid-1970s, when he served as defense minister in Rabin’s first government (1974–77), Peres contributed to creating the most significant obstacle to Israel’s future peacemaking efforts: he supported ending the taboo against building Israeli settlements in heavily populated Palestinian areas of the West Bank—first by supporting the construction of Ofra, not far from Jerusalem, and later with his visit to Sebastia, then an illegal settlement close to Nablus. Until then, Israeli settlements in the West Bank were confined to sparsely populated areas that were deemed a security imperative by the post-1967 so-called “Allon Plan.”

In the mid-1980s, Peres’s attempt to prevent the need for coming to terms with the Palestinian Liberation Organization by reaching a deal with King Hussein of Jordan—the 1986 London Accords—was crushed by his failure to overcome the resistance of Likud’s leader Prime Minister Yitzhak Shamir. Almost a decade later, after replacing the assassinated Rabin in late 1995, Peres made a crucial mistake in failing to pursue an important follow-up to the Oslo Accords: the Beilin–Abu Mazen agreement reached between then minister of justice Beilin and the Palestinian Authority’s current president, Mahmoud Abbas. Instead, Peres pivoted to the Syrian track but later froze these talks over the Syrians’ refusal to disavow acts of Palestinian terror. He then launched a massive attack on southern Lebanon—Operation Grapes of Wrath—which was aborted when Israeli artillery mistakenly hit a UN compound near the village of Qana, resulting in over a hundred deaths.

Peres’s failures in peacemaking were also associated with his electoral failures. Because, from the early days of the state, Peres belonged to the civilian side of its defense community and not to its military, he was never perceived as “Mr. Security,” as were former IDF generals like Moshe Dayan, Yitzhak Rabin and Ariel Sharon. Thus, although his decades-long contribution to Israel’s defense was far greater and far more enduring than that of any of his military counterparts, the Israeli public seemed never to trust him with the country’s defense.