Shining a Spotlight: Revealing China’s Maritime Militia to Deter its Use 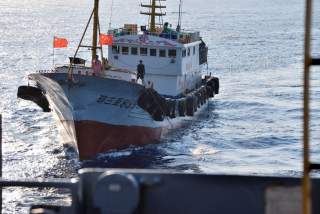 At the U.S.-China Diplomatic and Security Dialogue press conference on November 9, Defense Secretary James Mattis made a great contribution by using his top-level authority to shine a spotlight on China’s third sea force, the People’s Armed Forces Maritime Militia (PAFMM): “We… discussed the importance of all military, law enforcement, and civilian vessels and aircraft—including those in the PLA Navy, the Chinese Coast Guard, and the PRC Maritime Militia—to operate in a safe and professional manner in accordance with international law as we seek peaceful resolution of all disputes in the South China Sea.”

An authoritative public statement by the Secretary of Defense—the very first by anyone at his level—is extremely positive and long overdue. The PAFMM is eroding U.S. and allied interests by operating surreptitiously in the “gray zone” between peace and war, an approach Chinese sources term “War without Gun Smoke.” U.S.-China maritime rivalry is intensifying and almost any conceivable crisis or contingency would involve PAFMM forces. They offer a tempting tool for Beijing to complicate Freedom of Navigation Operations (FONOPS) and related U.S. patrols. This People’s Liberation Army (PLA)-controlled force harasses foreign ships, including those of the U.S. government; and mans the front lines of other international sea incidents to further disputed sovereignty claims. Yet it has received far too little top-level scrutiny and official public pushback. Now it is time to build on Secretary Mattis’s statement with further understanding and countermeasures.

China has three sea forces, each an Armed Forces subcomponent: the PLA Navy (PLAN), China Coast Guard (CCG), and PAFMM. Each has the world’s most ships in its category. They increasingly operate in concert under unified command and control. For decades, the PLA recruited marine industry workers (many fishermen), trained them regularly with their vessels as PAFMM units, and activated them for missions on demand. Recently, full-time PAFMM units have recruited ex-PLA personnel with generous salaries but no fishing responsibilities. They conduct operational deployments in disputed areas using larger vessels with mast-mounted water cannons for spraying, reinforced hulls for ramming, and reported weapons stores. Despite attempting to operate below the radar, Beijing has no plausible deniability for the PAFMM’s activities: the PLA oversees its doctrine, organization, training, materiel, leadership and education, personnel, and facilities. It operates in disputed sea areas and serves Beijing’s interests through the PLA operational chain of command under Commander-in-Chief Xi Jinping himself.

By choosing to employ soldiers disguised as civilian mariners, not conventional naval forces, Beijing has expanded the geographic scope of its influence and control without resorting to war, a classic case of “winning without fighting.” Use of the PAFMM tool is effective because it exploits foreign ignorance, inattention, and restraints. It is a key component of Chinese sea power, but most people do not know that. It operates actively in disputed areas and harasses ships of the U.S. and its allies and partners, but many encounters are not reported publicly.

The fundamental threat posed by the PAFMM is its ability to help China expand and strengthen its control over strategically important maritime space, with little cost or risk. For decades, part-time elite PAFMM units have helped to further Beijing’s disputed claims in international sea incidents throughout the South China Sea. Since 2006, relying heavily on the PAFMM, China has dramatically increased efforts to restrict foreign activities in strategically vital areas of the Western Pacific. It has aggressively challenged the legitimate maritime activities of U.S. allies and partners. It has also targeted and harassed U.S. Navy ships, yet faced no consequences.

In contingencies involving the PAFMM, U.S. and allied naval and coast guard officers will need to be able to make quick decisions regarding how to respond to this force but may be ill-equipped to do so. The U.S. has no way to match the PAFMM symmetrically, but the force itself has significant limitations and vulnerabilities. The U.S. government can and should do a much better job revealing the military nature of this perfidious force. With several low-cost policy initiatives, the U.S. could effectively curtail China’s use of the PAFMM in operations detrimental to U.S. interests and provide more options for escalation avoidance when encountering PAFMM forces at sea without harming U.S. interests. The following recommendations can help to take this under-recognized China-military-controlled force off the table as much as possible.

While the U.S. has allowed it to operate surprisingly unchallenged in the shadows, the PAFMM has many weaknesses. Optimized for cost efficiency and covertness, it is inherently limited in training, sensors, situational awareness, autonomy, initiative, and morale. Open source research reveals no equivalent to commander’s intent, self-generation of courses of action, or operating in isolation from supporting forces—key sources of initiative that empower naval forces and make them harder to contend with. The PAFMM is therefore unlikely to improvise well or continue operations in unexpected situations. Attempting to rectify these weaknesses would change its appearance and erode its perceived benefits—making it more expensive and conspicuous while showcasing more unmistakably its true military nature. The more clearly U.S. and allied officials display understanding of the PAFMM and its vulnerabilities, the more Chinese decision-makers and militiamen alike will doubt its ability to intervene without self-risk, escalation, and/or mission failure. Chinese leaders deeply fear failure in front of foreigners, especially if their citizens could become aware of it. To deter harmful activities, U.S. officials should reveal the PAFMM publicly, hold China to international standards of seamanship, and treat its three sea forces holistically.

Develop and disseminate a public narrative to reveal, counter, and deter:

Sunlight is the best disinfectant against a force customized to thrive in the shadows. The most important thing that the U.S. can do to better counter PAFMM threats is to educate sailors, the American public, and allies/partners on the nature of the force and the challenge it poses. This requires regaining the strategic initiative by laying down a “Googleable” trail of online information rapidly accessible to all, particularly when the issue rises to the forefront. To preempt and counteract propaganda, the U.S. must get out in front of the problem with its own authoritative statements, including a fact sheet and encounter documentation website. Open-source researchers, including at the U.S. Naval War College’s China Maritime Studies Institute (CMSI), have already published extensive scholarship to support such an effort. The Office of Naval Intelligence could be asked to fill in the gaps. This involves revealing egregious Chinese behavior, on a day-to-day basis, to deter future activity by the PAFMM. Leadership could do so by helping Fleet Commanders more quickly declassify and approve for public release PAFMM-related photos, videos, and other data coming off U.S. ships. Public reports, public affairs releases, and top officials’ statements should all contain robust coverage of the PAFMM. To remove the camouflage of Chinese deception and spin, accurate terminology (not “civilian, irregular, innocent, [merely] fishermen,” etc.) is essential.

There should also be a crisis response plan—with complete communications strategy and media guidance ready to go—before an incident erupts. U.S. officials should be mindful that Beijing will likely have ready prepackaged propaganda, deployable via powerful state media mouthpieces that the U.S. lacks.

Reexamine rules of engagement (ROE) and signal to China accordingly:

The U.S. should state, both with Chinese interlocutors and publicly for external credibility and reassurance, that:

Treat China’s sea forces holistically: link behavior of all three to U.S. interaction with them:

Even if Chinese interlocutors profess ignorance or dismiss these matters initially, American resolve to impose linkage will make them report back and inform organizational interests. Professions of ignorance signify a lack of seriousness about, and lack of support for, the U.S. Navy-PLAN relationship. The PLAN should not be allowed to “bear hug” the U.S. Navy for prestige and best practices as the “good cop” of naval diplomacy while the CCG and PAFMM “bad cops” (which the PLAN helps train) do the dirty work of bullying neighbors and harassing U.S. Navy vessels. To ensure safety and accident avoidance, the CCG and PAFMM must adhere to the same Code for Unplanned Encounters at Sea (CUES) to which the PLAN has publicly committed itself—together with other international standards of seamanship. The U.S. Navy should also continue to promote a binding regional code of conduct with robust rules of the road. Any Chinese failure to cooperate should trigger an explicit bottom-up review of activities that the PLAN itself values, such as naval diplomacy and other prestigious interactions.