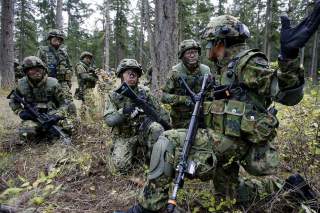 As the horror of the beheadings of two Japanese hostages sinks in, the debate not only about what might have been done to prevent the killings, but also what Tokyo should do moving forward is gaining momentum. For Prime Minister Shinzo Abe, the lesson to be learned is that Japan needs to strengthen its capabilities to protect its citizens from hostile situations abroad, and also take on a greater role in international military operations with allied nations. For others, however, their concern is more about avoiding such situations in the future and keeping its citizens out of harm’s way to begin with.

Bound by its 1947 constitution to mobilize troops solely for self-defense purposes, Abe has been trying to push through a legal revision that would allow the Self Defense Force to take a more active role in peacekeeping beyond its own borders, as tensions with neighboring China mount over the Senkaku Islands in the East China Sea on the one hand, and the threat of North Korea continue to loom on the other. The murders of journalist Kenji Goto and businessman Haruna Yukawa have raised Japanese consciousness of the threat of ISIS to unprecedented levels, and have broadened the debate about prospects for Japanese military engagement overseas.

The day after the video of journalist Kenji Goto’s killing was released, Abe told policy makers that restrictions preventing the SDF from evacuating Japanese nationals from emergency situations abroad should be lifted. The proposal is expected to be submitted as one of the security bills that will be presented to the Diet this spring. Members will also be considering a bill that will be based on last year’s decision to reinterpret Article 9 of the Japanese constitution that would allow Japan to assist in international operations for collective self-defense purposes.

Yet the fact that a ransom demand for the release of the two hostages was made only three days after Abe announced the government’s $200 million commitment to provide humanitarian relief to those Middle Eastern nations impacted by ISIS has been seen by many critics that Japan is no longer seen as a neutral country in the ongoing conflict in the region. Certainly, ISIS’s initial demand for exactly $200 million in exchange for the lives of Goto and Haruna made clear that the Islamic group viewed the financial aid as a direct attack on it. So while Abe has pointedly stated that the country would not join in any active military engagement against ISIS, nor will it provide any logistical support for such efforts, pacifists are concerned that rescue operations would put Japanese lives unnecessarily at risk. At the same time, critics have argued that even if the SDF were able to engage in operations to free the hostages this time around, it would have been unsuccessful. The rescue effort would have required the consent of the foreign governments, in this case Syria and Iraq, but such a consent may have been extremely difficult to gain for the areas where the hostages were believed to have been held.

More broadly, the beheadings have spurred public debate about the price to be paid in being part of the coalition of anti-terrorist governments. While security hawks highlight the killings as yet another reason for Japan to move forward with reinterpreting the constitution and be more actively engaged in providing military as well as economic security worldwide, voices calling for refuting such a move are growing stronger as well. Indeed, there has been considerable public support for a peace activist group that officially nominated Article 9 of the Japanese constitution for the Nobel Peace Prize the day Goto’s beheading was reported.

That voice calling for the pacifist tradition to prevail rather than Abe’s so-called proactive pacifism will be heard from none other than the Komeito Party, among others. Together with Abe’s Liberal Democratic Party, the conservative Komeito make up the coalition government, and the two parties will be discussing the security bills that will be put forward to the Diet later this month.

In order to garner support for his proposals for greater military commitment, Abe will need to be deft at painting a broader picture that goes beyond revisiting the failed negotiation to release the hostages. The U.S.-Japan alliance, which remains the bedrock of Japan’s defense strategy, remains strong, but the fact that the United States continues to be pulled in multiple directions to deal with crises worldwide cannot be denied. Amid continued tensions in East Asia, as well as possible future threats in the Middle East and beyond, there is greater urgency for Japan not only to reconsider its defense capabilities, but also its responsibility to ensure peace worldwide.