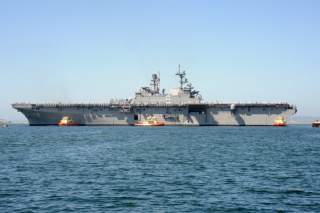 Eric Heginbotham and his colleagues at RAND should be commended for their recent report “The U.S.-China Military Scorecard: Forces, Geography, and the Evolving Balance of Power, 1996–2017.” It is one of the very best publicly available assessments of aspects of a potential Sino-American war, and it makes a clear and compelling case of its central conclusion: “Over the next five to 15 years, if U.S. and People’s Liberation Army (PLA) forces remain on roughly current trajectories, Asia will witness a progressively receding frontier of U.S. dominance.”  However, one of its more talked about recommendations—that of harvesting Navy aircraft carrier force structure to generate savings for other capabilities—is unfortunately not supported by their analysis.

Each of the report’s ten operational areas are fascinating and worthy of detailed analysis, and there are numerous wise observations and recommendations throughout the report. However, focus should be drawn to the report’s assertions that “To pay for [higher procurement] priorities, more rapid cuts to legacy fighter forces should be considered, as should decreasing the emphasis on large aircraft carriers” and “the U.S. Navy, for its part, could spread risk and increase flexibility by moving to smaller carriers, as well as save resources.” While the recommendations are surely composed with the best of intentions, they are neither supported by the report’s own analysis nor the findings of a forthcoming Hudson Institute report on the future of the aircraft carrier Seth Cropsey, Bryan McGrath, and I co-authored.

In the section on “Air Campaigns”, the RAND report finds that in a defense of Taiwan scenario, the contributions of fighters from Carrier Air Wings (CVWs) would be critical to attriting PLA air forces, in conjunction with USAF air power operating from bases in the First and Second Island Chain. The contribution of CVWs would be further elevated if the limited number of distant air bases in Guam and northern Japan were assessed to be under attack by long-range missiles, such as the DF-26 (something that section of the report did not model).

Another section of the report examines “Chinese Anti-Surface Warfare”, including PLA Over-the-Horizon (OTH) targeting, Anti-Ship Ballistic Missile (ASBM) capability, Anti-Ship Cruise Missile (ASCM) threats, and offensive submarine capabilities. The section lucidly conveys the rapidly increasing threats to surface ships, including aircraft carriers. If anything, the report understates the gravity of the threat in order to make the model consistent, by using relatively short-range carrier acoustic detection ranges by PLAN submarines, by not modeling the impact of a 3,000-4,000 km DF-26 ASBM, and by not displaying the effects of a surge deployment of the PLAN submarine fleet.

However, after establishing that carrier aviation would play an important role in an air campaign and that threats to land bases and surface ships are greatly increasing, the report’s conclusion calls for a “refocusing of procurement and force structure.” This is a logical and appropriate suggestion that seeks to prioritize the most important capabilities. In this section, though, the report states: “At the other end of the spectrum, large carriers, which are primary targets for China’s growing array of anti-access capabilities, may also be suboptimal. The U.S. Navy might productively explore smaller fast carriers, which could be escorted into harm’s way by more capable (and stealthier) destroyers, which might borrow promising technologies embedded in the Zumwalt class.” and further-on states “In an era of budgetary austerity, any discussion of procurement needs would be remiss in not addressing where savings might be achieved. […] The U.S. Navy, for its part, could spread risk and increase flexibility by moving to smaller carriers, as well as save resources.”

Consequently, the report views cuts to the large carrier force as a potential option in order to free-up funding for other, higher-priority capabilities. It is possible that a campaign-level analysis would conclude this is the best course of action (especially if the projected, relatively short-range CVW does not change). However, the RAND report’s analysis does not demonstrate this, in part because (as the RAND report acknowledges) it does not assess the interrelationships between the different scorecards. Such an assessment could test the effectiveness of the Joint Force with varying levels and types of carriers and identify sequel implications for other areas. For instance, the survivability of U.S. submarines could be significantly affected by whether PLAN Anti-Submarine Warfare aircraft can conduct operations freely, or if the operations of PLAN aircraft are dislocated by a sufficient number of Navy fighters flying from carriers. Alternatively, the analysis might show a decrease in the number of carriers and an increase in the number of another capability yields superior outcomes.

More importantly, though, the RAND report’s language seems to suggest “smaller fast carriers” would be more effective than “large carriers” because they would save resources and spread risk and increase flexibility. This assertion taps into a rich, historical debate in the U.S. Navy as to whether smaller or larger carriers are preferable either for reasons of cost or combat utility.

Today, it is unclear smaller carriers offer greater operational utility. Smaller carriers face challenges meeting defensive requirements, especially in poor sea states. Moreover, in general current and projected anti-ship ballistic missiles (ASBMs) capable of engaging medium-sized surface ships (such as destroyers) are capable of engaging not only large aircraft carriers, but also medium-sized carriers and amphibious assault ships. Also, the planar deck shape of a carrier, be it small or large, provides a unique and enormous top-down radar signature. Consequently, many types of over the horizon sensors would likely be as effective detecting large carriers as small ones.

Furthermore, although smaller, more numerous carriers would provide more aim points and thus “spread risk”, given the fact they would likely need to operate within relatively close proximity in order to generate sufficient sorties to meet baseline defensive requirements, their complication of an enemy’s search problem would be diminished. Operating large fleets of smaller carriers would also dramatically increase requirements for escorts and Combat Logistics Force units—especially if the smaller carriers were conventionally-powered—likely offsetting any envisioned savings that could be applied to other priorities.

In terms of cost, even though smaller carriers would be less expensive, the decline in capability would be significant. In general, this is because “steel and air are cheap”, while combat systems are expensive. Thus, there are significant incentives to making large ships like aircraft carriers larger rather than smaller in order to embark a larger air wing, more fuel, and more munitions. To evaluate this choice, our forthcoming study compares the Ford Class with an America Class amphibious assault ship, a modified Charles De Gaulle, and a modified Queen Elizabeth.

Nonetheless, episodic, rigorous analysis of this subject is required. It may be that changes in carrier cost profiles, aircraft technology, threat capabilities, or some other factors suggest the Navy should move to a different type of carrier force or reduce the number of carriers in its force. As testified by Assistant Secretary of the Navy for Research, Development & Acquisition Sean Stackley, the Navy is now conducting a study to compare alternatives to Nimitz size and type of aircraft carriers to see if “is there a sweet spot, something different other than today’s 100,000 ton carrier that would make sense to provide the power projection that we need that we get today from our aircraft carriers but at the same time put us in a more affordable position to provide that capability?” However, this analysis was absent from the RAND report.

In summation, the RAND report is important and should be lauded for identifying the grave trajectory of U.S. military superiority vis-à-vis China in the Western Pacific and for calling for a change in capabilities and concepts throughout the Joint Force, including the carrier force. We strongly concur, yet caution that the pursuit of smaller carriers requires further analysis before it is demonstrated to be a superior option for either cost or capability reasons. In fact, our report found that the carrier strike groups, with the large, nuclear-powered aircraft carrier at its core, remains the most effective and efficient means of providing sea-based air power to conduct strike, air warfare, and surveillance across the range of military options.

Timothy A. Walton is a principal of Alios Consulting Group, a defense and business strategy firm.