Should America Help Ukraine Hit Back Inside Russia? 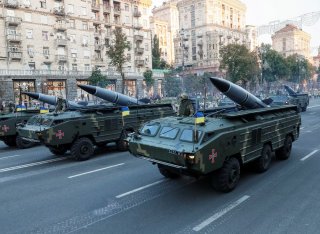 For years, a particular brand of realists has called for the United States to withdraw its forces from abroad and set up local balances of power around the world instead. It has usually been bad advice, but Ukraine and Taiwan are two places where this advice could truly help.

Why do I say these realists’ argument is invalid when it comes to America’s core alliance relationships in Europe and Asia? In those theaters, the United States secured its allies to a significant extent with the presence of U.S. forces and stabilized a coherent international order. This is far preferable to propping up, or restoring, the old multipolar balance of power, which the more ideological realists wrongly idealize.

In fact, the old international balance of power was a geopolitical nightmare and Americans always wanted out of it. Replacing it in two crucial regions after 1945 through an integrative alliance system was a truly historic achievement of American diplomacy. It is an instance of the imperfect progress that is sometimes possible in the real world and should be cherished for its rarity. Giving it up would be destabilizing for the world and self-defeating for ourselves; an expression not of realism but of pique.

However, this same brand of realism is right when it comes to partners that the United States cannot defend properly. Ukraine and Taiwan are the critical cases in point today. In these places, the United States can do little more than escalate towards nuclear war, a very dangerous threat that is also not a very convincing one.

This means that Ukraine and Taiwan urgently need to be armed to deter their aggressive neighbors on their own. It is their natural willingness to hit back when attacked, and hit back inside Russian and Chinese territory, that would make their threats more credible than ours, as well as less risky to the world.

These two allies need strong, survivable conventional weapons systems in order to have a convincing capacity to do this.

Are these the only countries that the United States should arm against great powers? Probably not. But they are the most urgent cases. It is a question of their basic safety—and that of the United States—in the coming days and months.

Later, the United States could consider whether a similar logic applies to the Baltic states, which it has committed to defend as NATO members but defends almost solely by nuclear threat. Perhaps there too, the U.S. allies can only feel safe when they have the weapons with which to retaliate on their own. They would no longer have to rely on the United States to issue implausible threats promising to start a nuclear war on their behalf.

Some realists also argue that South Korea and Japan would be better off with their own nuclear weapons arsenals. There is merit in this argument. However, it would be preferable if, rather than encouraging them to become independent nuclear powers, the United States would loan its own nuclear forces to their governments, with restrictions. For instance, loaning these two states survivable nuclear-armed submarines would keep the United States out of the line of fire while not resulting in permanent nuclear proliferation in additional countries.

For now, the United States has to deal with a terrible reality: the current administration has, through its capitulations on Afghanistan and Nord Stream 2, brought on an imminent danger of invasion of two important partners by nuclear-armed adversaries. Arming Ukraine and Taiwan to deter Russia and China on their own is probably the best way to minimize the risks to the United States without capitulating.

Real deterrence must be established before, not after the war starts. And real deterrence is achieved with counter-value weapons, not just counter-force defensive weapons.

Real deterrence, therefore, means providing Ukraine and Taiwan with conventional bombers and missiles that can strike deep inside Russia and China.

Is it too late to train them for using such weapons? The United States could ask its allies to quietly provide operator-trainers for an interim period. Fortunately, counter-value weapons don’t have to be as high-tech as counterforce ones.

The United States is seeing that it is not sufficient to give Ukraine and Taiwan short-range defensive military equipment. This type of defensive aid only makes it slightly more costly for Russia and China to defeat them. Ukraine and Taiwan alone would still pay the price within their own borders. This is inadequate and explains why we are facing the present threat from Russia and China.

It’s sometimes good that America protects its adversaries from its allies—when America actually protects those allies, as in NATO. This makes NATO a kind of international public order. But when America can’t protect an ally, it should not be protecting potential invaders from its retaliation.

Protecting Russia from Ukraine was something that the United States once openly did, in the 1994 Budapest Memorandum. That was when the United States pressured and persuaded Ukraine to give up its nuclear bombs and missiles in return for signed assurances from the United States and Russia that neither party would violate its sovereignty.

Were it not for this arrangement, Russia would have faced nuclear war when it invaded Ukraine in 2014. Moscow presumably would not have dared it. Russia’s ingratitude for this U.S. help is not just monstrous. It forces Americans to think again about the questionable aspects of the earlier U.S. policy, and to act correctively.

Ukraine should not get its nuclear weapons back. But it should acquire a solid conventional deterrent force. It has a right to it today, after what the United States did in 1994 in an act of pro-Russian idealism that has since been proven a mistake. It would correct the destabilization the United States inadvertently created all those years ago.

Ira Straus is an independent foreign affairs analyst and Chair of the Center for War/Peace Studies. He has taught international relations in colleges and has worked for four decades in organizations devoted to the Western alliances and their relations with Communist and post-Communist regimes.