Should Dreamers Be Preparing for a Legal Fight? 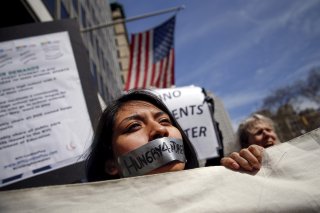 Polarizing discord over the constitutionality and prudence of the Deferred Action for Childhood Arrivals (DACA) program obscures more reasonable accord. Specifically, there is a credible case that DACA creates contracts that the government is honoring—despite mixed messages from President Donald Trump.

There are at least three ways to see DACA, established in 2012 by the Obama administration, as creating contractual government duties. For one, the program creates a framework to form traditional contracts. The memo creating DACA announced that applicants could—in exchange for identifying themselves and supplying information necessary for a background check—receive deferred deportation for two-year periods and other benefits. The transaction meets the three elements of contract formation: a participant’s application is an offer, the authorities’ grant of it an acceptance, and the swap of information for benefits is what the law calls “consideration.” To repudiate the government’s promise would be a breach of contract.

The U.S. Supreme Court has upheld similar government promises as contracts, arising out of the savings and loan crisis of the 1980s. A federal agency induced healthy thrifts to acquire ailing ones by promising favorable regulatory accounting treatment. Congress subsequently forbade using that treatment, and several thrifts successfully sued the government for breach of contract.

Another way to see DACA as forming contracts is to view the government policy as contract law treats rewards—such as for finding lost pets or sampling an innovative product. Offers of reward are accepted by performance, in DACA’s case by eligible people filing applications. In these cases, once performance begins, the other side cannot back out—an offer cannot be revoked after the pet hunt or product sampling starts.

One objection to calling DACA arrangements contracts is a disclaimer in the 2012 memo: “This memorandum confers no substantive right.” Materials also declare that government “can terminate or renew deferred action at any time, at its discretion.” Taken literally, these words may negate contract law’s requirement of an exchange, as the government denies giving anything at all. That could defeat a claim of contract.

But a third approach to contracts, called estoppel, renders promise-makers liable if those they promise reasonably and foreseeably rely on a promise. While spontaneous comments do not count, some official statements during the DACA application process may be so firm and induce such substantial reliance as to make the government duty-bound to honor its promises. Although applying estoppel to government actions is generally disfavored, the Supreme Court has not ruled it out, and DACA’s unique arrangements may warrant its use.

The Trump administration’s memo rescinding DACA is consistent with recognizing these arrangements as contracts or binding promises. It delineates DACA’s gradual winding down, not its abrupt termination. The memo sustains previously granted benefits, which remain in effect for the duration of their two-year periods. It directs officials to continue to handle, on a case-by-case basis, pending and accepted applications, plus those expiring within six months. Beyond that, no further applications will be accepted.

Had the memo announced an immediate shutdown, participants would hold credible claims for breach of contract. Any significant Trump administration departures from the terms of the 2012 memo would also be a breach. The president’s conflicting messages about DACA—vacillating between declaring it beyond the executive branch’s authority and promising its durability—may create additional contract rights. In contract law, when such equivocation raises reasonable doubt about a party keeping its side of the deal, the other is entitled to request assurance of due performance. DACA applicants may consider requesting such assurance now.

While neither traditional contract nor estoppel makes DACA permanent, a fourth view of the circumstances could, though it is rarely used. Called quasi contract, promises are implied to prevent unjust enrichment by one party of another, exemplified by the implied promise of a patient, unconscious in the street, to pay a treating physician. In DACA’s case, proponents contend that applicants gave the government the benefit of their information on the strength of not merely a single two-year benefit period, but for recurring renewals.

In all cases, the government would also be entitled to assert defenses commonly available in contract cases. For example, it would be excused from its side of the bargain to any applicant who misrepresented information. The government might assert the defense of illegality if it believed, as some in the Trump administration do, that the DACA program is beyond the executive branch’s power to create. But there is tension between that claim and the Trump memo’s careful delineation of the winding down.

A contract perspective offers a fresh way to think about DACA, using venerable tools in an unusual setting. These tools focus the analysis, which should be on individuals not groups; specific circumstances not broad categories; and honor widely shared values such as bargains, promises and reliance. The message, amid the rancor, should be: the United States is a nation of laws, not political fiat.

Lawrence A. Cunningham, a professor of business law and contracts at George Washington University Law School, is the author of a dozen books, including Contracts in the Real World: Stories of Popular Contracts and Why They Matter.