Should Obama Apologize in Hiroshima? 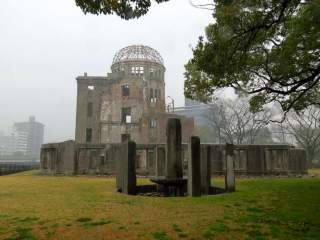 Now that President Barack Obama has announced his intention to visit Hiroshima later this month, many questions have been raised about whether he will proffer regret or apologize for the dropping of two nuclear weapons on Hiroshima and Nagasaki by the United States in late 1945. Should he apologize? Given his past speeches in Cairo, Obama has been criticized by some conservative media in the United States as America’s “apologist-in-chief,” prompting the White House and Ben Rhodes to declare that the visit is to be “forward-looking,” and that it will “highlight his continued commitment to pursuing the peace and security of a world without nuclear weapons.” Interestingly, the debate on Obama’s intentions raises all sorts of questions about modern understandings of history, and about apology politics in general. To what extent should state leaders apologize for historic crimes committed before their own time? Should the United States apologize for its wrongs? Should it apologize for Hiroshima and Nagasaki in particular?

Certainly, of the two, Japan has a long history of apologies. Japan’s current Prime Minister Shinzo Abe has grappled with the historical legacy of Japan’s conduct during the Second World War, successfully proffering regret to the United States and Australia, though less successfully to South Korea and China. His speech to the Australian parliament in July 2014 expressed “sincere condolences.” His speech to a joint session of the U.S. Congress in April 2015 expressed “deep repentance” and “eternal condolences.” In both speeches, Abe seemed to acknowledge Japanese responsibility for instigating the war, though his language was constrained by the domestic political realities of his conservative supporters in Tokyo. Prior to these speeches, his views on the Kono Statement, and affiliation with Japanese historical revisionists like Toshio Tamogami raised the possibility that Abe agreed with such accounts. Chinese observers—for geopolitical rather than academic reasons—attempted to shape an isolating narrative around Japan because of these debates, but were stymied by Abe’s nuanced approach from 2014 onwards.

What of the United States? As the leading hegemon, victor in the Second World War and victor in the Cold War, should it apologize for actions it has carried out in the past? Many would agree with the old idea: “History is written by the victors.” However, this is less and less true in the modern world, as liberal norms affect expectations of state behavior in international politics. One only has to consider the whole range of “critical studies” in Western universities to see that in some states, at least, history has become a deeply contested area, continuously open to debate and self-criticism. Second of all, losers do actually often write their own histories. Turkey after the First World War, vis-à-vis the Armenians; North Korea on who started the Korean War; Russia after the end of the Cold War: these are but a small sample of states that maintain and protect—often using legal means—their own historically regressive narratives.

What is the United States’ relationship with its own past? As has been implied by the above examples, the domestic nature of the regime often determines the state’s attitude to history, though sadly some liberal states have flirted with state control of textbooks. The United States is a liberal democratic power with a strong set of ideals and values, which it subscribes to in its foreign-policy behavior. It does not always live up to its own standards, but very often civil society, American academics and journalists will swiftly point this out in the public arena. Like Japan, the United States has apologized for its past. Few foreigners will know that the United States has apologized to Native Americans and Hawaiians a number of times for historical grievances; while it has not yet atoned for the U.S.-Philippine War, it has attempted to redress the stripping of benefits from Filipino soldiers, who served on the American side in the Second World War. So, clearly, the people who constitute the United States believe that it should apologize for past grievances. What of the nuclear bombing of Nagasaki and Hiroshima? Should the United States apologize for those specific acts? Here, the answer—like Abe’s speech to Congress—should be more nuanced.

Japan is one of the United States’ closest allies. It has played an extremely positive role in international society since the end of the Second World War, and is a strong supporter of the liberal international order and its attendance infrastructure. It is also deeply important partner in the American security strategy for the region. However, things have not always been thus. President Obama could take a pragmatic line with his Japanese audience in Hiroshima, and remind them of the ethical, strategic and geopolitical reasons for dropping the nuclear weapons. The classical argument—from the American side—is that the United States was fighting a “just war” against Japanese aggression. A stronger ethical argument was that the bombings actually saved lives. The idea that Operation Downfall (the planned invasion of Japan) would cost millions of casualties is bolstered by the large numbers of casualties involved in the invasion of Okinawa (150,000 casualties in three months). It is also bolstered by the fact that the bombings were the crucial element in Japan’s Emperor Hirohito’s push for peace. Obama might have argued that both targets were hubs of military industry. He might also have argued that a costly invasion of Japan might have led to Soviet involvement, and ultimately the Cold War partitioning of Japan into two halves. Given Korea’s continued dismemberment, it is impossible to gloss over the human suffering that such an event would have cost Japan in the long run.

However, the most important function of any apology is the implicit promise that one will not repeat the offensive behavior. Without this commitment, apologies are meaningless. Abe’s speeches in both Australia and the United States both held that implied commitment. Japan—he stated—valued “freedom and democracy.” It held “human rights and the rule of law dear” as “a member of the Western world” and would never again “fall back onto force or coercion.” Japan had—he said clearly—changed.

President Obama’s decision to speak on nuclear nonproliferation is thus a masterful symbolic gesture in this direction. It expresses regret, without having to face the apology debate head-on. It is, within itself, a form of apology. Indeed, it is a nuanced, thoughtful approach to the whole historical debate that permeates Asia Pacific narratives of the Second World War. It speaks to the sense of pain that Japanese still feel on the bombings, without entering the pragmatic arguments above. Though these are strong, they are unlikely to serve this function. The primary danger is that his visit panders to some elements within Japan who see the bombings as symbols of Japan’s victimization. Such narratives derive from revisionists, who tend to overstate Japanese suffering and underplay Chinese and Korean suffering. However, if handled correctly, President Obama’s presence in Hiroshima, his message of peace, and nuclear non-proliferation will provide their own balm to the wider nation of Japan and its very real sense of suffering.

If one considers the needs of the U.S.-Japan Alliance for what promises to be a rocky regional future, such a conversation—between old friends—is vital to the long-term strength and integrity of the alliance. What could be more American than a face-to-face attempt at closure between two old friends?

John Hemmings is an adjunct fellow at the Pacific Forum CSIS and a doctoral candidate at the London School of Economics (LSE), where he is working on U.S. alliance strategy in the Asia-Pacific. Follow him on Twitter: @johnhemmings2.