Should the United States Sell Fighter Jets to the Gulf? 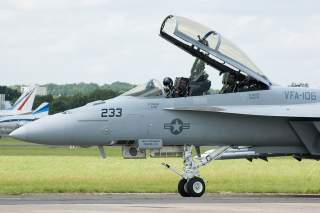 The timing and phasing of recent U.S. arms deals in the Middle East underscore the complicated balance for the United States of addressing the concerns and needs of multiple partners in the region who frequently view each other with suspicion.

The White House approved the sale of fighter aircraft to Qatar and Kuwait in late September, and the State Department formalized its sign-off in November. Congress now has thirty days to pass legislation to block deals before they move forward. The sales, worth more than $32.2 billion, will include as many as 72 F-15 Strike Eagles to Qatar and 32 F/A-18E/F Super Hornets to Kuwait. An expected sale of F-16 Fighting Falcons to Bahrain, however, appears to still be waiting approval.

After being on hold for three years, reports that sales would be approved in September came just two weeks after the signing of a new 10-year $38 billion military aid package to Israel.

Among the economic and strategic reasons for Washington to approve the deal: The production lines of the Boeing F-15 and F-18, and the Lockheed F-16, are scheduled to close if they do not receive new orders. If they close, the only advanced fighter the United States will be producing after 2020 is the F-35 Lightning II – an as of now unproven aircraft. A loss of the infrastructure and skilled workforce that produces the high-tech F-15, F-16 and F-18 fighter aircraft will put the American defense industrial base at risk.

Also, in keeping these critical production lines open, the potential for follow-on orders increases. The U.S. Navy, for example, has indicated that it hopes to buy more F-18s and it has warned of a fighter shortfall if the production lines are closed.

If the United States were to disapprove the sale of new fighters to the Gulf states, other weapons producers would be eager to gain a larger share of Middle East arms sales, with fighter sales representing the ultimate prize. In fact, the delay of fighter sales has already resulted in Qatar purchasing 24 Rafales from France and Kuwait ordering 28 Eurofighter Typhoons from Italy – both with capabilities comparable to the U.S.-made planes.

Another argument in favor of the sales: In the wake of the Iran nuclear deal, many Sunni Arab states have grown alarmed by the White House’s concessions to Iran under last year’s controversial nuclear deal. They are further unsettled by Washington’s unwillingness to challenge Tehran’s regional aggression. Providing fighter aircraft to these countries gives them the capability to counter Iran and target its proxies, while cementing a dependence on the U.S. for parts and maintenance support. The respective air forces will also be trained by the United States, which can give Washington leverage. The interoperability of these aircraft with other U.S. allies is also key to the success of future coalition missions such as the campaign against the Islamic State (ISIS).

The sales will also help the United States sustain major U.S. military installations that support the campaign against ISIS and serve as deterrence to Iran. Al Udeid Air Base near Doha, for which the United States recently signed a lease until 2024, is home to a key command center that directs all allied air and space operations for the Middle East. The U.S. Navy’s Fifth Fleet is meanwhile headquartered in Manama, Bahrain, while Kuwait remains an important staging area and logistical hub for U.S. military operations in Iraq.

The Gulf states are very much in the market for new aircraft. Qatar’s aging Mirage 2000s lack such core capabilities as midair refueling. They are primarily meant for an air defense role. This shortfall is evident in their limited role in the campaign against ISIS, where only one escort sortie was flown in support of the initial strikes into Syria in September 2014.

Kuwait is looking to replace its legacy F/A-18C and D fighters that were delivered in the early 1990s. New jet fighters will improve each state’s capabilities, allowing them to better defend their airspace, offer greater contribution to coalition efforts in the fight against the Islamic State and improve their deterrence against an increasingly belligerent Iran.

That said, there are reasons for caution. Most obviously, Qatar and Kuwait are known centers for terror finance, with terrorist financiers for multiple terror groups, including al-Qaeda and Hamas, operating freely within their borders.

Meanwhile, the sale of additional F-16s to Bahrain was not included with the announcements Thursday, suggesting that conditions tied to the tiny island nation’s human rights policies have still not been met. Bahrain has harshly suppressed political dissent in the wake of the Arab awakening, killing protesters and jailing activists.

All of these actions have been condemned by the United States, and they have contributed to Washington’s reluctance to approve the fighter sales. But the most significant sticking point for Washington is concern that Israel’s Qualitative Military Edge (QME) will be eroded by advanced fighters going to countries that refuse to acknowledge the Jewish State’s right to exist. By law, the United States is obligated to ensure that Israel maintains its QME and it regularly scrutinizes arms packages to potential rivals in the region with this in mind.

With a new aid package worth $38 billion over ten years, Israel will be able to buy more fighters for itself, including the stealthy F-35 – an aircraft projected to be so advanced that no other country in the region is permitted to purchase it other than NATO member Turkey. There appears to be a fairly wide consensus that U.S.-Israel strategic cooperation and Israeli access to cutting-edge U.S. munitions and sensors sufficiently safeguard Israel’s QME – even with the sale of these fighter jets to the Gulf states.

To be sure, Qatar’s F-15s and Kuwait’s F/A-18s are formidable aircraft that could challenge Israel’s air supremacy. However, these states could not mount a sustained challenge to Israel without U.S. support. In short, these states will require U.S. technical assistance to keep their jets in the air.

As precedent, consider the situation of the Iranian Air Force after the 1979 Islamic revolution: The Iranians had just acquired state of the art F-14 aircraft from the United States, which withheld its technical support, resulting in Iran only able to keep a dozen of 77 aircraft airworthy.

If, however, the Gulf states chose to purchase jet fighters exclusively from other countries, there would be little the United States could do to limit their use in a future conflict. Any opportunity to leverage the relationship would be lost if the Europeans, Russians, or Chinese stepped in to make the sale. And it hardly needs mentioning that Israel’s QME is not part of their decision-making process.

As concerns over a shrinking qualitative advantage rise, calculating the benefits and liabilities of selling advanced weapons to the Sunni Arab states in the Middle East will become even more challenging. The United States must maintain a clear-eyed view of the changing balance of power in the region and where Israel stands vis-à-vis its adversaries and potential adversaries. The growing Iranian threat – both to Israel and the Sunni states – is and will remain for the foreseeable future the most significant complicating factor.