Sinews of Partnership: Reflections on the Trans-Atlantic Discord in Paris 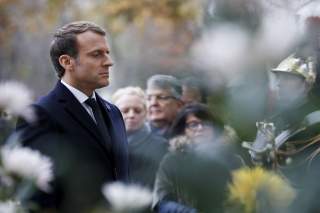 What happened in Paris on the occasion of the centenary of the armistice of the First World War is important—because it highlights the stress points in a world that has never been so globalized yet highly fragmented.

French President Emmanuel Macron, in his remarks, noted the difference between the kind of patriotism that is akin to loving one’s family and the kind of nationalism that amounts to hating the other. He defended a conception of international relations based on multilateralism. Angela Merkel, for her part, criticized Trump’s skepticism of multilateral cooperation without mentioning him.

Barely back from Paris, Donald Trump reacted by attacking Emmanuel Macron, whom he derided as having “very low popularity.” In a series of tweets, the president also responded to the proposal of his French counterpart to create a European army—already considered “very insulting” at the beginning of the commemoration weekend of the anniversary of the end of the First World War.

“Emmanuel Macron suggests building his own army to protect Europe against the U.S., China and Russia. But it was Germany in World Wars One & Two - How did that work out for France? They were starting to learn German in Paris before the U.S. came along,” he wrote on Twitter. “Pay for NATO or not!” he continued, reiterating his demand that European NATO members rely less on U.S. military spending for their defense.

These divergent points of view between Europeans and President Trump reflect a real rupture. On matters ranging from climate change to Iran to trade to Israel and the Palestinians to the security of Europe, the differences are as wide as the gap between the principle of multilateralism and a go-it-alone vision of international relations.

At the same time, Europe is itself divided, subject to nationalist currents. In the European Union, numerous governments are either dominated by nationalist parties or fractured by weak coalitions. France is now the strongest country in which the leadership is fighting back against nationalist jingoism and for a progressive patriotism.

But in some ways, there is hope on the horizon. Several African heads of state, including the king of Morocco, were also among those present in Paris. Their presence in the commemoration sent a message of hope, in that it signaled a desire for connectivity, an effort to show understanding of the historical suffering of a continent at war. But their presence also reflected a forward-looking stance. Africa, while dogged by the threats of terrorism, climate change, and mass migration, also boasts extraordinary potential for growth. There is a desire on the part of Africans from disparate walks of life to build their own multilateralism, by establishing a new kind of partnership with Europe and North America. It must be done on the basis of mutual benefit, in a manner consistent with the objectives of sustainable development. It must above all allow for the improvement of living conditions and better access to information, water, energy, transport, and new technologies through qualitative leaps for the entire African continent.

The inauguration this week by King Mohammed VI and the French president of a first-ever African high-speed rail line—the “LGV,” connecting Tangier and Casablanca—together with the launch of satellites MOHAMMED VI A and B, provided indications that such collaborations are developing. These projects are matched by American private sector investment in Morocco, as Boeing does in aeronautics by creating its so-called “industrial ecosystem” in the kingdom. In addition, the giant American aircraft manufacturer Bell Aircraft Corporation intends to invest soon in Morocco, viewing it as a gateway to the African market.

In the spirit of these promising new ventures, perhaps it is time to leave aside jingoistic polemics, overcome divides across the Atlantic and on the continent, and again ask, as diplomats memorably did in Paris a century ago, how can we collectively make peace prosper?