Singapore Summit: It's a Start, Not a Miracle 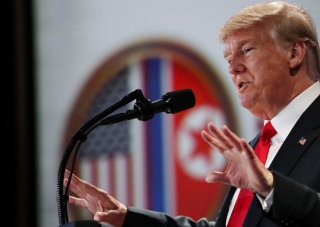 The Singapore Summit between United States President Donald Trump and North Korean leader Kim Jong-un is over. It was definitely historic. But was it good?

The critics have no doubt it wasn’t. “Trump met with Kim without preconditions!” “Nothing but a photo op!” they sneer.

It is true that the official summit statement has only four very general points and is shy on details. But did anyone really expect a lot more out of the first meeting ever of this sort? If much more had come out, it wouldn’t have been a diplomatic coup—it would have been Biblically miraculous.

The Trump team went into the process with eyes open. They studied all the failed attempts of Trump’s predecessors. They should be given a little breathing room now, to see if they can grow those four points into something concrete and substantial.

The team President Trump has assembled—Mike Pompeo at the State Department, John Bolton at the National Security Council and, looming quietly in the background, Jim Mattis at the Department of Defense—comprises precisely the sort of deputies needed to deal effectively with Kim Jong-un. They are smart, tough, and cautious. They are the antithesis of reckless and do not have a naive view of human nature.

Their strong collective stances, together with Kim's weak economy, are what brought North Korea to the table. If they plot the right course, they may be able to keep him there and produce progress. Again, time will tell. America should give them that time.

Now, it is not all sunshine and flowers. Kim's long history—personal and familial—of game-playing and deception mandate great caution and a significant dose of skepticism. Team Trump showed a clear willingness to walk away at the first sign of game playing—as they did when Kim didn’t send his preparatory team to Singapore as agreed.

When Trump pulled the plug, Kim was spooked and went running to the South Korean president to get things back on track. There is no reason to believe that the U.S. will not do that again if North Korea tries to pull an Iranian “goal post sliding” routine, as they did with former American Secretary of State John Kerry.

Rather than sneer, Americans should plan for success. Let’s assume that the process proceeds and progresses to the point that both nations are ready to codify what the U.S. will do, and what North Korea will do. Then, for goodness sake, please, both sides should make this a treaty, presented to be ratified in the U.S. Senate.

This is a critical point. Ratification never happened with the Iran deal. But ratification of foreign treaties is the standard and proper constitutional order and simply the right thing to do. It would also send a huge message to Kim as to the seriousness of the American position.

The bottom line is this: the Summit was an excellent first step, but Trump must stay cautious, and be ready to move in multiple directions—including some very tough ones if necessary.

The carpers need to check their real motivations. Do they want America to succeed in making the Korean peninsula and the world safer, or do they really want Trump to fail?

The Summit has presented an opportunity to move forward, and the U.S. should not allow politics to blow this one.

America should get behind the effort and push for the best outcome possible. That is more likely with a loyal opposition asking the right questions, rather than rock throwers determined to cripple the effort regardless of the damage caused.