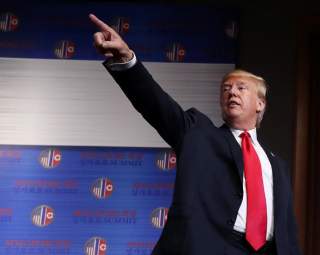 When the Trump administration announced by way of the South Korean national security advisor that President Donald had accepted North Korean leader Kim Jong-un’s invitation to meet, the entire Beltway area couldn’t believe the news. Most of them agreed it would be an unprecedented gamble by Trump, and only the minority were actually comfortable with the idea. Defense Secretary Jim Mattis and H. R. McMaster, the national security advisor at the time, were skeptical about the president’s decision and wondered whether he really understood what he was getting himself into.

Trump would have none of it. He forged ahead with his plan, betting that his gut instinct and daredevil Houdini routine would be a winning combination on the issue of North Korea’s nuclear weapons and ballistic missile program—an international problem that previous Republican and Democratic presidents have been unable to solve.

The June 12 summit with Kim Jong-un that almost fell through the cracks was the biggest stage Trump has performed on so far in his presidency—maybe even in his entire life. Doubters and “haters” didn’t give him a chance, but Trump clearly thinks he has performed brilliantly. Sitting at a table next to Kim as he was putting his signature on a joint communique—one which states the Kim regime’s “firm and unwavering commitment to complete denuclearization of the Korean Peninsula”—you could only imagine that chants of “Nobel! Nobel!” were going through Trump’s Head.

Whether he will actually be graced with Nobel laureate status depends on the dozens of senior and working-level talks U.S. officials will have with their North Korean counterparts in the weeks and months ahead. While the joint statement Trump and Kim signed yesterday was a large step in the right direction, it simply reaffirmed the principles of prior declarations going back to the early 1990s. There was nothing new, illuminating, or innovative in the document. In much the same way the 2005 Six Party Talks communique put pen to paper on a denuclearization-for-normalization and peace scheme, the Trump-Kim statement the president bragged as “comprehensive” was in truth a minimalist attempt to codify rough principles to guide future meetings. The single-page framework spoke of grand aspirations for a nuclear-free Korean Peninsula, “a lasting and stable peace regime on the Korean Peninsula,” and a new U.S.-North Korea relationship, but it did nothing whatsoever to clarify how long the transformational process is supposed to take or which side will do what and when.

Verification and inspection protocols, technical declarations, and the synchronization of nuclear dismantlement, economic relief, and diplomatic normalization are treated as pesky details to be negotiated by the experts at a later date—hopefully sooner rather than later. It is those pesky details, of course, that have killed previous nuclear talks and made the North Korean problem into the top U.S. foreign-policy priority. President Trump is flashing smiles and talking to the media as if he is on the precipice of an historic diplomatic coup, but the reality post-Singapore is far less exciting. Secretary of State Mike Pompeo has an enormously difficult endeavor in front of him.

The document is a skinny list of generalized commitments without an ounce of meat on the bones. Even the most pessimistic analyst who expected an all-optics, no-substance summit will be unimpressed at the communique’s contents. After all, Pyongyang has not agreed to anything in the 2018 declaration that it wasn’t already agreed to in 1992, 1994 and 2005. What, you may ask, was actually accomplished in Singapore?

The truth is we don’t know yet. On paper, nothing was really accomplished. But the optics of Trump and Kim walking along the colonnade together, addressing reporters side-by-side, and heaping praise and warm words on one other as if they were long lost relatives is not nothing. Less than a year ago, these two men were insulting and threatening one another’s countries with destruction. Now, they appear to have struck enough of a personal rapport to order their subordinates to take the diplomatic effort into the next stage. It may not sound like much, but perhaps a breaking of the ice and the kicking of the negotiating can down the road was have been the most we could have hoped for.