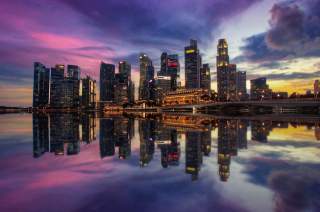 Over its sixty-seven-year history, officially, the People’s Republic of China looked up to foreign countries as inspiration only twice. In the early 1950s the Soviet Union guided the Communist Party of China. Yet by 1969 the two countries nearly went to war over ideological and territorial disputes. Then, after a long hiatus, Deng Xiaoping’s visit to Singapore in 1978 ushered in a prolonged period of keen interest in the city-state’s recipe for economic success.

In Singapore, Deng found a dynamic and fast-growing polity run by ethnic Chinese, while Hong Kong was still a British colony. Partly for that reason, Hong Kong society could not be openly extolled by the Communist Party of China (CPC).

To be sure, much of Deng’s economic architecture had to do with export orientation and what Western economists call “financial repression,” which borrowed heavily from the Japanese, South Korean and Taiwanese post-war playbook. Popularly detested for its war-time excesses, however, Japan could never be acknowledged in China as a legitimate source of inspiration beyond envy of its living standards. This is despite the fact that Japan had been dominated by one party—the Liberal Democratic Party—until the 1980s. Although culturally proximate, fast growing South Korea and Taiwan could not be officially endorsed by Deng because of the enduring legacies of the Korean War and CPC’s feud with the equally authoritarian Kuomintang political party.

Then, these two “little dragons” moved away from one-party rule, largely of their own volition. Both countries were democratizing fast in the 1980s–1990s. Singapore, though capitalist and U.S. aligned, has been continually dominated by the People’s Action Party since its inception in 1965. For that reason, quite apart from its stellar economic record, Singapore is still drawing much interest from Chinese establishment thinkers.

When Singapore was expelled from the Malaysian federation in 1965, its leaders were concerned that the tiny city-state might not survive as an independent entity in the rough and tumble of post-colonial Asia. At the time, living standards there were roughly comparable to Mexico. By 1990, GDP per capita had risen to about $13,000, surpassing South Korea, Israel and Portugal. Today, GDP per capita is about $56,000, making Singapore one of the richest countries in the world, even richer than Hong Kong. Seen through CPC eyes, therefore, Singapore is a “dream come true”: a seemingly Confucian society that shook off its colonial shackles and subsequently subdued the notorious Middle Income Trap. And it did all of that without fully democratizing, even while it enjoyed consistent American support along the way.

On the other hand, what could not escape the gaze of critics of the Singapore “fever” in Mainland China are the size disparities between the two countries and the institutional differences. To begin with, unlike densely urbanized Singapore, China had been overwhelmingly rural on the eve of Deng’s reforms, and many of its modern travails were a reflection of “peasant issues.” Secondly, Singapore inherited a robust British-style judicial system that underwrote free enterprise and property rights, while China’s legal system was in tatters on Mao Zedong’s death in 1976.

Singapore is best described as a “benevolent authoritarian system.” It values efficient government with highly paid civil servants and ministers who resist corruption. China’s streak of authoritarianism is more rigid. Despite the anticorruption campaign underway at present, China has not immunized its officials from corruption by raising their salaries dramatically along Singapore’s civil service levels. Judicial reform in China is stalling.

What attracts China to Singapore today? Singapore has become so much back in vogue in Chinese political discourse under Xi Jinping because Xi wants to give markets a greater role in determining commodity allocation, to restructure China’s State-Owned Enterprises (SOEs) and to adopt a centralist approach to policymaking that invites Singapore as a role model. The record and experience of Singapore’s legendary sovereign fund, Temasek, has become the holy grail of today’s Chinese reformers.

To a certain extent, Singapore’s founder, Lee Kuan Yew, served as a tutor to successive Chinese leaders and as China’s intermediary to Southeast Asia, Japan and the United States. He oversaw a sustained top-down effort to remold Singaporean society along Confucian lines and “weed out” excessive Western-style ideas of individualism and materialism in the 1980s, well before a similar effort was launched by the CPC in China. Singaporeans were, by and large, proud to show China the light and benefitted from that role. After all, Lee himself had been an ardent student of the Japanese developmental state. Yet Lee did not shy away from criticizing Japanese firms operating in Singapore for being too insular, and for not employing enough local managers.

Lee Hsien Loong, the founder’s sixty-five-year-old son and current prime minister, brokered the historic meeting in the city-state last year between Xi and Ma Ying-jeou, the former president of Taiwan, thus giving Singapore much credit for healing the divides across the Sinophonic world. For a while, it seemed that Singapore punched many times above its geopolitical weight on the world stage.

But Singapore is growing wary of Chinese emulation. There has always been a latent fear in the city-state that as soon as China becomes strong enough, it will dispense with its “tutor.” Globalization has tied the two economies together very tightly: China (including Hong Kong) is today Singapore’s largest trading partner, ahead of the United States, Japan or even next-door neighbor Malaysia.

Singapore’s economic anxiety is compounded by China’s growing military assertiveness around the South China Sea. In January 2017, China impounded nine Singaporean-made Terrex Infantry Carrier Vehicles in Hong Kong that were on their way back from Taiwan, where Singapore had been using them in training exercises. In the past, China rarely challenged Taiwan over its military ties with Singapore, allowing the latter’s army to train there. The Chinese seizure of the Terrexes was more likely an attempt to end Singapore military training on Taiwan, although possibly the Chinese were also signalling displeasure over Singapore’s military contacts with the United States.

Mounting maritime tensions are testing Singapore’s affiliation with the Association of Southeast Asian Nations and its longstanding military ties with the United States. In that sense, mainland and “diaspora” Chinese interests strikingly bifurcate, and much the same underlying anxiety can be felt in Hong Kong as well. In both Singapore and Hong Kong, the influx of mainland Chinese tourists, students, businesspeople and migrants sometimes stirs up resentment, both among the low-paid local workforce and among the patricians.

For all these reasons, it is unlikely China’s enthusiasm for the Singapore model will nudge Singapore away from its U.S. military umbrella, at least not in the short run.

Niv Horesh is visiting professor of China Studies at Durham University, UK. Jonathan Paris is a London-based political and security analyst who lived in Singapore from 1980–83 and coedited The Politics of Post-Suharto Indonesia.