A Skeptics Guide to Managing the India-Pakistan Conflict 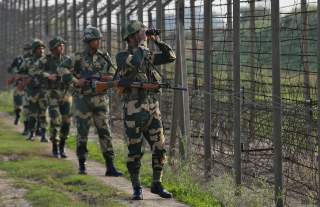 The United States and China have essentially different and indispensable partnerships with India and Pakistan, and this understanding shapes their view of the India-Pakistan conflict.

There are two explanations of U.S. thinking about Pakistan. One, the United States acknowledges Pakistan’s all-important assistance in resolving the Afghan conflict and appreciates its efforts for convincing the Taliban, including by releasing important top Afghan leaders as a bargaining chip, in the ongoing U.S.-Taliban conciliation process.

Two, there is a completely opposite view about Pakistan when the United States pursues its containment/balancing strategy against China, in which India is rated as playing a linchpin role for Washington. In this larger context, terrorism has the potential to destabilize India, which Washington sees as a strategic partner and counterweight to China’s rise—one of the primary strategic threats to the United States. In this sense, the United States regards the persistence of terrorism against India as hamstringing U.S. policies in Asia.

Since anti-India militants are mostly alleged to be in Pakistan or in its administered part of Kashmir, the United States and its international partners, including Britain and France, have criticized Islamabad for its patronization. These countries have also proposed resolutions in the United Nations and other multilateral forums to increase the legal, diplomatic and economic pressure on Islamabad to stop supporting anti-India organizations and individuals allegedly functioning on its territory. Pakistan’s placement on the Financial Action Task Force’s watch-list represented one of Washington’s various tools of diplomatic compellence to achieve this objective.

By this token, even if the United States succeeds in securing Afghan reconciliation with help from Pakistan, the pressure to contain radical elements from attacking India would continue. The militancy factor may also continue to dent their bilateral security and economic ties. Thus, when Pakistan’s foreign minister Shah Mehmood Qureshi talks of hunky-dory U.S.-Pakistan relations after the progress in the U.S.-Taliban talks, he may still have to wait. Because the resolution of the Afghan conflict is only the part of the U.S.-South Asia strategy; the significance of Pakistan in the broader U.S. Indo-Pacific rebalancing strategy appears to be unknown to both American and Pakistani strategists.

After the 2019 Pulwama terrorist attack, New Delhi’s South Block found it easier to garner international support for conducting an airstrike in Pakistan’s main territory, since there is a perception in the international community that the attack’s masterminds were in Pakistan. John Bolton, the National Security Advisor to the U.S. president, openly supported India’s right to self-defense. And, Mike Pompeo, the U.S. Secretary of State, later dubbed the Indian incursion in Pakistani airspace as a “counter-terrorism strike.” It was an inauspicious moment for Pakistan, as its officials saw the international community connecting Kashmiri terrorism to the presence of anti-India religious outfits in Pakistan while disregarding Indian state oppression in Kashmir.

On the Kashmir issue, the official U.S. stance is one of respecting the “the pace, scope and character” of the dialogue over Kashmir as worked out by Pakistan and India. Perhaps due to the adverse reaction from the South Block in India, former U.S. president Barack Obama withdrew from mediating the resolution of Kashmir issue, and termed it as “a tar pit diplomatically”.

Having been disappointed by the international community’s response, the Pakistani Air Force (PAF) retaliated with an air raid on Indian-controlled territory and shot down Indian warplane(s). The PAF’s airstrikes revealed two things for the U.S. interest. One, it proved staggering for the United States, which has apparently pinned its hopes on the Indian military to counter the rising military power of China.

Two, it exposed the antiquated nature of Indian defense equipment, in particular, the air force arsenal. The shootdown of the Indian warplane(s), a MiG-21 Bison (and another aircraft according to unconfirmed reports), has panned out to be a blessing in disguise for the U.S. aircraft businesses, Lockheed Martin and Boeing. Foreign Policy’s Pentagon correspondent has already quoted some experts and think tanks (with funding from the aircraft-makers) describe the shootdown of Indian jets as “an embarrassment” for the Indian Air Force.

Thus, if the United States expects India to compete with or contain China, the current South Asian security crisis may encourage Washington to invest heavily in India’s military modernization and replace its outworn military equipment with the technologically advanced American defense systems. This is going to be tough, as 58 percent of Indian defense systems are saturated with Russian military equipment, according to the 2019 report of the Stockholm International Peace Research Institute (SIPRI). Out of India’s total defense imports of $11.3 billion in 2017, imports from the United States were worth only $758 million.

China’s Perspective on the India-Pakistan Conflict

There are two lenses with which China looks at these subcontinental rivals: India’s role in the U.S. Indo-Pacific rebalancing, and Indo-Pak dynamics.

First, there are three important strategic partners of the United States in the Asia-Pacific region that are pillars of the U.S. Indo-Pacific strategy aimed at balancing the military and economic power of China.

In 2004, the United States, India, Japan and Australia founded the Quadrilateral Security Dialogue to carry out disaster relief operations and provide humanitarian assistance to tsunami victims, but it always carried an implicit anti-China role. After being shut down in 2007, it was revived a decade later, continuing the same original objective it was founded for. The new interest in the Quad arrangement is due to concerns pertaining to China’s military rise and increasing economic engagement with the U.S partners in the Indo-Pacific region, which Beijing hopes will neutralize the containment threat it sees growing in Asia.

Chinese strategy with India also follows from the same premise. Beijing seeks to woo India away from the United States and discourage it from following any of Washington’s anti-China strategies. The 2018-Wuhan Spirit signified Sino-Indian cooperation in Asian development projects and thus in leading the Asian Century. It will remain as the most important determinant of the future trajectory of Sino-Indian relations. Had China flayed India for its recent attack on Pakistani soil or had not issued a statement against terrorism, India would have felt disillusioned by China’s bonhomie. Thus, Beijing’s strategic objectives with India against the United States would have been undermined.

Second, the Indo-Pakistan dyadic dynamics. With Pakistan, China has had long-lasting strategic ties since the 1960s. In the security relationship, two factors have surfaced on top, in both the long-running and the short-term aspects. First, the long-running security interests. Since the Sino-Indian war of 1962, India has become the dominant stimulus for Sino-Pak friendship, which has therefore taken the “all-weather” moniker. It is so because India and Pakistan are perennial enemies, and arguably India and China have also remained strategic competitive powers and will continue to remain so for a long time to come.

In the latest press briefing by the Chinese foreign minister, three key phrases undergirded the Chinese view of the India-Pakistan relations: peace and stability in the region, a long-term vision and improvement of relations through dialogue and compromise, and respect for territorial integrity and sovereignty. This implies that the third point will continue to be an irritant in the trilateral relations among Pakistan, India and China. The second point will serve as the process to determine the materialization of the first point, that is, peace and stability in the region.

The second factor of the Chinese view of the Indo-Pak relationship is terrorism. In the post–India-Pakistan de-escalation scenario, Beijing has appreciated Islamabad’s counterterrorism actions and asked the world to acknowledge it. However, it remained silent when India carried out an airstrike in violation of Pakistani airspace, and has not expressed condemnation of India’s human-rights violations in Kashmir. The Chinese position on the issue of terrorism and Kashmir is similar to that of the United States, it looks forward to both countries resolving the bilateral outstanding issues politically and bilaterally.

Nonetheless, the Chinese foreign minister noted the stance as “unbiased.” Understandably, this is due to China’s strategy as mentioned above.

In the long-term perspective, while China will discourage India from becoming part of the U.S. containment strategy and increase Sino-Indian economic interdependence, Beijing will also invest in Pakistan’s military and economic development to make it parallel India’s rising power, thereby helping Islamabad to contain New Delhi within the South Asian region.

Riaz Khokhar is a research assistant at the Center for International Strategic Studies (CISS), Islamabad. He can be reached at [email protected] or on Twitter @riaz1khokhar.