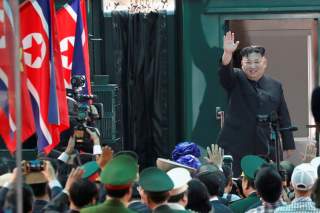 In the wake of the inconclusive Hanoi summit between President Donald Trump and North Korea’s Kim Jong-un, much commentary will focus on the clash of personalities and drama surrounding the event. There will be much speculation on whether the two countries have hit a dead end, will Trump turn his attention to other foreign-policy issues (Venezuela, Iran), will the North Koreans come back to the table after calling this a “once in a thousand years opportunity,” and so on.

While these large debates are critical to move forward, one simple lesson presents itself: namely that big-bang, grand-bargain deals are likely a bridge too far, and that the focus of both sides should shift to smaller, more manageable deals. Such deals would not require a huge leap of trust; they would respect the large ideological and strategic divisions between Washington and Pyongyang; they would be easier to arrange given the smaller scale; and they would be easier to oversee and verify.

The reporting on Hanoi strongly bolsters this contention. Both sides offered big-bang solutions. North Korea wanted substantial sanctions relief in exchange for closing the Yongbyon Nuclear Scientific Research Center, while the Americans offered full sanctions relief in exchange for total denuclearization. Ironically, both of these proposed deals were bad for the counterparty. That is, the North Korean deal, as President Trump rightly put it, was a bad deal. Yongbyon, as many have noted, is not enough of a tradeoff for sanctions. Trump is right to insist on some deal regarding extant weapons, even if total disarmament is extremely unlikely. And the American proffered deal was even more one-sided. If the North Koreans miraculously ever agree to zero out their nuclear program, then the concessions they will demand will far greater than just sanctions relief.

The outcome of this clash of grand bargains was an inability to agree to something more workable, a public breach between the two sides, a major loss of momentum, and an uncertain negotiation future. North Korea will hold to its test moratorium, but it will continue to produce missiles and warheads. The weapons problem will worsen.

This is now the second U.S.-North Korea summit to fail to achieve big results. South Korea, too, has engaged in high-level summitry, with a similar lack of a big breakthrough. All these summits have been accompanied by grandiose, inspiring rhetoric, and, based on the events of 2017, we are certainly better off. But fifteen months after détente started, neither the United States nor South Korea has clinched a workable deal with North Korea on its nuclear program.

This strongly suggests scaling down from huge deals which one side or the other will see as too risky or as too great a leap. As Kim Jong-un noted at Hanoi: there was “not enough trust to give up everything at once.”

Small- and medium-scale deals, by definition, are easier. As the stakes are lower, so are the risks. It should be easier then for both sides to agree to such swaps. If one side goes back on the deal, then the costs imposed on the loser are not that onerous. Hence, it is worth taking the chance. Smaller deals are also less disruptive at home. Both Trump and Kim face hawkish domestic opponents who likely fear giving away too much. Kim apparently had to take drastic measures to sideline these opponents, while Trump faces resistance inside the White House from figures like John Bolton, and the Democrats appear to be increasingly outflanking Trump on his right regarding the North.

A smaller scale also makes smaller deals more doable. There are simply less thing to oversee, fewer moving parts, and fewer people involved in the process. Trump’s proposal, for example, looks very much like the complete verifiable, irreversible disarmament (CVID) talked up by the White House last year. Experts predicted that even if the North miraculously agree to CVID, then it would likely take at least a decade to implement.

Finally, smaller deals are easier to verify, which is an important issue given North Korean deception in the past and Pyongyang’s sensitivity to inspectors. A grand bargain deal would require inspectors crawling all over North Korea to verify. That would generate serious tension in a closed society like the North and fire yet further bureaucratic resistance in Pyongyang to such a large deal.

The promise of the summitry since January 2018 has been that it would break through the small bureaucratic deals proposed here to genuinely change Korea’s circumstances with large gestures. This is admirable. One can certainly make argument for apex-level diplomacy given how often previous mid-level efforts with the North have seemed to drag on forever while returning nothing.

But after two summits with the American president and four with the South Korean president, a breakthrough is still not apparent or imminent. The strategic and ideological gaps are still wide; the requisite trust is still lacking; the problem of verification is still huge. It is time to shoot for something more manageable, something which will show real substance for all the rhetoric and give peace genuine momentum. At some point, this process will simply break apart if nothing more than grand language emerges, which is all we have had so far. A small but workable deal could revive it.