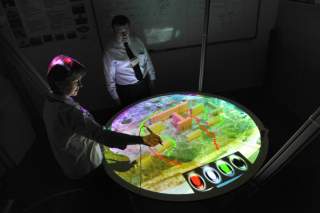 War games are considered invaluable in certain parts of Washington—not just for those who make war, but also for those who must deal with other complex and path-dependent contingencies, everything from combat to disaster response to public health emergencies. But not everyone buys into them, nor do senior leaders necessarily have the time it typically takes to participate. As a result, this approach, proven and time-tested in military circles, may not gain the wider following that it deserves, especially among senior policymakers.

So, some champions of war gaming at Brookings, Booz Allen Hamilton and a few government and nongovernmental organizations conducted an experiment earlier this summer, to streamline the process without losing any of the intellectual rigor and insight that come with it. Dubbed Brookings’s first-ever National Security Challenge, it was really more like National Security Improv, and all who played it agreed that it was a success.

Here’s what happened. A current ambassador, a former intelligence agency director and two senior Pentagon policy officials walked into the Brookings Institution to take their places as an expert panel, an eclectic group who willingly came with little warning of what was about to take place, save a brief description and assurances from the event’s organizers. Facing them across the table were three prominent national-security thought leaders—a scientist, a policy strategist and a military theorist—each armed with a “secret” near-future scenario ready to challenge the panel. And, surrounding the opposing groups, approximately fifty other national-security and war gaming experts from across government and academe, all seated in theater-in-the-round style and ready for action.

The scenarios were unconventional and uncomfortable—entirely plausible, but not the typical stuff of a traditional Pentagon war game. Two moderators from Booz Allen were there to help those assembled navigate these challenges, but the conversation, once the “fuse” was lit, was self-propelled. The crowd, composed of experts in their own right, was ready and—according to our rules of engagement—able to jump in to contribute, contest or critique based on their own experiences. Indeed, they would not have stayed if this were a lecture with a five-minute question-and-answer session. Everyone’s time is valuable, and everyone has emails to answer, but all who were present were deeply engaged in the give-and-take. We kept the cadence fast, to cover three topics in one morning, and also to maintain a highly interactive feel to the conversation. Here’s what happened.

The first of the three Challenge scenarios posited the unexpected introduction of directed energy weapons on the battlefield—by an adversary, significantly degrading our taken-for-granted access to drone-based tactical intelligence, surveillance and reconnaissance. Thus the challenge: will the United States be able to fight without its drones? There were those at the table and in the crowd that remembered warfare before Predator and Reaper. They remembered the bureaucratic and budgetary battles about fielding these unmanned aircraft in large numbers. They also remembered the policy discussions about launching death and destruction remotely, with the operators secure in a metal crate back in Nevada.

Drones have become the United States’ weapon of choice for understanding and shaping the battlefield, with air superiority guaranteeing our forces’ freedom of action. But what happens when directed energy weapons negate these systems. How should the United States respond? Invest in and deploy defensive technology? Saturate the airspace? Revert to a larger “boots on the ground” presence? Conduct ISR from space? Has drone warfare become the new “American way of war,” such that we cannot fight any other way? Or, in the words of one participant, can we fight the way we did in the 1960s?

During the discussion, the panelists considered and discarded quick and easy solutions, but they (and the audience) concluded that the true American way of war has always been to find a way to win with what we have, while leveraging strategy and foresight to ensure that what we have is what we need. This is obviously easier said than done—the future is uncertain and constrained budgets force prioritization—but in this scenario, the panelists concluded that were solutions, but that they would require sufficient lead time to ensure that the drone force is sufficiently “hardened” to meet the eventuality of tactical directed energy weapons.

Scenario 2 further examined the “American way of war” debate: in this case, what is the proper Army force structure to meet our nation’s demands? The quantity and composition of land forces takes years to shape, but worldwide contingencies, combat and otherwise, can erupt overnight. We posited a continuing decline in troop levels, especially in the Army, as projected in the 2012 Defense Strategic Guidance and the 2014 Quadrennial Defense Review, due not only to fiscal constraints, but also the political and societal fatigue resulting from more than a decade of war in Iraq and Afghanistan. Given that decline, what happens if overseas obligations, both long-standing and exigent—everything from regional face-offs in Korea and eastern Europe, to peacekeeping in the Middle East and humanitarian assistance in Africa—stretch active duty and reserve troop strength past their limits?

Even as our nation reconsiders the need for traditional ground operations, this second National Security Challenge explored the confluence of multiple, concurrent “demand signals” for troops—for counterinsurgency, counterterrorism and other special operations; global land-based deterrence and warfighting; as well as support for such non-combat-related missions as partnership and capacity building, responding to natural and manmade disasters, and so on. For decades, military planners viewed our Army as the backbone of a simultaneous two-front war, but budget pressures have whittled that strategy down, eventually forcing the reality of less expansive (and expensive) contingencies. Meanwhile, our soldiers have endured incredibly high operational tempo, and a post-Iraq peace dividend was to allow for deployment stability and further troop reductions. However, that is all taking place in the midst of renewed concerns with Russia in Europe and the emergence of ISIS. So how big is big enough?

Again, there were no easy solutions—all of the participants understood the delicate balance between fielding land forces and equipping a future high-tech military. A key theme arose: at what point does an expensive, technology-enabled force make a large standing army unaffordable? The Pentagon’s emerging “third offset” strategy has technology at its core, looking for ways to defeat mass and quantity with innovation, but while this strategy prepares the United States for near-peers, it may not satisfy the real-world demands on land forces. There were two universal agreements in that regard: first, our troops, no matter what the structure, should be adequately trained and manned for a diverse demand-set; and second, the military should maintain the capability to draw up contingent forces as needed, mainly through synchronized planning with the National Guard and reserve units.

And what about those near-peers? That was the topic of the final scenario: how to manage strategic interaction and potential confrontation with regional competitors like the People’s Republic of China. In this case, our national-security luminaries posited a U.S.-India relationship characterized by close cooperation and partnership, to include large-scale, integrated naval exercises and deployments in the Indian Ocean and South China Sea. By design, military exercises are supposed to be realistic, but that means they are also risky, and in one such hypothetical exercise, the PLAAF Air Force interferes with joint Indian and U.S. naval air operations, leading to an unfortunate aircraft mishap—an Indian fighter (operating from a U.S. carrier) collides with a Chinese plane, killing the Chinese pilot. The United States rescues the Indian aviator, but the Chinese demand that we hand him over to their authorities “for investigation.”

Like so many world events, this one starts at the tactical level but quickly escalates to a confrontation between two regional powers—with the United States in the middle. In other words, the stakes in the scenario were high (albeit artificial), and they demanded thoughtful, strategic responses from our panelists. In this instance, China was portrayed as the aggressor, but one of our participants did something that underscores the value of war gaming, even this abbreviated, “improv” kind: he started thinking like the adversary—in this case, the PRC—and in so doing, argued that from the PRC’s point of view, joint U.S.-Indian military exercises in the South China Sea, much less the Straits of Malacca or the Bay of Bengal, would be seen as an aggressive (and deliberately provocative) act that would compel an equally aggressive response. And with that bit of empathy, our policymakers were able to devise a number of U.S. and/or Indian countermoves that could defuse the situation.

In that regard, our panelists saw the aircraft accident, while tragic, as an opportunity to reinforce international norms with China. For example, one intriguing option they discussed was to actually invite China to join the maturing U.S.-Indian relationship, so long as it demonstrated a willingness to cooperate with international norms for major powers. Another option was to invite China to participate with the United States and India in a tripartite investigation into the aircraft accident, all transparent and in accordance with international law. This scenario offered a stiff test in tamping down an escalating international entanglement, but all agreed that it was a plausible one. Deepening U.S. military ties with India will likely lead to more interaction with China, and participants concluded that it was up to the United States to treat those interactions as an opportunity or a threat—and be prepared for both.