Smart 'Blockchain Battleships' Are Right Around the Corner 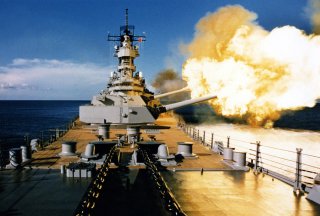 Bitcoin’s meteoric rise in 2017 made “blockchain” a household word. But Bitcoin is only one outlet for the application of the basic database architecture called blockchain. A much more important application just over the horizon is the internet of things (IoT). And the most deadly IoTs of all could be the Navy’s next generation of surface-combat ships.

How could a database technology run a battleship?

A typical U.S. surface combatant like an Arleigh Burke-class destroyer combines powerful radar systems with ninety or more missile launch cells (each one capable of launching one of a dozen different missile types), two independent Phalanx close-defense systems, and six torpedo launchers, not to mention a five-inch gun, several machine guns, and a host of other weapon systems.

The challenge is to make all these combat systems work together without blowing up the ship. America’s opponents have often fielded bigger, badder weapons than the United States, but the secret to naval success is systems integration. As the British proved at Jutland in 1916, superior fire control trumps superior firepower.

For the U.S. Navy, systems integration still means the aging but effective Aegis Combat System. Now in its fifth decade of operation, Aegis is a centralized command-and-control system that links sensors and weapons like a boxer’s brain links eyes and fists. But that very centralization is also a weakness. Knock out the brain and you knock out the boxer.

Blockchain technology lays the foundation for the distributed database management and decisionmaking. A blockchain is what it sounds like: a series of blocks of data that are chained together in linear sequence. The sequence is maintained by a link called a hash—a scrambled code that takes the entire contents of a block of data and converts it into a 256-bit reference number.

If you know that current hash, then you can’t rebuild the blockchain. But you can verify whether your version of the blockchain database is the same as someone else’s. If you both have the same hash, then you both have the same database. You don’t have to check trillions of lines of data to make sure they’re all identical. You just have to check the final hash.

The verifiability built into blockchains through their hashes means that people—and more importantly, devices—can coordinate their behavior by exchanging just 256 bits of data. If you need millisecond decision-making, blockchain is for you. And that's exactly what the Navy needs for its next generation combat systems.

Using a blockchain database architecture, the Navy can structure its next-generation combat systems around decentralized decision making nodes. That will speed up fire control while (crucially) improving survivability. Like the civilian internet we all use every day, an onboard blockchain-powered internet of things could keep functioning in a coordinated way even when the central computers go down.

Before the dreadnought revolution of the early twentieth century, naval firepower was essentially decentralized, with each battery firing more or less independently. Centralized fire control systems, first on each ship and later across whole squadrons, gave the British Royal Navy and then the U.S. Navy an overwhelming offensive advantage over their adversaries. But it introduced new vulnerabilities at the same time.

Decentralization with coordination keeps the advantages while reducing the vulnerabilities. Blockchain makes that possible because it provides a mechanism for multiple independent systems to instantly verify that they are working from the same “understanding” of the world. Independently operating artificial-intelligence processors loaded on different weapons systems can coordinate their actions because they can verify that they’re working from the same data. That’s the blockchain advantage.

Back in the twentieth century, processing power was expensive but data was cheap. That’s why in 1969 it made sense to centralize onboard decisionmaking in a single Aegis brain. Today, processing power is cheap and data is at a premium. That’s why the Navy’s twenty-first century combat systems are likely to run on blockchain.