Social Security and Medicare Shouldn't Be Taboo for the GOP 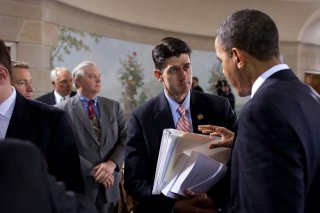 George W. Bush once vowed to spend his vaunted “political capital” on Social Security reform. Judging from the past couple weeks, he was lucky Karl Rove was with him rather than against him.

Rove’s American Crossroads GPS has been hitting vulnerable swing-state Democratic senators with ads attacking their positions on entitlement reform. There’s just one problem: Rove’s group is positioning itself to the left of these Democrats.

Consider Rove’s contribution to the Arkansas Senate race. "It’s troubling that Senator Mark Pryor said we should overhaul Social Security and Medicare," the first ad says. Both programs are obligated to pay out trillions more in benefits than they can afford.

American Crossroads is also up on the air in North Carolina. "[Kay] Hagan’s a ‘big believer’ in a controversial plan that raises the retirement age, reduces the home mortgage deduction, and increases out-of-pocket Medicare costs," the narrator of the second ad intones.

To some extent, this is just political judo: using the Democrats’ own weight—in the form of “Mediscare” attacks—against them. Pryor in particular hasn’t been afraid to demagogue Republican challenger Tom Cotton’s position on entitlements.

But any short-term gain in picking up two Senate seats could be outweighed by making entitlement reform even more difficult. Social Security and Medicare are the two biggest drivers of the country’s long-term debt. To continue on the current trajectory would require unsustainable tax increases, abrupt benefit cuts or financing these programs in ways that increase the budget deficit—coming as soon as a dozen years from now in Medicare Part A’s case.

Without reforms, there may be serious service disruptions for seniors. There certainly will be no way to keep borrowing and spending under control, and it will be difficult to avoid broad-based middle-class tax increases.

Republicans have long been incoherent on entitlements. Bush promised an ambitious Social Security reform, but failed to gain congressional support for the idea (perhaps a blessing in disguise for reform over the long term, since his partial privatization would have coincided with the 2008 financial crisis). He delivered a deficit-funded Medicare prescription-drug benefit, the biggest new entitlement since LBJ was president.

The GOP campaigned against Obamacare, simultaneously criticizing the Medicaid expansion and the Medicare cuts. Some of the Medicare criticism was fair game—the Obama administration was clearly double-counting its Medicare savings—but there was also the implication that the current, unsustainable arrangements are sacrosanct.

A big part of the problem is that Republicans are in theory the party of fiscal responsibility and limited government, which requires getting entitlement spending under control, and in practice, the party of senior citizens, meaning that many of their voters are on Social Security and Medicare.

Nevertheless, the GOP took a step forward in terms of entitlements credibility when Paul Ryan became chairman of the House Budget Committee. His budget blueprint, which can plausibly be described as “overhauling” Medicare, has passed the full House and won strong support among Senate Republicans. Even rival budget plans borrow from Ryan’s Medicare ideas.

Ryan’s plan got an even bigger endorsement from the party when he was nominated for vice president in 2012. Even the cautious and moderate Mitt Romney embraced the basics of Ryan’s approach, even if he was predictably fuzzy on the details.

The Romney-Ryan ticket did not win, obviously. But there is little evidence that entitlements were the major reason for their defeat. They won voters over 65—that is, people eligible for Social Security and Medicare—by a comfortable margin. They won a majority of voters nearing retirement age. They ran ahead of Republican Senate candidates in Florida and Montana who distanced themselves from the Ryan budgets.

One need not think these budgets are perfect—they are not—to recognize the impact on the Republican brand on entitlements.

Rove’s group could attack the Democrats for inconsistency and flip-flopping. Especially in Pryor’s case, they are denouncing their Republican opponents for flirting with ideas they have previously entertained themselves in some form. Instead they have been more opportunistic, turning back some of the party’s Ryan-led progress.

Some Republicans may think it will be worth it if the party wins back the Senate in November. A Republican-controlled Senate, the argument goes, would be able to reform entitlements. But Barack Obama will still be president for two more years and the GOP would have to defend any Senate majority in 2016.