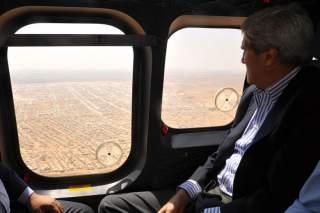 The current policy conversation about redrawing the Middle East map ignores a long-term problem that must be part of the solution: Iraqi and Syrian refugees. As nearly three million Syrian refugees have sought UN assistance in neighboring states, and more than one million Iraqis have fled this year, the international community must act now to avoid a greater security crisis. Only the promise of a better tomorrow will keep refugees from joining the conflicts in Iraq and Syria. And if the United States and the UN can’t make that promise, we can bet that ISIS will.

Since humans populated the banks of the Tigris and Euphrates, they have also contested state borders with their feet. Long before U.S. troops entered Iraq in 2003, hundreds of thousands of Iraqis and Syrians had already fled the brutality of Saddam Hussein and Bashar al-Assad. At the height of sectarian violence in the mid-2000s, the International Organization for Migration estimated that one in eight Iraqis were displaced, within or outside of Iraq. At that time, more than 350,000 Iraqis sought UN assistance in Syria and Jordan, who proved either unable or unwilling to seal their borders from the flood of refugees. Most Iraqis fled to protect their safety or to seek greater economic opportunity than their war-torn homeland could provide.

But jihadis also began to traverse the long, porous border between Syria and Iraq, smuggling insurgents and arms along with them. Assad’s willingness to tolerate this “foreign-fighter pipeline” came back to bite him when the same militants threatened his own regime after 2011. Now, those seeking survival have faced a Hobson’s choice between a ruthless Assad, a flailing Maliki, a fundamentalist ISIS, and rebels without a clue on how to govern. Jordan, Lebanon, Turkey and other neighboring states have temporarily absorbed millions of Syrians with UN support. No state wants them to stay forever; refugees live in fear that they’ll be forced out tomorrow.

The United States and the UN can’t easily fix Syria or Iraq. But assisting refugees today can keep things from getting worse. Policymakers usually view refugees as an economic burden and a security threat to neighboring states. Recent history in Afghanistan, Rwanda and elsewhere has taught us that vulnerable people fleeing conflict are susceptible to recruitment by militant groups. After all, for the desperate, any organization presents an alternative to chaos. Yet refugees are both natural allies and a rich source of human capital for those seeking to build a more stable Middle East. Humanitarian access within Iraq and Syria is perilous; reaching their citizens outside their borders is comparatively simple. Many Iraqi and Syrian refugees are highly educated, and most are interested in returning to their countries of origin and helping to reconstruct them after conflict is resolved. Refugees therefore present policy makers with an opportunity to build support for rule of law in a region that desperately needs it.

How can we help Iraqi and Syrian refugees to build a better Middle East? First, the United States should increase funding to the UN High Commissioner for Refugees (UNHCR) and its international NGO partners to provide humanitarian assistance for refugees and ease the burden on states hosting them. As the largest donor to UNHCR, the United States should lead this effort. Second, the United States and its allies should incentivize individual and corporate support for refugees. IKEA, for example, has partnered with UNHCR to become a leader in private aid for refugees, developing flat-pack shelters that now house thousands of Syrian refugees in Lebanon, and providing solar lamps to refugees in Jordan. The IKEA foundation has donated millions to UNHCR from voluntary contributions by IKEA customers. Similar private efforts should be encouraged and are likely to be politically palatable at home and abroad. Second, refugees should be trained to work in the modern economies that they will eventually rebuild. As UNHCR, NGOs and host countries set up schools and vocational programs for children and others displaced by violence, they should focus on research and programming skills that were not taught in regimes where access to information and Internet was highly restricted. Curricula should also include civic education regarding democracy and legal institutions. Finally, eventual peace agreements must include buffer zones inside Syria and Iraq to which refugees can return. With many refugees’ homes reduced to rubble, lawmakers must ensure that refugees can return to safe spaces where they themselves can rebuild their homelands.

These solutions won’t make rule of law suddenly appear in the Fertile Crescent. However, by nurturing the human capital that has spilled from its soil, we can sow the seeds for it to take root someday. The budding of hopes for a better future can mute ISIS’ call to return to the past.

Jill Goldenziel is a Research Fellow in the International Security Program of Harvard Kennedy School’s Belfer Center for Science and International Affairs. She is also a Visiting Assistant Professor at Boston University School of Law and a Visiting Scholar at the Fels Institute of the University of Pennsylvania. She is the author of a forthcoming book on refugees, U.S. foreign policy, and international law.