Sondland Abandons Trump To Defend Himself 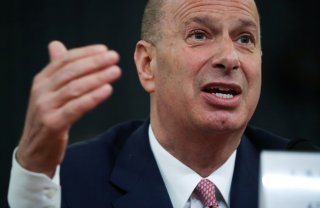 Former prosecutor Ken Starr called it “one of those bombshell days” on Fox News. He wasn’t alone. “This, on its face, is very damaging to some of the arguments the GOP has been making,” said Fox News host Bret Baer about EU ambassador Gordon Sondland’s testimony regarding the impeachment inquiry into President Donald Trump. Sondland made it clear that he viewed himself and the rest of the three amigos—Kurt Volker and William Taylor—as operating at the direct behest of Trump via his personal attorney Rudy Giuliani. “It was no secret,” Sondland said, that Trump was the author of the administration’s Ukraine effort. He further implicated Secretary of State Mike Pompeo and Vice President Mike Pence in the campaign to pressure Ukraine to announce an investigation into Burisma and the 2016 election.

The key witness who provided this “bombshell” testimony can in no way be described or depicted as a NeverTrumper. Quite the contrary. Sondland, who was wearing a $55,000 Breguet watch at the hearing, is the founder of an Oregon-based hotel chain, and a munificent donor to Republican political campaigns. In July 2018 he became Ambassador to the European Union, and since then he has been involved in the U.S. relationship with Ukraine. While Taylor appeared somewhat dour and Vindman conceited during their testimonies, Sondland was jovial and eager to answer. He seemed, if anything, to enjoy the limelight.

The ambassador’s lack of government experience showed. Daniel Goldman, the committee’s Democratic Counsel, spent the first minutes of his allotted time chiding Sondland for not taking appropriate notes during important conversations or filing memos. “[I’m] not a notetaker, never have been,” Sondland said. State Department notes in some form do exist; however, they are being withheld by the Trump administration and Sondland multiple times admonished the fact that they hadn’t been provided to him. This led to repeated iterations of “I don’t remember exactly” and memory lapses, which he says is responsible for the differences between his closed and open congressional appearances.

The primary contribution of Sondland’s testimony was to connect major administration figures to the President’s diplomatic operation in Ukraine. And at the center of this web was Giuliani. Sondland made clear his distaste for him. “Secretary [Rick] Perry, Ambassador [Kurt] Volker and I worked with Mr. Rudy Giuliani on Ukraine matters at the express direction of the President of the United States. We did not want to work with Mr. Giuliani. Simply put, we played the hand we were dealt,” said Sondland.

And, after being hinted at during yesterday’s testimony, it was confirmed that Pence was made aware of the withheld aid and the reason why. On September 1, Pence attended a meeting in Warsaw that included Ukrainian president Volodymyr Zelensky. “I mentioned to Vice President Pence before the meetings with the Ukrainians that I had concerns that the delay in aid had become tied to the issue of investigations. I recall mentioning that before the Zelensky meeting,” said Sondland. When asked what Pence’s reaction was to that, Sondland could not recall an exact response but believes he nodded. Pence’s office denied Sondland’s assertions today.

So many high-profile officials were involved in Ukrainian matters that Sondland rejected the idea he was part of some strange policy backchannel. “I’m not sure how someone could characterize something as an irregular channel when you’re talking to the president of the United States, the secretary of state, the national security advisor, chief of staff of the White House, the secretary of energy. I don’t know how that’s irregular. If a bunch of folks that are not in that channel are aggrieved for some reason for not being included, I don’t know how they can consider us to be the irregular channel and they to be the regular channel when it’s the leadership that makes the decisions,” he said.

So now that we know all of these Trump officials are connected, what exactly are they connected to?

This is where Sondland’s testimony provides a gap in the story. So far, he is the first official to testify who was in regular, direct contact with Trump. And Sondland says that Trump never told him military aid was conditioned on the investigations. By September, Sondland “presumed” the quid pro quo existed based on context clues and his own judgment.

So non-explicit were the instructions that Sondland maintains he was unaware there was a connection between Hunter Biden and Burisma Holdings for the remainder of the summer (Kurt Volker gave a similar answer yesterday). House Democrats were incredulous that Sondland could have been unaware of the publicly available information.

Sondland said that on September 9 he spoke on the phone with Trump, and asked, “What do you want from Ukraine?” Trump responded, “I want nothing. I want no quid pro quo. I just want Zelensky to do the right thing, to do what he ran on [anti-corruption].” The delay on military aid was lifted on September 11.

After Sondland recounted this exchange, Trump tweeted it out verbatim and added that the “Impeachment Witch Hunt is now OVER!” In fact, the impeachment proceedings were given a boost by Sondland’s testimony. But Democrats have not yet produced the smoking gun that would result in the ouster of Trump. So far, they have simply demonstrated that Trump’s casual approach toward staffing the ranks of his own administration has boomeranged upon him.