Sorry, Folks: A Formal Alliance with Iraq Is Not the Answer 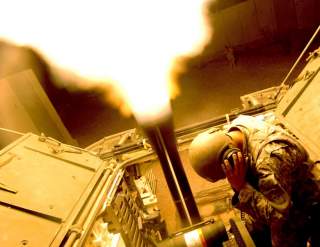 Is it time for a formal, no-holds barred, security-oriented treaty alliance between the United States and Iraq? According to Michael O’Hanlon of the Brookings Institution, one of the most serious defense analysts around in the think-tank community, the answer is simple: yes. The Iraqi government and the Iraqi army are hurting at a time when ISIL controls roughly one-fourth of the country, and if the country has any chance at moving back onto a solid footing, Baghdad needs all the help it can get. One of the more durable ways that this fantasy can become a reality, O’Hanlon argues, is through a permanent alliance that goes far beyond today’s strategic relationship between Washington and Baghdad.

“With this enduring military relationship—backing up diplomatic and economic ties as well—the United States would be in a position to cajole, persuade and sometimes even pressure Iraqis to do the right thing towards each other. The shenanigans that have characterized the country's last half-decade—including arrest warrants against respected political leaders, pogroms against competent officers in the army and extreme nepotism in the higher ranks of government—would be much harder for Iraqis of ill intent to sustain, and much easier for America to oppose, if the entire relationship were undergirded by a strong and formal alliance relationship. Determining Iraq's political future—including the possibility of some new form of confederal but still cooperative arrangement among Sunnis, Shia and Kurds—would become much easier.”

The idea that O’Hanlon puts forth in these pages is indeed an interesting one—and it happens to be based on some very sound historical evidence of Iraq’s contemporary history.

In 2006, the Iraqi government, its army and its national police force were all laced with sectarianism—the very same element that is dividing millions of Iraqis at the present day. Sunni and Shia militias were battling on the streets of Baghdad on a daily basis; government ministries became sectarian fiefdoms controlled by people directly tied to sectarian death squads; and representatives of Iraq’s Sunni community were either totally shut out from the government or marginalized to perfunctory roles. It wasn’t until the United States adopted a totally new way of prosecuting the war—broadly categorized as a mix counterinsurgency, targeted special forces operations against Al Qaeda forces, and the creation of a grassroots, Sunni-dominated, anti–Al Qaeda resistance movement—did this situation turn around. The security situation improved dramatically, but more importantly, the presence of U.S. troops in the field and the dedication that U.S. commanders exhibited towards the new strategy provided Sunni and Shia politicians with the political courage that was required to begin working together.

This is the backbone of O’Hanlon’s argument: cement a U.S.-Iraqi treaty alliance, and Iraqis like Prime Minister Haider al-Abadi, and the Sunni tribal figures who are so critical to Iraq’s stability, will find it easier to engage with one another.

Unfortunately, just because the proposal is smart and potentially rewarding in theory, doesn’t mean it’s at all practical. And therein lies the problem with O’Hanlon’s alliance strategy: it would not only be difficult to pass in the U.S. Senate, but it would also be incredibly difficult to assemble the kind of broad, domestic support so crucial to getting the buy-in of the American people.

“Forging an alliance with Iraq will strike many Americans not only as undesirable,” writes O’Hanlon, “given the saga of our nation's last decade in Iraq, but perplexing.” While accurate, this statement is not even close to grasping the bipartisan and widespread negativity that the American people feel towards Iraq as a country. For the majority of Americans, the word “Iraq” is nearly identical with the words “chaos,” “bloodshed” and “quagmire,” and it conjures up a dark reminder of a terrible period in recent U.S. history when thousands of U.S. troops were killed in a war that turned out to be launched on faulty information (not to mention a period that was made worse by the bungling of the Bush administration over the first three and a half years of the conflict).

On the face of it, this may sound like a political or partisan observation. But the legacy of Iraq is still very much ingrained in the psyches of the American public—no more so than in the minds of family members and friends who happened to lose loved ones to the conflict.

Nearly every major survey or poll bears this out. An October 15-20 Pew Research Center poll, for instance, finds that a 55-percent majority do not want any U.S. combat troops involved in Iraq in the current environment—this, despite the fact that the country is being ransacked by a bunch of raving lunatics who cut people’s heads off to make a point. In a survey from June 2014 (the same month when ISIL captured the cities of Mosul and Tikrit), 61 percent still approved of “President Obama’s 2011 decision to withdraw nearly all U.S. troops from Iraq.” In fact, 80 percent of Americans hold an unfavorable opinion of Iraq as a nation—a huge majority that would make any push to establish a U.S.-Iraqi treaty alliance incredibly difficult to get through the U.S. Senate.

The most alarming finding that captures the deep anxiety that so many Americans have with anything Iraq-related is one observed is captured by the Wall Street Journal and NBC News: “A full two-thirds (66 percent) of those surveyed said that conflict [Iraq] wasn’t worth fighting. Even Republicans who say they are voting for a more robust response to the Middle East militants say the [Iraq] war wasn’t worth it, 49 percent to 41 percent who say it was worth it.” How do you convince the American people to support a U.S. treaty commitment to Iraq with these numbers around?

Granted, popular opinion is only one factor that a commander-in-chief should take into account when making decisions about U.S. foreign policy and national-security policy. Popular opinion is not the be-all and end-all, nor should the public mood automatically close the door on options that would otherwise be considered (if public opinion was the sole factor governing a decision, the 2007 U.S. troop surge in Iraq would not have been made). O’Hanlon’s idea should be reviewed and taken into consideration, especially if Washington already plans on making a full-scale commitment to Iraq’s national stability and political health in the years ahead.

Just know, however, that from the numbers, it doesn’t look like the American people will be all too happy with a permanent U.S. troop presence on Iraqi soil. Nor will most of them be pleased to know that the U.S. military would be mandated to come to the defense of Iraq whenever its often-fractious, -sectarian, -overpaid and -ineffective politicians face a difficult security challenge. If that were the metric, U.S. troops would be on Iraqi soil for years, if not decades, to come.

Daniel R. DePetris is an analyst at Wikistrat, Inc., a geostrategic consulting firm, and a freelance researcher. He has also written for CNN.com, Small Wars Journal and The Diplomat. You can follow him on Twitter: @DanDePetris.