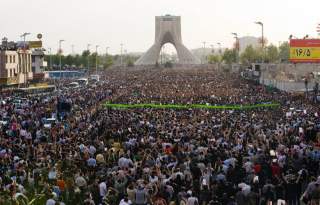 It is no secret that Iran’s political elites are divided over many issues involving a final deal Iran might strike with the West over its nuclear program. But public opinion favoring an agreement could be a major factor in reaching a positive outcome by the deadline at the end of this month.

Just as a video was leaked on May 27 showing a hardline lawmaker, Mehdi Kouchakzadeh, in a nasty exchange with Iranian Foreign Minister Javad Zarif, who leads the nuclear negotiations with six Western powers, a public opinion survey—yet to be made public—indicated public opinion favors a comprehensive nuclear deal.

A poll conducted May 27 to 29 by Information and Public Opinion Solutions (IPOS) indicates that 63 percent of those surveyed approve of a deal. In a second question: “If Iran and the West reach a nuclear deal, do you agree or disagree (with) a normalization of relations between Iran and the US?,” 52 percent agreed and 20 percent disagreed.

The poll, conducted by phone with a random sample of 680 Iranians 18-years-old and older, also shows only 12 percent of the respondents expressed conditional approval for a deal—in other words they would support it only if certain advantages for Iran are contained within a final agreement. Although a similar poll conducted by IPOS in November 2014 showed that 65 percent favored a deal, the fact that opinion has remained steadily in favor is extremely significant. Since 2010, there has been a steady decline in public support for Iran’s nuclear program, and in more recent polls, consistent support for nuclear talks with the West, even if it means curtailing the program’s scope. This support within public opinion is a good tool for the Iranian foreign ministry and President Hassan Rouhani as they try to combat hardline resistance to the deal, such as Kouchakzadeh’s. The argument between Iran’s officials is only a small example of the serious opposition to a comprehensive nuclear deal and the intense debate that occurs daily.

There are reasons for public support for a deal—which should give the Rouhani administration the political capital needed as the deadline approaches.

First, many Iranians believe the pursuit of the nuclear program is detrimental to economic development, which directly affects their lives. As part of a final nuclear agreement, United States, European Union and the United Nations sanctions would presumably be lifted, allowing Iran to sell its oil on the world market, which will dramatically increase the country’s cash reserves. Social scientists who have conducted polling inside Iran over the last two years say the public’s perception is that sanctions would be lifted immediately after a deal is struck. This could be one factor in public approval and could also be problematic if the legalities preventing immediate sanctions relief become a political pawn for the hardliners who might prey on Iranians’ expectations.

Second, and perhaps just as importantly, it is valuable for Iranians to be able to travel freely and have access to the United States and Europe. Scholars in Iran, particularly scientists and physicians, suffer professionally due to their inability to have exchanges with their Western counterparts. Iran’s electorate supported Rouhani’s presidential run in 2013 because he vowed to create a new tenor in Iran’s often blistering discourse with the West, particularly the United States. As much as Iranians may like or dislike the U.S. government, many want the hostility, a hallmark of former President Mahmoud Ahmadinejad’s administration, to end.

Third, although those in the military apparatus who are expanding Iran’s role in the Arab world believe a nuclear deal would not be in Iran’s interests, the public is generally not concerned about regional issues. Therefore, the resistance from the military establishment over the nuclear deal has little influence on overall public opinion.

In the words of Hosein Ghazian, a respected social scientist, who conducted the IPOS poll and who has conducted public surveys in Iran for many years:

I believe in advancing public policy, [and] public opinion has played a pivotal role throughout the 35-year reign of the Islamic Republic. However, this role has been incomplete and has not included all topics and people. In the first decade after the revolution, which included violence and bloody settlements, the political system was able successfully to suppress the dissidents with the support of public opinion. It’s noteworthy to remember that this support was not gathered through conventional means such as polls and surveys, [but] rather through propaganda, a media monopoly by the political system and the fact that those supporting the system were bigger numerically. More or less it is the case regarding  the nuclear issue. On the one hand, the presidential campaign slogan of Rouhani focused on the resolution of the nuclear issue which could attract many voters to him. On the other hand, public opinion now is very hopeful for [achieving] Rouhani’s attempt to achieve a good deal and combat his hard-line competitors.

Geneive Abdo is a fellow in the Middle East Program at the Stimson Center and a non-resident fellow at the Brookings Institution.