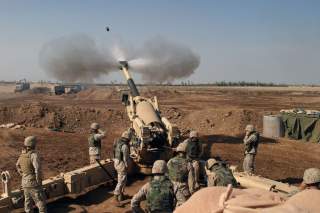 As a result of the fall of Ramadi and other Sunni areas in Iraq to the forces of ISIS, many critics are blaming President Obama for “losing Iraq.” According to his critics, for example, people like Senator Lindsey Graham (R-SC) and columnist Charles Krauthammer, if Obama had only left thousands of American troops in Iraq after 2011, there would be no ISIS or Iranian-dominated Shiite militias in Iraq. The Iraqi military would be a well-trained, well-disciplined, and well-equipped fighting force, willing and able to defend their country. This view, though widely-shared by the more hawkish conservatives, is an exercise in wishful thinking and trying to cast blame on Obama, rather than a serious counterfactual. Let’s review the false claims:

Obama failed to get an agreement to leave troops in Iraq past the 2011 deadline. Wrong.

Obama’s hands were tied by the agreement President Bush signed. Obama withdrew American troops from Iraq in 2011 according to the timetable that President Bush and Prime Minister Maliki had agreed to in December 2008, when the UN mandate that allowed the United States to occupy Iraq after the 2003 invasion expired. And even though President Obama was willing to leave between 5,000 and 10,000 American troops in Iraq, the Iraqi Parliament was not willing to modify Bush’s withdrawal agreement to allow this residual force.  Malaki even claimed that “we have repelled the invaders.”

The current woeful state of the Iraqi military is Obama’s fault—wrong.

By the time U.S. forces withdrew from Iraq at the end of 2011, the Iraqi military was in pretty good shape. Not perfect, but over $25 billion in training and eight years of U.S. training had done a lot to build up a credible, functional armed force.

Even before the American forces left, Prime Minister Maliki had begun to systematically undermine the Iraqi military, by placing his Shiite cronies in key leadership positions. Salaries have gone unpaid while “ghost” soldiers collect salaries, maintenance has been neglected, weapons sold off, and Sunnis have been pushed out. Over the past three years, the Iraqi army has unraveled. Witness the comments made by soldiers who are now on their second or third round of training the Iraqi Security Forces—they have been shocked at its current state.

And while his successor, Prime Minister Abadi, has made promises about being more inclusive, arms shipments to Sunni fighters are still not getting to the Sunni fighters. Thus, it was not surprising that these forces fled from Mosul last August, or Ramadi this month.

The rise of ISIS is Obama’s fault—wildly wrong.

The real blame for the rise of ISIS in Iraq falls both on Malaki and on President Bush. Even aside from the original sin of invading Iraq under false pretense, there were a number of early mistakes whose impacts are still being felt. After the initial overthrow of Saddam Hussein's government, President Bush did not send in enough troops to stabilize the country after overthrowing the government. Notably, he fired then Chief-of-Staff or the Army General Shinseki, who when pressed, said in testimony that the United States would need to have hundreds of thousands of soldiers on the ground. Bush compounded the problem by disbanding the Iraqi government and the military through a misguided attempt at de-Baathification, leading thousands of newly-jobless Sunnis. Finally, the selection of Maliki, who had spent his exile years in Iran, as the country’s first prime minister, ensured that sectarianism would play a dominant role in Iraqi politics.

These steps all but guaranteed that ISIS and Iran would become influential in Iraq. Al-Baghdadi, the head of ISIS, was an obscure cleric who became radicalized when the United States arrested and imprisoned him. And many of his troops and leaders were former members of the Iraqi government and intelligence services.

Similarly, ISIS itself is an offshoot of Al Qaeda in Iraq, which only came into Iraq to exploit the chaos that followed the U.S. invasion. And while it was driven out of Iraq temporarily in 2007 thanks to the strategic arming of the Sunni tribesmen in the Sunni Awakening, it regrouped in Syria and came back with a vengeance in 2014.

In the summer of 2013, towards the beginning of the Syrian civil war, President Obama asked Congress to approve U.S. bombing in Syria. In the midst of the chaotic civil war, it was already apparent that ISIS—then one of several Islamist rebel groups in Syria—was more ruthless, systematic, and disciplined than any of them. Congress, as has become typical, dithered and delayed. More worried more about political points being scored against them in their next re-election campaign than in having a serious debate about the extent of the threat. Cowed by Senator Ted Cruz’s hyperbole that bombing in Syria would turn the United States into “Al Qaeda’s air force,” the resolution never came up for a vote in the Senate or the House.

Sending more U.S. troops into Iraq is the answer—historically wrong.

There is already a robust U.S. presence in the Gulf—35,000 troops in the region—and in Iraq, where some 3,000 service members are on the ground, re-training the crippled Iraqi army.  U.S. forces have conducted over 4,000 airstrikes in Iraq and Syria. The real issue is whether the Iraqi forces are willing—and able—to fight for their country. Adding more U.S. troops without real Iraqi commitments to both defeating ISIS and working to heal the sectarian rifts in the country would be as foolish as sending more U.S. troops into South Vietnam in 1975.